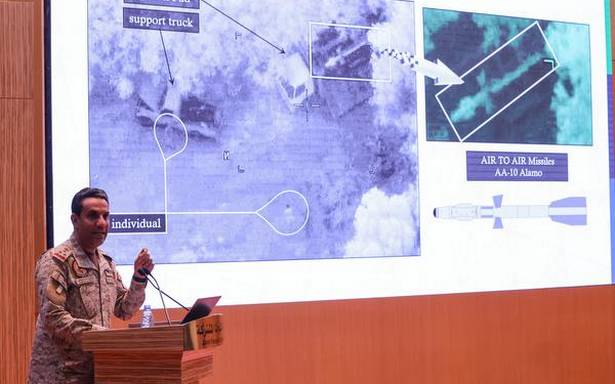 The Saudi-led coalition fighting in Yemen said on December 26 the Iran-aligned Houthi group had fired 430 ballistic missiles and 851 armed drones at Saudi Arabia since the war started in 2015, killing 59 Saudi civilians.

The spokesman of the Saudi alliance, General Turki al-Malki, said the Iran-aligned movement had been using Sanaa airport as a base to launch attacks on the kingdom, an allegation the Houthis deny.

Yemen has been mired in violence since 2014 when the Houthis took over the capital Sanaa and ousted the internationally recognised government of Abd-Rabbu Mansour Hadi. Saudi Arabia and the United Arab Emirates intervened against the Houthi movement in 2015 but the war has stalemated for years, killing tens of thousands of Yemenis, mostly civilians.

Saudi Arabia has been under pressure from Western allies to lift a blockade on Yemen ports and Sanaa airport, which contributed largely to create what the U.N. calls the world’s worst humanitarian crisis. Lifting the blockade has also been acondition from the Houthis to start ceasefire talks.

Mr. Malki denied there was a blockade on Yemen, adding that Sanaa airport remains open for U.N. and humanitarian organisations’ flights.

The conflict is largely seen as another proxy war between Middle East arch rivals Saudi Arabia and Iran. Mr. Malki shared videos with reporters which he said showed military advisersfrom the Iran-Backed Lebanese Shi’ite group Hezbollah, helping the Houthis in Yemen. Hezbollah and the Houthis deny the Lebanese group has a role in the war.