The 17th-century religious statues are draped with posters calling for social justice, and the marble floor is crowded with mattresses and sleeping bags for the migrants sheltering there, who often gather around the priest as he makes his way around. 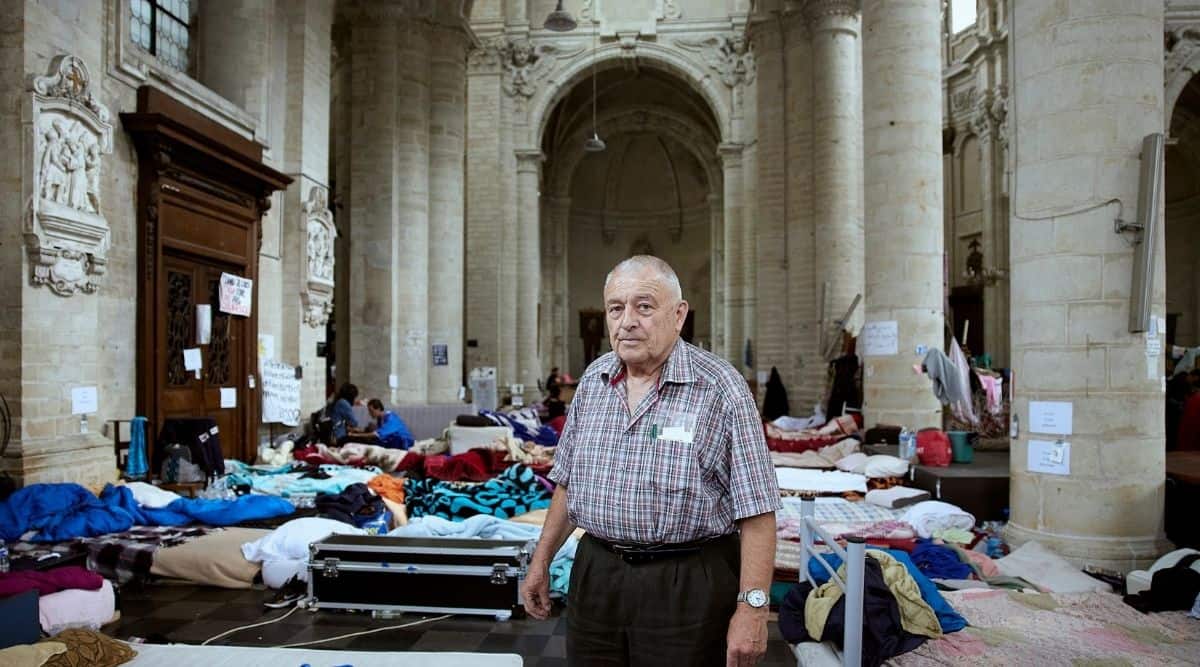 Wherever he goes in St. John the Baptist Church in Brussels, the Rev. Daniel Alliët finds himself quickly surrounded by a crowd, an unusual sight for a Roman Catholic church in largely secular Western Europe.

But St. John’s is no usual church. An impressive Baroque facade graces the exterior, but inside there are no pews, votive candles or even worshippers. The 17th-century religious statues are draped with posters calling for social justice, and the marble floor is crowded with mattresses and sleeping bags for the migrants sheltering there, who often gather around the priest as he makes his way around.

To Alliët, 77, the core of Christianity is helping those on the margins of society, and he has devoted much of his life to helping migrants living in the country without legal permission — most of them Muslims — and the urban poor. Although his church is still sanctified, not a single Mass has been celebrated there since he retired in 2019. It is an unorthodox approach, one that has raised tensions between him and more conservative members of the Roman Catholic clergy in Belgium.

He calls the migrants “modern slaves” and in an interview at the church said their plight reflected the global injustice for which the Western world bears responsibility. There are as many as 200,000 migrants of irregular status in Belgium, a nation of 10 million, according to estimates by aid organizations.

Alliët practices what he used to preach.

For the past 35 years, he has lived in community housing alongside migrants in the Brussels area of Molenbeek, a strongly Muslim area infamous as the staging ground for the terrorist attacks in Paris in 2015 and in Brussels the following year. His current housemates come from Morocco, Rwanda, Congo, Guinea and Senegal. At some point, he said, he was the only one in the house not celebrating Ramadan.

At times, Alliët sounds more like a politician than a priest. 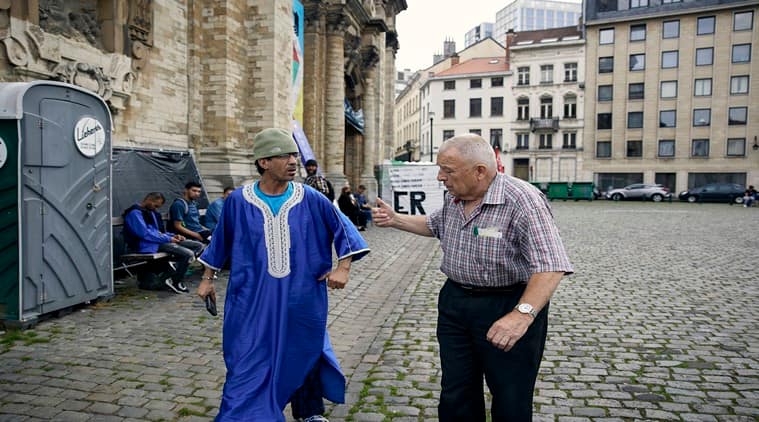 “Migrants are the victims, and we are profiting from the system,” he said, banging his fist on the table for emphasis. He has declined offers to join political parties but admits that his vocation is inherently political.

“In the end, Christ was a political revolutionary as well,” he said. “This is what got him killed in the first place.”

In a country where the migration issue became so divisive that it triggered the collapse of a government, the priest’s work has won wide praise but also been sharply criticized by immigration opponents. A right-wing politician, Theo Francken, described a recent two-month hunger strike by some 250 migrants at the church as a “lobby for open borders” and dismissed their supporters as “supernaive.”

(The protest, demanding legal status and a clear pathway to Belgian residency, was suspended in July, but the immigrant strikers, many of them homeless, remained on the church premises.)

The priest’s approach has also ruffled feathers in the church hierarchy.

“This is certainly not my approach,” the Rev. Jean Kockerols, the auxiliary bishop of Brussels, said in an interview. It is the duty of the Catholic Church to defend the most vulnerable, Kockerols said, but actions like hosting hunger strikers are not “among the best means for doing that.” In 2014, the archbishop of Brussels, André Léonard, wanted to relocate Alliët to another church but abandoned the idea after protests from local residents.

“Jesus mainly did social work as well,” said Alliët, shrugging his shoulders. “Whenever he went into the synagogue, he had problems.” Celebrating Mass, he added, is “not essential.”

Not surprisingly, Alliët has a strong following among immigrants, as well as in the surrounding area. Ahmed Manar, one of the hunger strikers, who was born and raised in Morocco, said he heard of the priest almost immediately upon his arrival in Belgium 10 years ago.

“He is like a father to all of us,” said Manar, 53, who has yet to gain residency. “It has nothing to do with religion. It shows his humanity.”

It was the fifth hunger strike by migrants in the church since Alliët became the pastor there in 1986. But as political and social attitudes toward migration in Belgium hardened, the protests became less successful. In the past, they had led to major government concessions, such as a blanket grant of residency to all the protesters.

The priest acknowledged that his work has become more strenuous in recent years, but that seems not to have tempered his enthusiasm. When he received a diagnosis of cancer last year, he did not stop working, even during chemotherapy. “My mission is what keeps me going,” he said.

Every year, Alliët allows himself time off from his mission for a four-day excursion through the Ardennes, the Belgian mountains. He is also a dedicated biker, though he has regularly been struck by a notorious Brussels curse: bike thieves. “I’ve had 16 bikes stolen from me in the last 35 years,” he said.

He was born into a poor farming family of 10 in a small village in Flanders, the Dutch-speaking region of Belgium, and said he was a Catholic only because of where he came from. “If I were born somewhere else, I would have been a good Muslim,” he said. “God is too great to lock him up in one religion.”

Alliët credits his mother for his resilience and strong values. She was 33 when her husband died in an accident, left on her own with eight children and pregnant with the ninth. “She taught us that being human is about helping others, not about having a big house,” he said.

The lesson sank in. One of his brothers is now a priest working in El Salvador, and a sister worked in a Christian aid organization in Congo. After Alliët graduated from the seminary, his superiors convinced him to take a job in academia and, later, in the charity sector. He worked as a philosophy professor at Leuven University and ran the Flanders branch of Caritas, a Roman Catholic aid group.

But he wanted to do more.

“I became a priest to help those in need,” he said. “We made a compromise, and when I turned 40, I quit and moved to Brussels.”

Belgium is one of Europe’s richest countries, but Brussels is a city of stark contrasts, with 30% of its residents living below the poverty line. Poverty levels are even higher among those with foreign roots, many of whom live near St. John the Baptist Church.

Alliët sees his work in part as an effort at redemption for Belgium’s brutal colonial past, which it has only just begun to address. “When Belgium colonized Congo, no one thought about showing any documents,” he said. “We just went anywhere we wanted and took whatever we felt like.”

After Alliët retired in 2019, Kockerols, the auxiliary bishop, wanted to transform the church into a museum of religion, but the priest resisted. “I told him that this is not how you connect with people,” he said. “I went to see the pyramids in Egypt. It was very impressive, but that did not turn me into a worshipper of Tutankhamen.”

Eventually, church authorities backed down. The archbishop named a successor to Alliët, but that priest’s role to date has been mainly symbolic.

There is dissonance between the teachings of Christ and the attitude of some clergymen, Alliët said. He believes that while the selection of Pope Francis has helped correct the imbalance, a lot remains to be done. “But we are lucky,” he joked. “We finally got a pope who is trying to be Christian.”

Despite the difficulties, the priest remains hopeful about the future.

“This work is like the procession of Echternach,” he said, referring to a Roman Catholic tradition from nearby Luxembourg where the participants take three steps forward and two back. “You advance slowly, but you nevertheless move ahead,” he said.