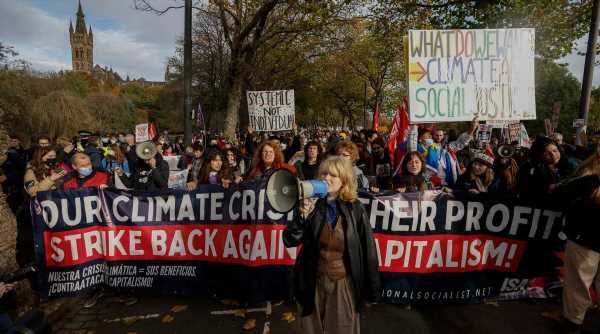 A draft agreement released Friday morning called for a doubling of money to help developing countries cope with climate impacts and said nations should strengthen their emissions-cutting targets by next year. 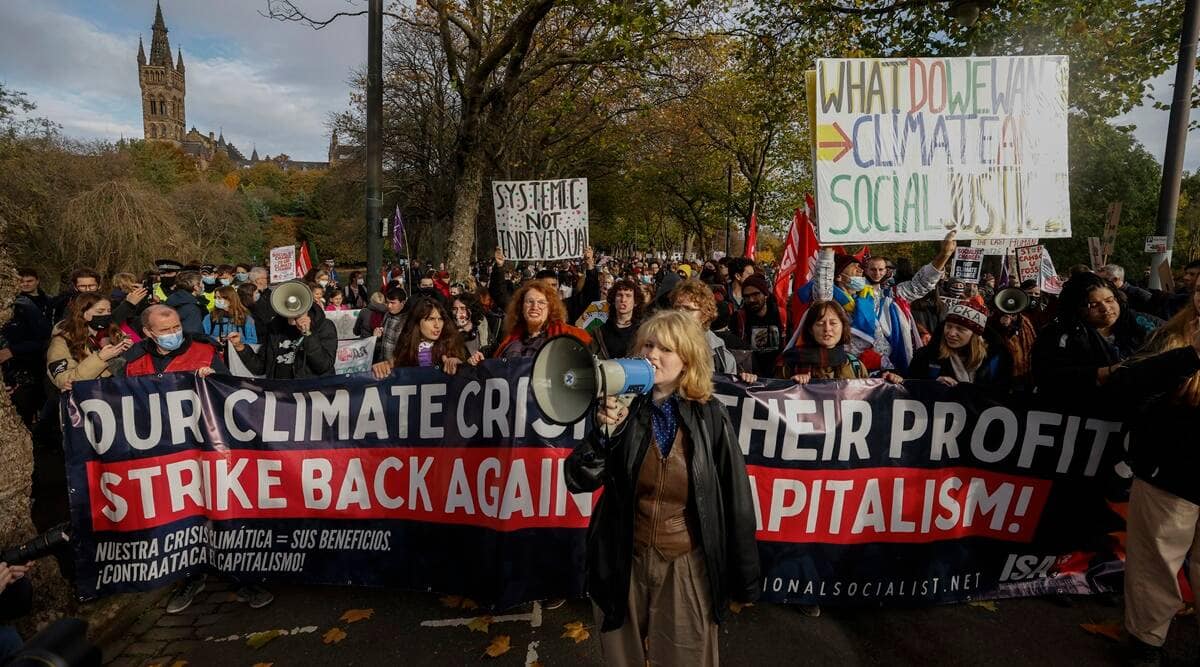 International climate talks went into overtime Friday evening, as negotiators wrestled behind closed doors over several sticking points in an agreement that could determine whether nations can prevent the planet from growing dangerously hot by midcentury.

A draft agreement released Friday morning called for a doubling of money to help developing countries cope with climate impacts and said nations should strengthen their emissions-cutting targets by next year. The document urged countries to accelerate a coal phaseout and eliminate subsidies for fossil fuels.

Negotiators from about 200 countries worked into Saturday morning, arguing over several aspects of the document, including money for developing countries suffering the worst impacts, how to structure a global market for carbon, and whether countries should be asked to return next year with stronger emissions plans.

They even disputed whether the final agreement should mention the words “fossil fuels,” which have never before appeared in a global climate agreement even though their combustion is the principal cause of climate change.

One of the most divisive questions involves whether industrialized countries that have prospered by burning coal, oil and gas should pay developing countries for the irreparable harms they have caused.

The state of the negotiations reflected intensifying pressure on polluter countries to not only reduce greenhouse gas emissions far more quickly than they have been willing but also to address the damage that those emissions have exacted on countries least responsible for the problem.

“There’s a huge disconnect between where we are, where we will be based on current projections and where we need to be in terms of what science is telling us,” said Saber Hossain Chowdhury, a negotiator from Bangladesh.

A new draft text was expected Saturday morning, according to summit organizers. To reach a final agreement, all parties must approve. By tradition, if one country objects to language in the agreement, the talks can deadlock.

The summit host, Britain, had said its goal was to ensure that the planet would not heat more than 1.5 degrees Celsius (2.7 degrees Fahrenheit) by 2100, compared with preindustrial times. That is the threshold beyond which scientists say devastating heat waves, fires and floods become significantly more likely.

That goal is nowhere within reach.

The world has already warmed an average of 1.1 degrees Celsius since the Industrial Revolution, although some places have already heated more than that. One analysis found that even if all the pledges made in Glasgow are kept, temperatures will still skyrocket by 2.4 degrees Celsius by 2100.

The Kenyan environment minister, Keriako Tobiko, noted that an average global temperature rise of 1.5 degrees Celsius would translate into 3 degrees in Africa, intensifying erratic patterns of rainfall and drought that are already punishing farmers.

Pressure mounted throughout the day to deliver a strong final document. At noon, more than 700 climate activists marched through the convention center where the summit is being held, chanting “climate justice” and calling for more ambitious targets. They spilled out into the streets to join noisy throngs of more protesters.

The demonstrations enlivened the two-week proceedings, which have been dominated by well-crafted speeches onstage and arguments over verbs in small meeting rooms. But they also served as a reminder to politicians and diplomats of the demands of ordinary citizens. Midway through the summit, over the course of two days, more than 100,000 protesters filled the streets of Glasgow, many of them young people, angrily demanding that world leaders take aggressive action to deal with the climate crisis.

A British diplomat closely following the negotiations said talks would go down to the wire.

“There are a number of key issues still in play here, and we’re still some distance from reaching an outcome,” said David Waskow, international climate director at the World Resources Institute, a Washington-based environmental think tank.

The latest draft also “requests” nations to return every year to strengthen their emissions-cutting targets until the 1.5 degree Celsius goal is within reach. In diplomatic terms, that is tamer than “urges,” which was used in the previous draft.

Even at current temperatures, Chowdhury said, “we see the destruction, the devastation, the pain, the suffering that all countries of the world are facing.” He received sustained applause from delegates in the plenary hall.

The latest draft calls on countries to accelerate “the phaseout of unabated coal power and of inefficient subsidies for fossil fuels.” Unabated coal refers to power plants that do not capture their carbon dioxide emissions using a nascent technology not currently available on a commercial scale. The language would allow power plants with the technology to continue burning coal and is a change from previous language asking nations to “accelerate the phasing out of coal and subsidies for fossil fuels.”

The world spends about $423 billion each year to subsidize oil, gas and coal, about four times the amount needed to help poor countries address climate change, according to the U.N. Development Program.

Officials from other countries argued that the words “unabated” and “inefficient” should be removed from the agreement.

“We need clear language on the need to eliminate all fossil fuel subsidies, not only the inefficient ones, and to accelerate the phaseout of coal power,” said Andrea Meza, Costa Rica’s environment minister.

Kerry defended the language about unabated coal, saying commercial carbon capture technology could be available in the future.