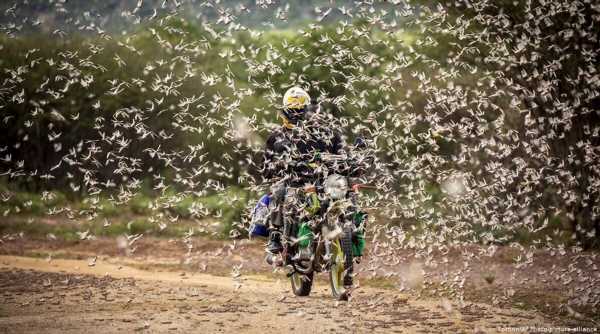 East Africa has not just suffered from the 2020 coronavirus pandemic, but also the worst locust plague in decades. Now, the swarms are returning, and experts are concerned about food security in the region. Leion Sotik has lost everything. The farmer living in Garissa County, Kenya, still remembers what happened just a year ago, right during harvest season. The invaders came — and destroyed everything on his maize plantation. “I am very desperate,” he told DW. “I was expecting a harvest to feed my family and take the children to school. Look at how my crops have been destroyed. Everything is gone now.”

The culprits are one of the world’s oldest pests and probably have their most famous reference in the Old Testament’s Book of Exodus: Locusts. In 2020, a plague of the hoppers invaded East Africa, ravaging crops and pastures and driving the level of human hunger and economic hardship higher in parts of the region. One year later, right at the start of 2021, the United Nations has warned that a second and maybe even deadlier re-invasion of locusts has already begun.

Trillions of locusts in East Africa

The first wave of the pests emerged at the end of 2019, numbering in hundreds of billions, multiplying by a factor of 20 per generation, according to the UN Food and Agriculture Organization (FAO). The second generation in March and April numbered in the trillions. A plague that spread like wildfire — up to now.

“It’s a continuation of the 2020 locusts swarm. The adults have flown to various areas and are laying eggs”, Frances Duncan, Professor of Animal, Plant & Environmental Sciences at the University of the Witwatersrand, told DW. “If we have good rains like it is the case at the moment in most areas, the hoppers will hatch, and we get the second wave of the swarm.”

However, Keith Cressman, FAO’s Senior Locust Forecasting Officer, remains optimistic. “I think it’s still a very dangerous situation. But it should not be worse as it was last year.” According to the weather forecast, the months to come should be dry, reducing the locusts’ reproductive rate.

Kenya was heavily affected by the worst invasion of locusts in 70 years. In Garissa, the insects have driven farmers into despair: Their farms’ total yields in 2020 were destroyed in less than 24 hours.

Nur Fadhil remembers that they had no chance against the plague. “We have tried chasing the locusts away, but our efforts were in vain. The locusts spent the night on our farms. When we woke up the next day, they were still here. They had munched on everything on the farm. We have gone through massive losses,” Fadhil said.

In an emergency case, the FAO is ready to step in, Cressman told DW in an interview. “We are constantly monitoring the locusts’ situation, the weather conditions, and provide service to all countries in the world in terms of early warning and forecasting so they can be prepared to respond.” The FAO is supporting control operations financially through pesticides, aircraft, and sprayers.

Cressman emphasized that the livelihoods of the population need to be protected. “If a farmer has crops planted and his crop has been wiped out, and he does not have resources to buy new seeds to replant, the FAO can assist. For pastoralists, if there is not enough food for animals, the FAO can provide animal feed.”

Breeding in Ethiopia and Somalia

Five countries have been especially hard hit by the African migratory locusts: Ethiopia, Kenya, Somalia, Sudan, and Yemen. As a result, more than 35 million people suffer from food insecurity. FAO estimates this number could increase to 38.5 million if nothing is done to control the new infestation.

The FAO warns that numerous immature swarms have already formed in eastern Ethiopia and central Somalia during December, now they have reached northern Kenya. More swarms will arrive in January and spread throughout Ethiopia and Kenya.

“If the locust swarm is not controlled, it can completely destroy the crop and wipe out animal feed. This poses a serious threat to food security in the region and can lead to human and social crises,” Amh Yeshewas Abay, Head of Natural Resources Office in South Omo Zone Hamer Woreda in Ethiopia, said in a DW interview. “We are working to eradicate locusts in northern Kenya and on the border with Somalia.”

In northern Somalia, swarms laid eggs in areas affected by Cyclone Gati. Heavy rains in the region had turned out to favor the locusts, the UN says. New immature swarms could start to form in early February. Adult groups and a few swarms appeared on the coast of Sudan and Eritrea in December.

According to Daniel Lesego from Kenya’s National Disaster Management Unit, the locust invasions come with multiple risks apart from food insecurity. “If there will be competition over pasture, space, and water, then it is likely to trigger conflict, resource-based conflict, and that is something that we do not want to see in Kenya,” he told DW. “For us, this is a national call. It is a national duty that we are responding to and are committed to ensuring that locusts in Kenya are eradicated to make sure that locusts do not cross to our neighbors.”

1.3 million hectares of locust invasion were treated across 10 countries since January last year to stave off an economic and agricultural catastrophe, according to the UN. Countries have prepared themselves to use pesticides on the ground and from the air. It helped to prevent the loss of around 2.7 million tons of cereal.

“Countries have been alerted to this possibility for a couple of months. They have been preparing, mobilizing their teams and getting them into the field to doing the monitoring, identifying locusts and doing ground control operations, supported by aerial operations,” Cressman said, adding that the goal would now be to treat as many swarms as possible, “before they spread, mature, and lay eggs for another generation of locusts.”

The Kenyan government has set aside $30 million (€24 million) to fight the second wave. Agriculture Minister Peter Munya told journalists that Kenya is well-equipped to fight the locust swarms and promised that in counties where crops and livestock have been lost, the government would intervene to help distribute seeds, cereals, clean water, or fertilizers.