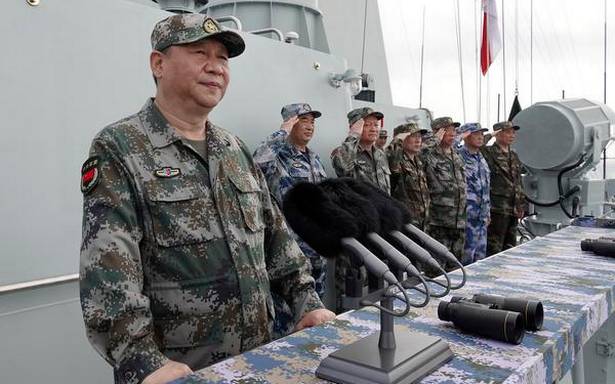 China’s President Xi Jinping on Tuesday signed an annual mobilisation order to mark the start of this year’s training for the Chinese military, with an emphasis on “combining training with combat operations”.

The training mobilisation orders are issued by Mr. Xi, who also heads the Central Military Commission (CMC), usually in January and the mobilisation orders have in the past impacted how the People’s Liberation Army (PLA) carries out its exercises that often begin in the subsequent weeks following the order.

The official Xinhua news agency said Mr. Xi signed this year’s order on Tuesday and "declared the start of military training for the year.”

"The entire rank and file of the armed forces are required to resolutely implement the plans and instructions of the Party leadership and the CMC, according to the order, adding that the changing landscape of national security and combat circumstances must be accurately understood,” the report said.

"The armed forces must closely follow the evolution of technology, warfare and rivals, redouble their efforts to better combine training with combat operations, and strengthen systematic training and the use of technologies to develop an elite force that is capable of fighting and winning wars,” the order said, adding that “all officers and soldiers should uphold the spirit of fearing neither death nor hardship, and conduct training in a vigorous, well-designed and safe manner to boost their commanding and fighting capability and foster excellent conduct.”

The order in 2021 had similarly emphasised “enhancing training in real combat conditions”. Mr. Xi had also issued an order on training in combat conditions in January 2020. Four months later, the PLA deployed two divisions right up to the Line of Actual Control (LAC) in Eastern Ladakh after the completion of routine exercises, sparking the worst crisis along the India-China border in decades.

Twenty months on, disengagement is yet to happen at several locations along the LAC after multiple rounds of diplomatic and military talks, while tens of thousands of troops remain deployed in forward areas. The PLA has also continued to build infrastructure in forward areas to sustain its deployments through the winter, while India has matched the PLA’s build-up with its own deployments.

The training mobilisation order in January 2020 had called for strengthening military training in combat conditions and it was seen by observers as altering the pattern of annual exercises and forward deployments not only closer to the LAC but also in other theatres, leading to tensions in the South China Sea as well.