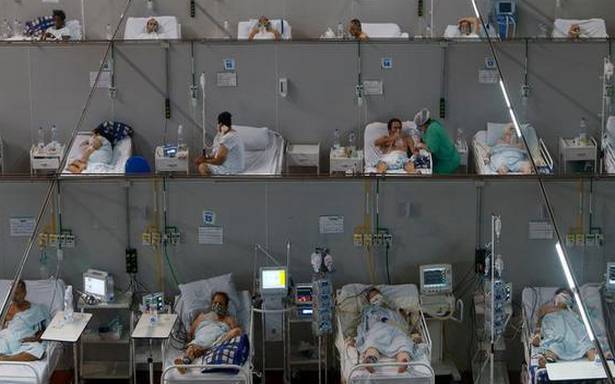 World Health Organization has declared that mutation a “variant of concern,” like another that emerged in Brazil.

Brazil’s COVID-19 death toll surpassed 450,000 on Tuesday, as delays plague the hard-hit country’s vaccine rollout and epidemiologists warned a brutal new surge of the virus could be coming.

The health ministry reported 2,173 deaths in the past 24 hours, bringing the official number of lives lost to the coronavirus in Brazil to 452,031, second only to the United States.

The situation has stabilized somewhat, with an average of 1,854 COVID-19 deaths per day over the past week — down from more than 3,000 in mid-April.

But the number of infections has been rising steadily since early May, to an average of 66,000 per day over the past week, making epidemiologists fear the death toll is about to start rising again, too.

With 215 COVID-19 deaths per 100,000 inhabitants, Brazil is the hardest-hit country in the Americas, and among the worst affected in the world.

Experts say the latest increase in infections is partly caused by state and local authorities lifting pandemic restrictions a month ago when the curve showed a slight decline.

The slow pace of vaccination is not helping. Around 20% of Brazil’s 212 million people have received a first vaccine dose, and 9.9% a second — still too few to meaningfully slow the virus.

In a worrying development, Brazil registered its first cases of the so-called Indian variant last week, in six crew members of a Hong Kong-flagged ship.

The World Health Organization has declared that mutation a “variant of concern,” like another that emerged in Brazil. Both are feared to be more dangerous than the original strain.

The Indian variant has not been confirmed to be spreading locally in Brazil.

But “I think it’s only a matter of time,” said researcher Margareth Dalcolmo, of leading public health institute Fiocruz.

“The Indian variant is very difficult to contain,” she told CNN.

Brazil’s Senate has opened an inquiry into why the country’s COVID-19 death toll is so high, casting a spotlight on far-right President Jair Bolsonaro’s unorthodox pandemic response.