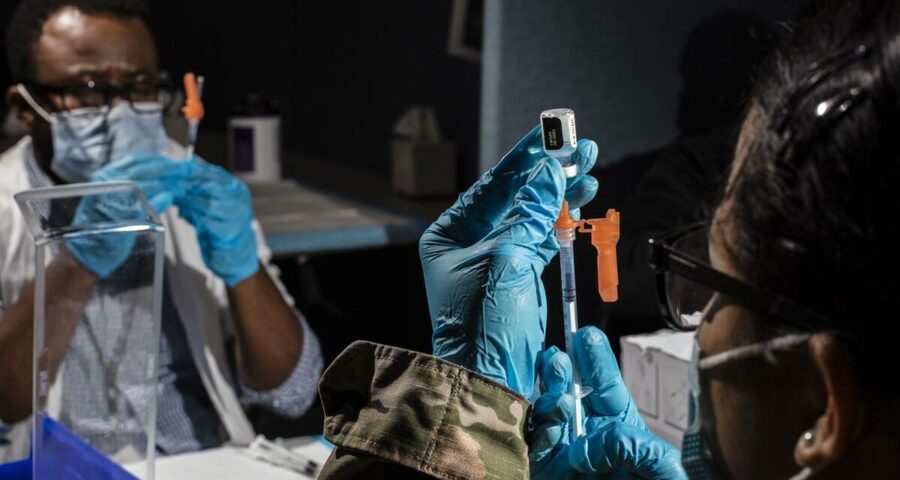 Senior officials now say they expect that people who are 65 and older or who have compromised immune systems will most likely need a third shot from Pfizer-BioNTech or Moderna, two vaccines based on the same technology that have been used to inoculate the vast majority of Americans thus far. Senior officials now say they expect that people who are 65 and older or who have compromised immune systems will most likely need a third shot from Pfizer-BioNTech or Moderna, two vaccines based on the same technology that have been used to inoculate the vast majority of Americans thus far. That is a sharp shift from just a few weeks ago, when the administration said it thought there was not enough evidence to back boosters yet.

On Thursday, a key official at the Centers for Disease Control and Prevention said the agency is exploring options to give patients with compromised immune systems third doses even before regulators broaden the emergency-use authorization for coronavirus vaccines, a step that could come soon for the Pfizer vaccine.

Dr. Amanda Cohn, chief medical officer of the CDC’s immunizations division, told an advisory committee to the agency that officials were “actively looking into ways” to provide certain people access to booster shots “earlier than any potential change in regulatory decisions.”

“So stay tuned,” she added.

The growing consensus within the administration that at least some Americans will need a booster is tied in part to research suggesting that the Pfizer vaccine is less effective against the coronavirus after about six months. More than half of those fully vaccinated in the United States so far have received Pfizer’s vaccine, in two doses administered three weeks apart.

Pfizer’s continuing global study of its clinical-trial participants shows that four to six months after the second dose, the vaccine’s effectiveness against symptomatic infection drops from a high of 95% to 84%, according to the company.

Data from the Israeli government, which has fully vaccinated more than half of its population with Pfizer doses since January, also points to a downward trend in effectiveness over time, although administration officials are viewing that data cautiously because of wide margins for error.

The most-recent figures from the Israeli Ministry of Health, released late this week, suggested that Pfizer’s vaccine was just 39% effective in preventing infection in that country in late June and early July, compared with 95% from January to April.

In the U.S., Dr. Anthony Fauci, who heads the infectious-disease division of the National Institutes of Health, said he was surprised by the apparent steep falloff in the Pfizer vaccine’s effectiveness that the Israeli seems to suggest. He said he wanted to compare it with data that the CDC had been gathering from cohorts of thousands of people across the United States. “People are sort of raising their eyebrows a bit,” he said.

While other questions abound, senior administration officials said it appeared increasingly clear that the vaccines would not grant indefinite immunity against the virus and that boosters might be necessary for at least some people perhaps nine months after their first shot. The administration has already purchased more than enough vaccine to deliver third doses of both Pfizer and Moderna, and has been quietly preparing to expand the distribution effort, should it become necessary.

With so little data yet public, many health officials and experts have spoken cautiously about booster shots. Dr. Paul Offit, a member of the Food and Drug Administration’s outside advisory committee of vaccine experts, said a rise in mild or moderate cases of COVID-19 among vaccinated people did not necessarily mean a booster was required.

“The goal of this vaccine is not to prevent mild or low, moderate infectious disease,” he said. “The goal is to prevent hospitalization to death. Right now, this vaccine has held up to that.”

Prematurely dangling the prospect of a third dose could also work as a deterrent against vaccination, other health experts warn. If Americans think that immunity from the vaccines is short-lived, they said, they may be less likely to get their initial shot.

“We don’t want people to believe that when you’re talking about boosters, that means that the vaccines are not effective,” Fauci testified at a congressional hearing Tuesday. “They are highly effective.”

Among the vaccine manufacturers, Pfizer has been especially proactive in sharing its data with the government. But the administration was taken aback by the company’s public announcement this month that it planned to seek emergency authorization from the FDA for a booster shot.

The company said early data from its booster study showed the level of neutralizing antibodies among clinical trial participants who received a third dose six months after the second was 5 to 10 times as high as among two-dose recipients.

Fearful the American public would get the wrong message, the FDA and the CDC reacted with an unusual public statement saying, “Americans who have been fully vaccinated do not need a booster shot at this time.” They added: “We are prepared for booster doses if and when the science demonstrates that they are needed.”

Typically, the FDA would authorize use of a booster, perhaps after a meeting of its outside advisory committee. Then the CDC, which has its own advisory committee, would need to formally recommend it, Offit said.

But if the FDA fully licenses a vaccine, doctors would have vastly more leeway to prescribe a booster for their patients. Some health experts expect that Pfizer could receive that approval by fall.

At the CDC advisory panel’s meeting Thursday, Cohn, the medical officer for the vaccine division, suggested it might be possible to offer booster shots to those with weakened immune systems through an investigational study or other avenues, without waiting for the FDA.

Dr. Camille Kotton, an infectious-disease expert with Massachusetts General Hospital, told the panel that some patients, especially those who are more educated or “empowered to take care of their own health care,” are managing to get a third dose on their own, despite the lack of a green light from the government.

“Many have taken matters into their own hands,” she said. “I am concerned about them doing this kind of in an unsupervised fashion,” she said, while doctors’ hands are tied because of the lack of regulatory approval.

People with compromised immune systems make up 2.7% of the population, according to the CDC, and include those with cancer, organ or stem-cell transplants or HIV, among other conditions.

At Tuesday’s hearing of the Senate’s health committee, several senators grilled administration health officials on how soon they would act on the question of boosters. Sen. Mitt Romney, R-Utah, said he was unhappy that officials could not provide a better timetable.

Sen. Richard Burr, R-N.C., noted that Israel was already offering some of its most vulnerable citizens a third shot. “Why aren’t we making the same decisions?” he asked.

Dr. Rochelle Walensky, director of the CDC, testified that scientists were studying the vaccines’ efficacy in tens of thousands of people, including nursing-home residents and more than 5,000 essential workers.

“Fortunately, we’re anticipating that this will wane and not plummet,” she said of their efficacy. “As we see that waning, … that will be our time for action.”

Pfizer is expected to soon publicize its clinical-trial research about waning immunity and the benefits of a booster shoot in articles in a peer-reviewed journal. Moderna has yet to release data on any booster studies.

Johnson & Johnson’s one-shot vaccine has so far played a minor role in the nation’s vaccination campaign. Clinical-trial data on how that vaccine works with two shots is expected next month.