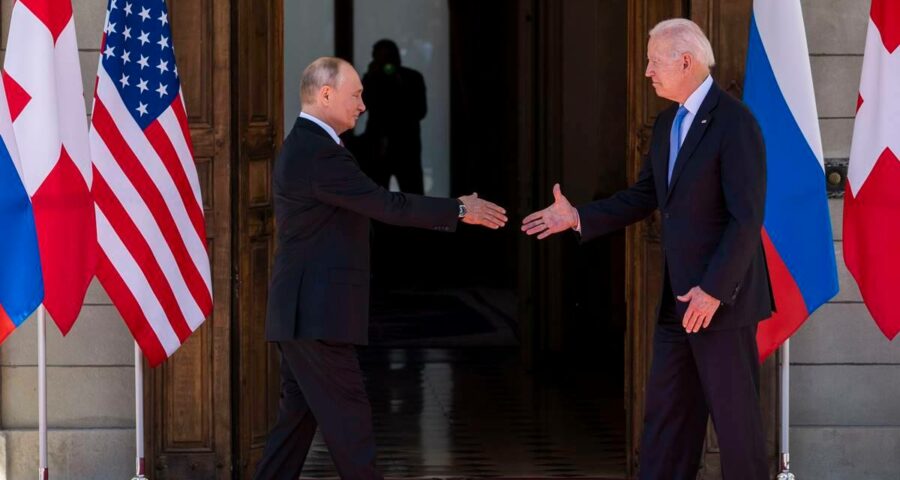 Both Biden and Putin expressed a desire for a better relationship, but announced no dramatic actions to arrest the downward spiral that has already hurtled them toward the worst U.S.-Russian tensions since the Cold War. A highly anticipated first summit meeting between President Joe Biden and President Vladimir Putin of Russia ended early on Wednesday and was described by both sides as a series of polite but adamantly stated disagreements about which country is the greater force of global disruption.

After four hours of talks, the two leaders emerged, separately, and offered professional respect for each other, like two skilled boxers describing the other’s prowess. Both expressed a desire for a better relationship, but announced no dramatic actions to arrest the downward spiral that has already hurtled them toward the worst U.S.-Russian tensions since the Cold War.

In dueling news conferences on the edge of Lake Geneva, a traditional site for two of the world’s most powerful antagonists to discuss their differences, the two leaders committed to the creation of working groups to deal with urgent issues, starting with arms control and the proliferation of cyberattacks. They agreed to send ambassadors back to each other’s capitals, Putin said, and expressed interest in working in some areas of mutual interest, from the Arctic to Afghanistan.

“There has been no hostility,’’ Putin said, speaking about the meeting.

Biden declared “I did what I came to do,’’ including laying out a series of warnings and red lines for the Russian leader, which he insisted were not “threats.”

Biden emerged offering some modest optimism that America has restored its alliances with Europe and has made Putin more cautious about any actions regarded as being against American interests.

“I think the last thing he wants now is a Cold War,’’ Biden said at his news conference, describing Putin as the struggling leader of a declining economy who was worried about the growth of an expansionist, aggressive China on his border. 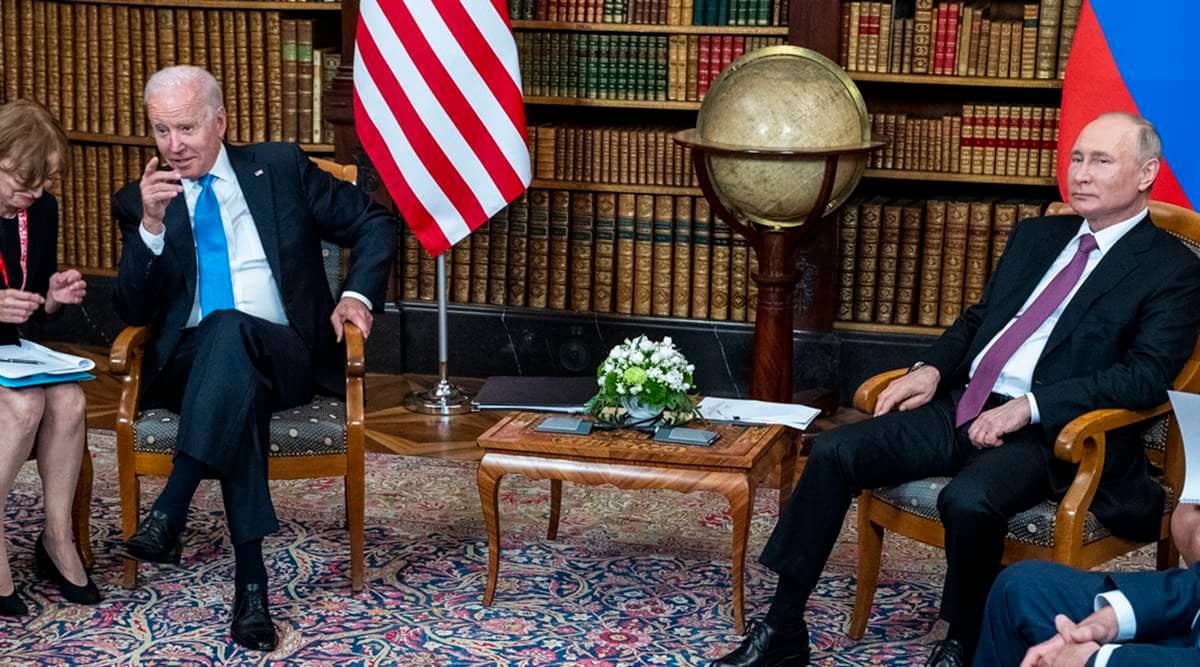 But Biden also said he had handed the Russian leader a list of 16 examples of “critical infrastructure,’’ and had made clear that if they were attacked, “we have significant cybercapabilities” and would respond “in a cyberway.”

Biden said there had been no hyperbole and no talk of military intervention in their exchanges, which he described as “simple assertions.” But his warning that accelerating Russian cyberoperations would get an in-kind response could signal a significant escalation in the daily cyberconflict now underway among major and lesser powers, including China, Iran and North Korea.

U.S. officials have usually shied away from major cyberoperations against Russia, fearing that they might not be able to control the escalation of strikes and counterstrikes. While Biden has begun a crash effort to reduce the vulnerability of American assets, from pipelines to power plants, it is an effort that will take years, and will never protect every weakness.

Putin, for his part, denied that Russia had been responsible for the range of attacks on the United States. His denial seemed to include both the sophisticated attacks like SolarWinds, revealed last December, that U.S. officials said had been launched from Russia’s premier intelligence agencies, and ransomware attacks that Biden has said came from criminals harbored on Russian soil.

In his news conference, Putin turned the accusations back on Washington, asserting that the United States was responsible for a far larger number of malicious cybercampaigns than Russia.

Putin then refused to take any responsibility for human rights violations or the invasion of parts of Ukraine, offering assertions about wanting a better relationship with the United States, but no assurances that he planned to change Russia’s behavior.

Asked about the imprisonment of political rivals, like Alexei Navalny, Putin said Navalny had broken the law. The Russian leader also engaged in familiar what-aboutism, referring to the killing of George Floyd by a Minneapolis police officer and then adding, “What about Guantánamo?’’ a reference to the detention center where the United States still keeps a small number of prisoners plucked off the battlefields in counterterrorism operations.

By the end of the day, it was clear the two men had resolved few of their longstanding differences and kicked over several of them to working groups of senior officials that Biden said would be given six to 12 months to report back.

Biden described the “Strategic Stability Dialogue,” focused on new nuclear weapons that fall largely outside the categories currently covered by the few remaining nonproliferation agreements, as the first test of Putin’s seriousness.

The leaders also issued a joint statement promising to hold arms-control talks and pledging that “a nuclear war cannot be won and must never be fought.” It was a statement that reached back 36 years, to a meeting between Ronald Reagan and Mikhail Gorbachev, in 1985, also in Geneva.

But the contrasts between that session and this one spoke volumes. Reagan had famously called the Soviet Union the “evil empire,’’ but he and Gorbachev spent hours talking inside and outside, dined together, and tried to get to know each other. In the hours before Biden’s encounter with Putin, his aides made clear that they would not break bread, and that the meetings would be formal ones.

Though it was a beautiful day, and they were meeting on a former estate that had trails down to the lake, they never explored the gardens, or left the impression they were trying to get to know each other. It was purely business, Biden said. It ended an hour earlier than administration officials had anticipated.

The meeting was performed with delicate choreography, seemingly designed to avoid a display of any camaraderie. Putin arrived first, straight from the airport, and was greeted on the red carpet in front of a lakeside villa by President Guy Parmelin of Switzerland. About 15 minutes later, Biden arrived in his motorcade, shook hands with Parmelin and waved to reporters.

The Swiss president welcomed the two leaders, wishing them “fruitful dialogue in the interest of your two countries and the whole world.” He then stepped aside, allowing Biden and Putin to approach each other, smiling, and shake hands.

Biden seemed energized by the encounter, at one point taking off his jacket while answering a question at his news conference, and putting on his signature sunglasses to signal he was ready to wrap up a weeklong trip through Europe and head home. Yet he stayed around the news conference site for several minutes, answering shouted questions.

Yet at the end of the day it was unclear whether anything he saw or heard led to a revision of his view of Putin. Biden declined to say whether he would still describe the Russian leader as a “killer” and argued that none of the conversation portended the start of a friendship.

While the leaders retained their starkly diverging worldviews, there were moments in their separate news conferences in which they appeared surprisingly in sync. Putin called Biden “constructive, well-balanced and experienced,” and said he wanted agreements on “rules of behavior” on sensitive subjects like nuclear weapons and cybersecurity — an echo of U.S. officials’ hopes of finding “guardrails” for the U.S.-Russian relationship.

“I think that we can find agreement on all this,” Putin said. “At least I got that sense given the results of our meeting with President Biden.”

Cyber experts expressed some skepticism, noting that Russia has often argued for cyber “conventions” that would give it greater control over the internet — and thus over its use by dissidents — while demanding absolute proof that Russian actors were involved in malicious activity.

Putin also left the door open to deeper engagement with Washington than the Kremlin had been willing to entertain in recent years. On issues beyond cybersecurity and nuclear weapons, including diplomatic spats and even prisoner exchanges, Putin said he was ready for talks with the United States, and he voiced unusual optimism about the possibility of achieving results.

“If you ignore the tiresome what-aboutism, there were some real outcomes,” said Samuel Charap, a senior political scientist at the RAND Corp. in Arlington, Virginia. “Russia is not in the habit of confessing its sins and seeking forgiveness. Particularly under Putin.”

The main outcomes in Charap’s view were the agreement on U.S.-Russian dialogue on strategic stability and cybersecurity, as well as the agreement for U.S. and Russian ambassadors to return to their posts in Moscow and Washington. Putin also said there was “potential for compromise” on the issue of several Americans imprisoned in Russia and Russians imprisoned in the United States.

To tout his renewed willingness to talk — while acknowledging the uncertainty ahead — Putin quoted from Russian literature.

“Leo Tolstoy once said: ‘There is no happiness in life — there are only glimmers of it,’” Putin said. “I think that in this situation, there can’t be any kind of family trust. But I think we’ve seen some glimmers.”