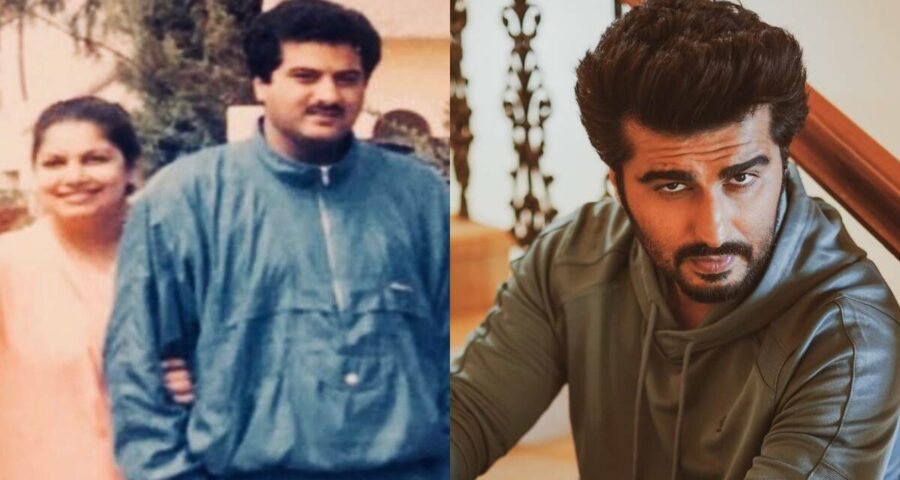 Arjun Kapoor opened up about taking to food and movies for comfort when his parents, Boney Kapoor and Mona, separated. He also talked about his weight loss journey. Actor Arjun Kapoor has often talked about his late mother Mona. During his appearance on Discovery+ celebrity cooking show, Star Vs Food, he opened up about taking to food for comfort when his parents, Boney Kapoor and Mona, separated. Besides food, what helped Kapoor to overcome the emotionally difficult phase of his life was movies.

“When I was going through a tough time emotionally, I used to escape to the movies and watch movies till late in the night. I sometimes watched 2 movies back to back and stay awake till 7-8 am watching films, even if that meant watching The Pursuit of Happiness and City of God in one night, watching the three Godfather films in one night or watching a lot of Korean cinema. I used to be mad about consuming material. When the whole house used to sleep, I watched movies,” Kapoor told indianexpress.com, adding that he developed the habit of watching movies at that time and is still mad about it.

It was at the same time that Kapoor put on weight due to his overindulgence in food. At the age of 16, he weighed almost 150 kgs and it took him a lot of effort to go from “P.H.A.T. (Pretty, hot and tempting) to fit.”

Sharing how he had to emotionally detach himself from food to shed those extra kilos, the Sandeep Aur Pinky Faraar actor said, “When you are 18-19, you have a certain amount of emotional attachment to food. So, for me that emotional detachment was necessary. I had to give up rice which I used to eat all the time. Like today, when there is more education around the kind of food you should and should not be eating, there was not this kind of intel 15 years back. I left sweets and rice, the two things I loved the most. So, it was difficult and emotional. But you have to make sacrifices to succeed.”

Though now he is mindful of what he eats, his family is the one that “looks forward to food all the time.” Describing the Kapoors obsession with food, Kapoor shared, “When we sit for lunch, we are talking about dinner, at dinner, we are talking about the next day; the restaurants we want to go to, most of our discussions are around food. Also, there is a certain threshold when it comes to the quality of the food, ‘khaana ek level ka toh hona hi chahiye varna mood kharab ho jaata hai’. There is always certain regard and respect given to the quality of food.”

Unlike his character of Kabir Bansal in R Balki’s Ki and Ka, Arjun Kapoor feels he is a reluctant chef who can make simpler food. But for him, Kabir Bansal is an ‘ideology’ which means “you don’t have to have ego to help at home or being a domesticated part of the partner.”

He feels one should “respect your partner, to allow her to flourish without making it seem like you are the only deciding factor. I think that is a decent start to being a Kabir Bansal. He is a cinematic way of looking at how you should let your partner be themselves and not be judgemental.”