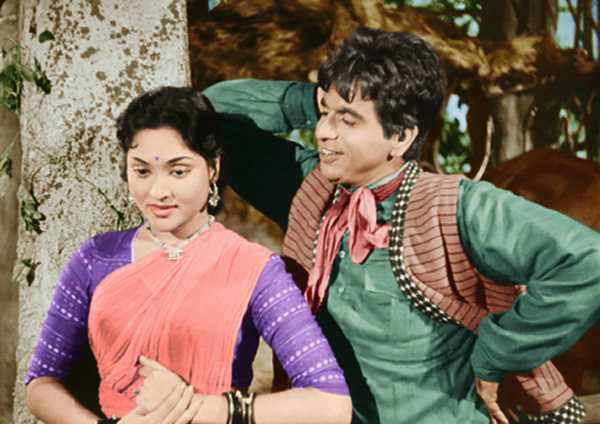 Dilip Kumar worked with several actresses in his career like Nalini Jaywant (whom he once told Subhash K Jha was his most challenging co-star), Nargis, Waheeda Rehman and Saira Banu. Subhash feels he was at his best with Vyjayantimala.

“It’s good of you to say that,” Vyjayantimala says from her home in Chennai.

“We did some good work together. Dilip Kumar was such a joy to work with. He always had something extra to contribute to every scene. His understanding of the film medium was unbelievable. I learnt a lot from working with him. Why only me? I think we all did. All the co-actors who had the privilege of working with him.”

The iconic actress laments the passing away of a co-star, who, according to her, epitomised the spirit of renaissance.

“He could hold forth on any topic with equal authority. I first got to work with him in Bimal Roy’s Devdas where I played Chandramukhi. Our pair was liked by the audience. I was then cast with him in B R Chopra’s Naya Daur. Madhubala was supposed to do the film with Dilip Kumar. I don’t know what happened, but I was offered the film. I loved my part, so I agreed.” Vyjayantimala, who worked in six films with Dilip Kumar, singles out Ganga Jumna as her favourite.

“It was a challenge. Here I was, this Tamil actress who could speak Hindi without any accent after much training and tutoring. In Ganga Jumna, I was expected to speak the Awadhi dialect, and that too without any accent.”

She received tremendous support from her co-star.

“Dilipsaab would record the dialogues on tape and send them to me to rehearse and prepare. When we shot for the film, the words just flowed effortlessly. I think our onscreen chemistry was always special, but in Ganga Jumna it was extra-special.”

The actress, now 84, continues to share a warm bonding with Saira Banu.

“Saira has always been fond of me. She calls me Akka, which is elder sister in Tamil. Whenever I visit Mumbai, she sends her car to the airport and I make sure to visit their residence. Saira always said that I shared the best screen chemistry with Dilipsaab.”

“I don’t know how to face her after this (Dilipsaab’s demise). She was such an exemplary wife, so unconditionally devoted to Dilipsaab. I must say he was very fortunate to have her.”

Vyjayantimala says she has the fondest memories of the time spent on sets with Dilip Kumar.

“We will do another film together up there soon,” she says.

Vyjayantimala, who stays in Chennai with her son Suchindra Bali, his wife and two daughters, hopes to visit Saira Banu soon. “This COVID situation has me confined to my home for the past one-and-a-half years. I have not stepped out at all. I do my dance practice at home.”