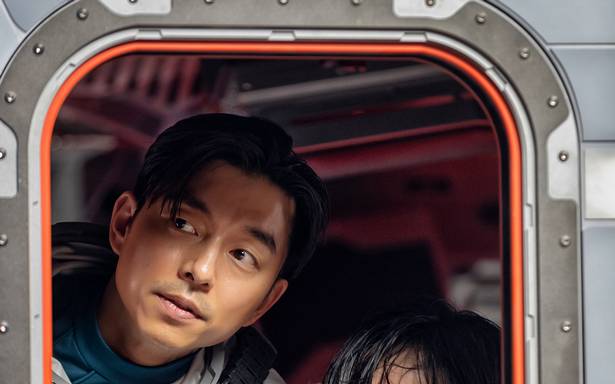 While the announcement of any project with actor Gong Yoo is met with excitement, this December is ‘Yooltide’ for fans as they eagerly await the release of the sci-fi thriller The Silent Sea, his third project this year after Seobok  and a cameo in Squid Game.

“I am extremely grateful for all the attention and anticipation for my work, but I will admit that sometimes it does put pressure on me,” he begins. “Honestly speaking, I tend to be someone who follows my own heart and is drawn to and chooses productions that resonate with me.”

Gong Yoo answers with humility to my observation that fans have been eagerly awaiting The Silent Sea. Adapted by director Choi Hang-Yong from his 2014 short film, The Sea of Tranquility, the show is set in a near-distant dystopian future. As the Earth’s water reserves dry up, a specialist team embarks on a dangerous mission to the Moon to retrieve samples from the Balhae Base station for the survival of humanity.

Bae Doona plays astrobiologist Song Ji An in the film. While she is no stranger to the world of sci-fi — she has headlined Wachowski projects such as Sense8, Jupiter Ascending and Cloud Atlas — the actor admits that she isn’t an expert in the genre. “Oddly, during the first decade since my debut, before Cloud Atlas, I was far from being a sci-fi expert; I was what you call a realism expert,” she laughs.

Although their personalities and ideologies clash in the thriller as they find themselves in space, both Bae Doona and Gong Yoo share an easy camaraderie off-screen. There is a sense of pride as they applaud the global popularity and mainstreaming of Korean content as it breaks international viewing records.

Would this translate as more Asian representation with an impact on the stories being told? Gong Yoo gives the answer some thought. “It is important to remember that there can be a bubble. In order that it is not temporary and a one-time wonder, but something that can be sustained, we must continue to create great stories from Korea. It’s a great time to be an actor.”

Read the full story | Gong Yoo: ‘Not a K-bubble’