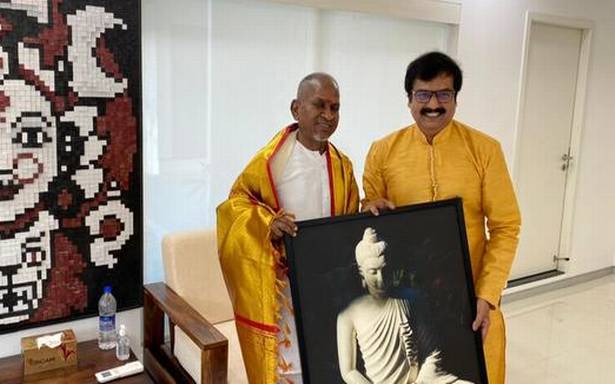 The lockdown last year made a lot of us return to our passions. For Tamil comedian Vivekh, away from the hectic activity on film sets, it was a time to revisit his love for music.

Everyone knows Vivekh the comedian, but not many know Vivekh the musician. He did not have any formal training in music, but having grown up listening to the tunes of MS Viswanathan and Ilaiyaraaja, developed a fine taste for it.

Last year, he rekindled that passion and regularly posted videos of him playing the piano in his house. He played the memorable Tamil track ‘Mannil Indha Kadhal’ (Keladi Kanmani) as a tribute to late singer SP Balasubrahmanyam when he was ailing. He also posted a video of him teaching his colleague-friend, ‘Cell’ Murugan, the ‘Unna Nenachu’ song from Ilaiyaraaja’s Psycho. “Music is my passion,” Vivekh told me during the promotional interviews of 2019 film Vellai Pookal, a crime-thriller in which he played a cop.

In between film shoots and his social welfare activities, Vivekh kept in touch with the musicians in the film industry to keep his passion alive. He had sent a message to composer D Imman just a few days back, enquiring about his ‘Kanna Kaattu Podhum’ song in Vijay Sethupathi-starrer Rekka. “He wanted to know which raga it was based on, and I explained to him that it had traces of both Gowri Manohari and Dharmavathi,” Imman told The Hindu. “He praised me for trying out many raga-based songs in films. What’s most shocking was this happened just four days ago. It tells us how life is so fragile,” the composer added.

Imman might be a big name in Tamil cinema today — he recently won a National Award for his music in Ajith’s Viswasam — but back when he was in Class VIII, it was Vivek who had words of positivity for his mushrooming musical talent. “He (Vivekh) adjudged a cultural competition in my school Don Bosco, and gave me a special mention. He said that I played like a connoisseur and had a great future ahead,” recalled Imman.

Vivekh enjoyed a warm camaraderie with several music composers in the industry. He has interviewed Oscar winner AR Rahman a few times for TV channels and spoken extensively about life and music. Vivekh even played ‘Ottakatha Kathiko’ (Gentleman) in front of Rahman, who in turn jokingly told him, “Wow super… shall I leave sir?”

Like many other Tamilians, Vivekh learnt the intricacies of music by hearing Ilaiyaraaja’s songs. The comedian idolised the Isaignani; the first song he played on his personal keyboard was a Ilaiyaraaja song from Annakili. Even last month, he visited Ilaiyaraaja during the inauguration of his new studio and spent some time discussing music. “It was indeed a magical moment,” Vivekh later tweeted about that interaction.

The comedian was always encouraging of new talent and went out of his way to pat the back of younger composers like Anirudh. Even before the composer’s viral ‘Kolaveri’ from Dhanush-starrer Moonu (2012) released, Vivekh called him. “I got his number from my daughter, who studied in the same school, and told him it would become a superhit,” Vivekh recalled at a function. The comedy fraternity will miss him greatly, but the Tamil music industry has also lost a well-wisher, piano player and most importantly, a lover of music.