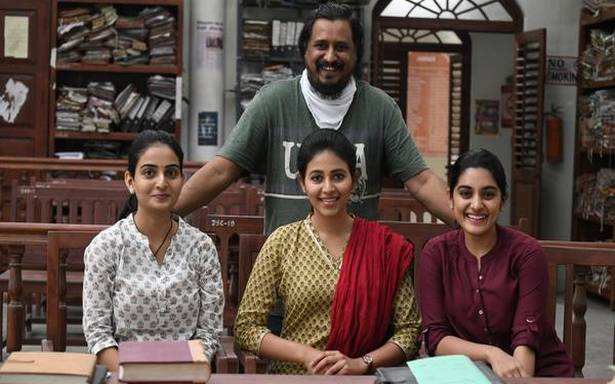 Director Sriram Venu talks about balancing the star power of Pawan Kalyan with the core idea of ‘Pink’, in the Telugu remake ‘Vakeel Saab’

Director Sriram Venu is aware of the dual responsibilities on his shoulders — to deliver a film that will keep the massive fan base of Pawan Kalyan happy, given that the actor is returning to the screen after three years, and to stay true to the core idea of the Hindi film Pink (2016), which Vakeel Saab is a remake of. Taking time out for this interview amid overseeing the final leg of post-production for Vakeel Saab, which is scheduled to release in theatres on April 9, he says he has strived to his best to see that the content of Pink reaches the nooks and corners of the two Telugu States.

The fact that the Amitabh Bachchan starrer Pink and its Tamil remake Nerkonda Paarvai starring Ajith Kumar have been widely viewed both in theatres and on digital platforms doesn’t bother Sriram. He reasons, “India is a country where the language and ethos change every 100 kilometres. As someone who has grown up watching Telugu movies, I’m aware of the need to reinterpret and narrate the story, appropriating it to the regional milieu.”

The presence of an A-list star might help take the ‘No means no’ statement of Pink reach far and wide, but Sriram says that during the writing process, he was conscious of the fact that there are two sides to a coin: “Pawan Kalyan can take this film to the masses, but the star presence comes with baggage. I’ve tried to strike a balance between catering to the star power as well as what the story has to convey, without being preachy. A film like this might be watched by an IAS officer, those from the middle class as well as a daily wage worker. The film has to appeal to everyone.”

Reflecting on his debut directorial venture Oh My Friend (2011) starring Siddharth, Shruti Haasan, Hansika Motwani and Navdeep, Sriram says he had focused more on the intent of the story than on the entertainment quotient and hence, the film didn’t fare well at the box office: “Years later people tell me that they liked the film. I wish they had watched it in theatres,” he laughs.

Oh My Friend turning out to be a box office turkey posed a problem, with his subsequent project not taking off. It took Middle Class Abbayi (2017) starring Nani, Sai Pallavi and Bhumika Chawla for Sriram to prove that he could make a commercially viable film.

Sriram shares that he grew up watching mainstream films and loved spending time in cinema halls. “If I wasn’t a filmmaker and had enough money, I’d spend all my time watching movies.” He later got introduced to world cinema thanks to the Hyderabad Film Club and at one point, considered enrolling in the Film and Television Institute of India, Pune. But eventually, he took up ad films and documentaries and made inroads into Telugu cinema.

The brief interest in world cinema, he says, had him at the crossroads, making him wonder if he should be making films for the sake of art or take the mainstream route. With time, he realised that it helps to walk the middle path.

Reverting to talk about Vakeel Saab, he shares that the team had managed to shoot 70% before lockdown, as the project was originally scheduled to release in May 2020.

Nivetha Thomas, Anjali and Ananya Nagalla reprise the parts played by Taapsee Pannu, Kriti Kulhari and Andrea Tariang in the Hindi original. “The three women hail from different backgrounds. Nivetha fits the part of a confident urban woman of today. Anjali’s part required an experienced female actor who could convey the emotional trauma, and I chose Ananya after watching her debut film Mallesham. She plays a naive, innocent girl who is relatively new to the city.”

Though Sriram is reluctant to reveal much about Pawan Kalyan’s characterisation, he hints, “He is a lawyer with a star appeal and we show what makes him stand out. I’m waiting to see how people receive this film.”