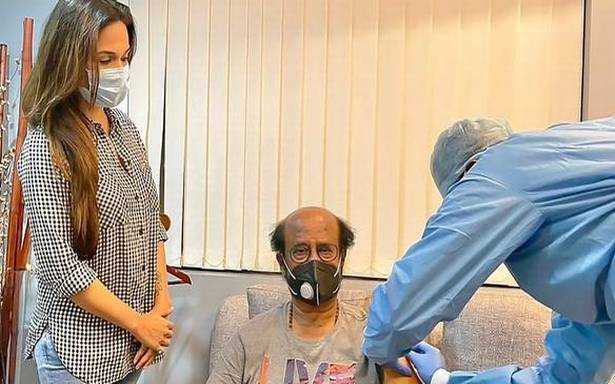 The actor had returned to Chennai yesterday, after finishing a month-long schedule for his next film ‘Annaatthe’ in Hyderabad

Superstar Rajinikanth received his second dose of the COVID-19 vaccine at a private hospital in Chennai on Thursday.

His daughter, Soundarya Rajinikanth took to Twitter to share a photo of her father completing the vaccination process.

The actor had returned to Chennai only yesterday, after finishing a month-long schedule for his next film Annaatthe at Ramoji Film City in Hyderabad.

Rajinikanth has finally finished shooting for Annaatthe, with plans to release the film in theatres later this year after the pandemic is over. The shooting of the film was earlier put on hold after crew members on the set tested positive for COVID-19 in December.

Following that, the actor announced that he will not be starting a political party and entering the electoral fray as his health condition does not permit him to engage in full-scale political activity in the midst of the COVID-19 pandemic.

Directed by Siva, Annaatthe is speculated to be a rural family entertainer starring Rajinikanth, Nayanthara, Meena, Khushbu, Prakash Raj and Soori in important roles. The film is produced by Sun Pictures, and has music composed by Anirudh Ravichander.