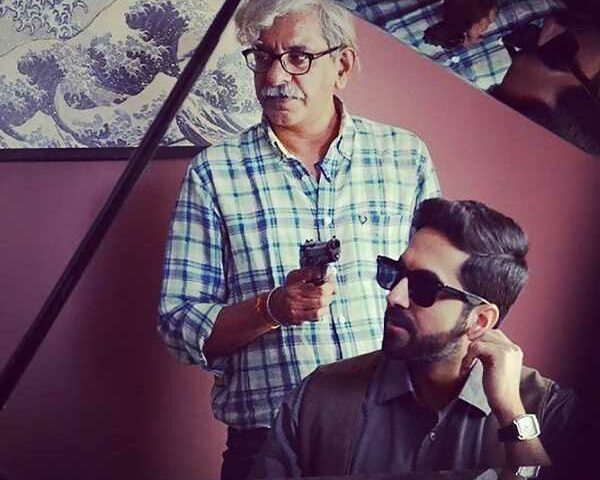 ‘I narrated the story to many top actors, but for some reason, they couldn’t connect with the character of a blind pianist.’

It’s been three years since Sriram Raghavan gave us the brilliant Andhadhun, starring Ayushmann Khurrana, Tabu and Radhika Apte. The film has since spawned remakes in Tamil, Telugu and Malayalam.

Prithiviraj’s Malayalam remake of the film, Bhramam, has just released on OTT.

Sriram looks back at the film and tells Subhash K Jha, “Viewers embraced the ambiguous ending and I am still asked about it.”

Did you ever think Andhadhun would become such a cult film?

Obviously, we had no idea that Andhadhun would receive so much love from audiences.

Viewers embraced the ambiguous ending and I am still asked about it.

To what do you attribute its abiding success?

It’s difficult for me to give reasons.

I think it’s a whole lot of creative and positive energies coming together.

We had a wonderful cast, and a terrific team…. the making of the film was a lot of fun, and luckily, that translated on screen. Tell me about the genesis of Andhadhun.

The genesis is a wonderful 11-minute French short film, Le Accordeur, made a decade back. It’s available on YouTube.

A colleague from Bengaluru named Hemanth Rao sent me the link to the film.

I watched it one late night and totally loved the situation.

Then I wondered what else could happen in the scenario.

I told Hemanth that we should try and expand it.

We started exchanging e-mails about how we could take the story forward.

We developed the first act and a little more and then got stuck.

It was after Badlapur that I started working on the story again.

I got more collaborators, including my Badlapur co-writer Arijit Biswas, my editor Pooja (Ladha Surti) and Yogesh Chandekar, who had worked with us on the Agent Vinod graphic novel.

We brainstormed and wrote various versions and finally arrived at the script of the film that you see. I believe you were initially going to cast Harshvardhan Kapoor. How did Ayushmann Khurrana come into the picture?

I narrated the story to many top actors, but for some reason, they couldn’t connect with the character of a blind pianist.

Maybe because he is not a hero. There’s nothing heroic about him.

Then I thought it’s better to look for a newcomer with no baggage.

Also, I wanted an actor who would devote time and learn the piano…that was a must.

I met Harshvardhan, but he was busy with Vikramaditya Motwane’s film and would get free much later.

I was getting impatient and I still had no actor.

Then I got a text from Ayushmann. We met.

He loved the story. He was a musician and willing to train on the piano.

I’d been blind not to have seen him earlier.

Where do you place Andhadhun in your own repertoire? Do you rate it higher than Ek Hasina Thi and Johnny Gaddaar?

I feel a bit silly to rate my own films.

After Badlapur, I wanted to do something more fun and in that sense, I’m happy we managed to crack this mad story. Now there is Bhramam, a Malayalam version of Andhadhun. Earlier, there was a Tamil and a Telugu version. What do feel about these spin-offs?

Three remakes is flattering, of course.

It’s a tough film to remake because one cannot change much in the story.

I’ve been busy, but will watch them soon.

Tell us about your forthcoming projects.

I am presently prepping for two films.

One is Ikkis, the Arun Khetarpal story, and the other is Merry Christmas, which is a one-night story.

Any chances of a sequel to Andhadhun?

At present, there are no plans. Kuch cheezen adhuri hi achi lagti hain (some things are better left unfinished)