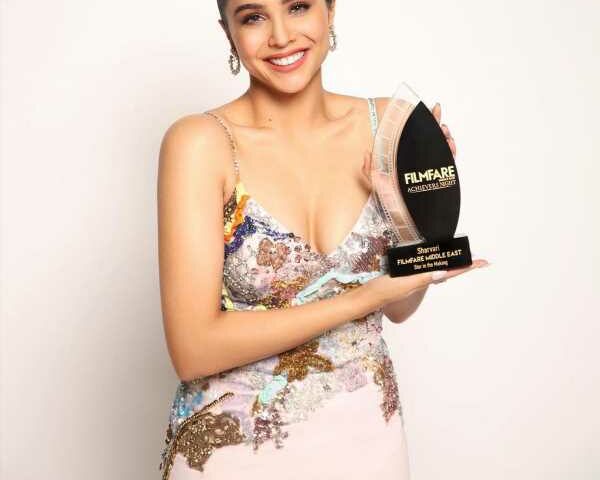 Bollywood stars spent the weekend in Dubai as they attended the Filmfare Middle East Achievers Night 2022 on Saturday.

Sharvari won the Star In The Making award and writes: ‘They say, ‘Firsts are always special..’ and indeed what a beautiful and gratifying year this has been!! Tonight’s been special for simply two reasons — I celebrate one year of my debut with #BuntyAurBabli2 and here it is, reiterating my love and passion for movies … This beautiful @filmfareme trophy! Thank you so much for honouring me with the title of ‘Star In The Making’ Truly grateful!’ 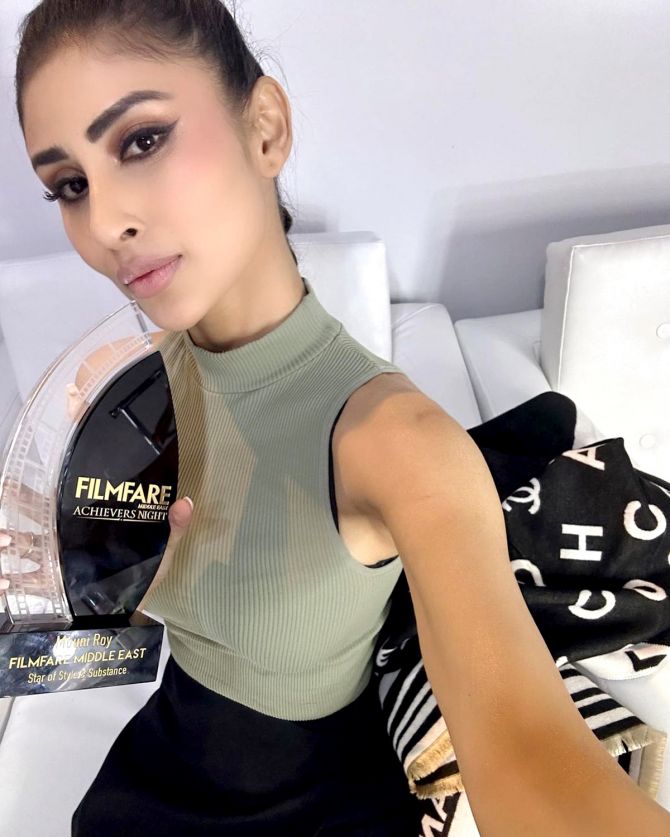 Mouni Roy shows off her Star of Style & Substance award and writes, ‘Humbled and thankful for the honour, the love & the beautiful memories @filmfareme Such fun performing on stage last night. Thank you.’ 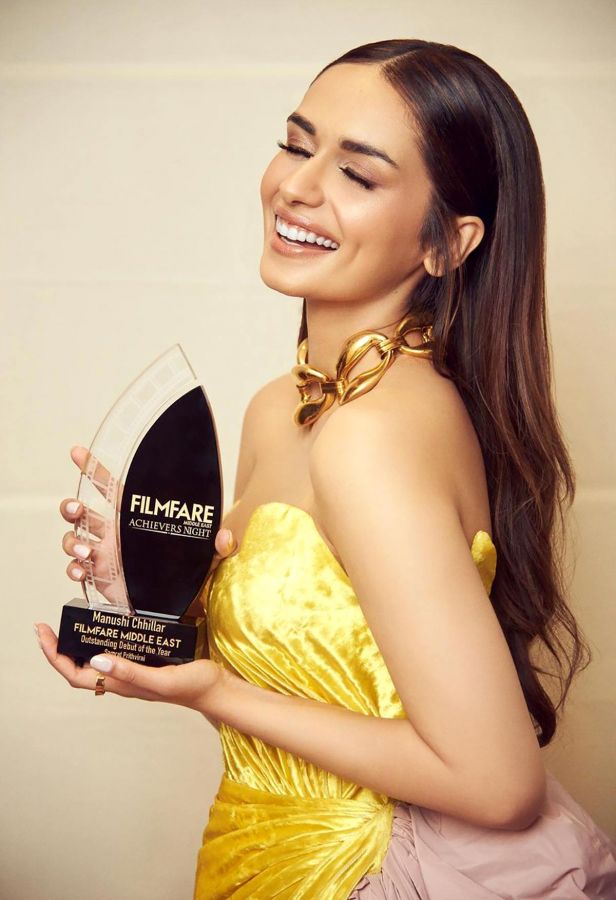 Manushi Chhillar holds the Outstanding Debut of the Year award for her film Samrat Prithviraj close and tells us, ‘Debut films are special but winning awards for your debut film is an even more special feeling! Thank you @filmfareme for validating my effort as an actor in #SamratPrithviraj and for honouring me with the ‘Outstanding Debut of the Year’ award! Promise to work harder in every film that I do and try and win all the love that I can get from here on…’ 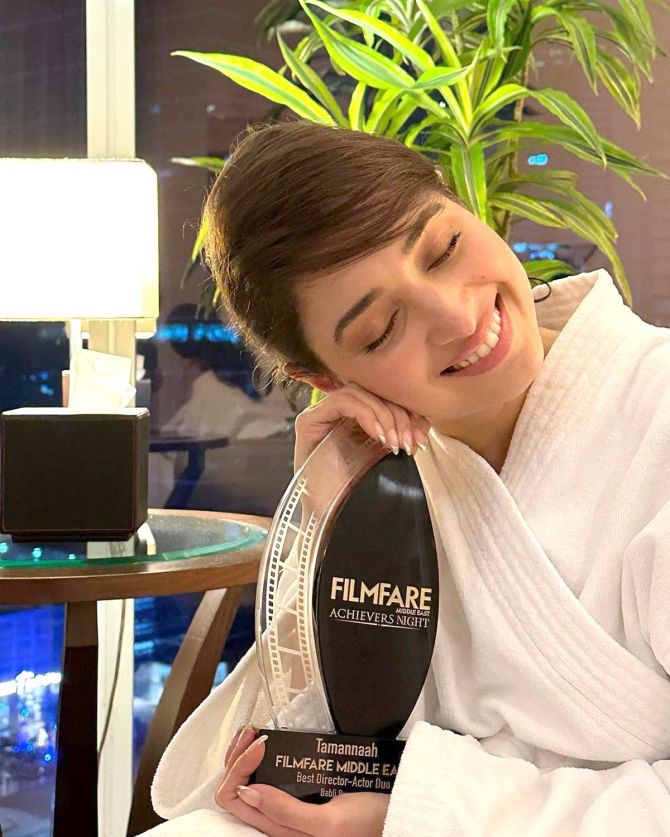 Tamannaah Bhatia wins the Best Director-Actor Duo award for Babli Bouncer: ‘Someone’s gonna get a good sleep tonight. Heartfelt thanks to @rizwan.sajan for bestowing us with this honour . Couldn’t have done this without you @imbhandarkar your faith in me has really given me one of the best experiences I have had on a film set to create a character I will never forget . A big thank you to the entire team of @dcatalent and @rajeevmasand for helping me fulfill my thirst as an actor Team work makes dreams work.’ Ranveer Singh is on a winning spree!

His latest award is the Superstar of the Decade and he writes, ‘Thank you Filmfare Middle East for deeming my cinematic journey to be a glorious one. Honoured to receive this award in the presence of my parents & my screen idols.’ 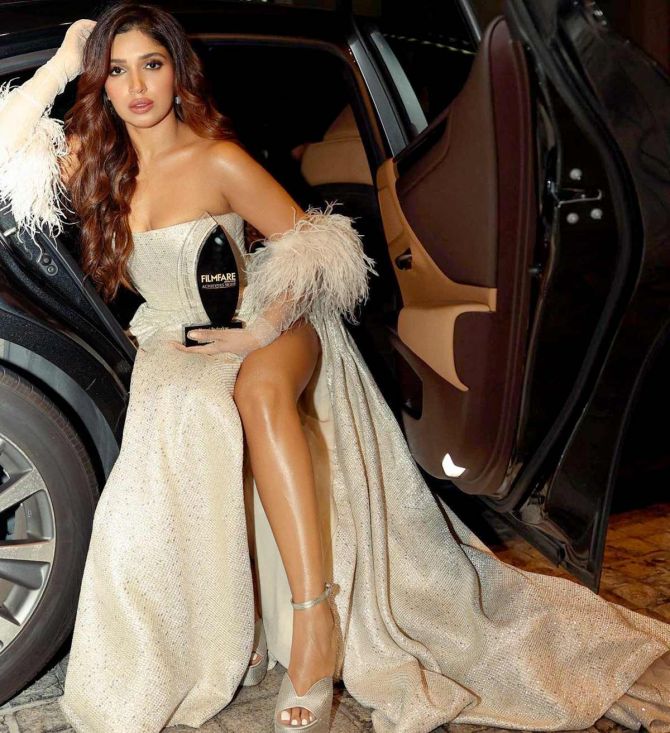 Bhumi Pednekar wins the Mould Breaker of the Year award for Badhaai Do and notes, ‘#BadhaaiDo is a film that keeps on giving! Thank you @filmfareme for honouring my performance in this sensitive and very important film and bestowing me with the ‘Mould Breaker of the Year’ award! I poured my heart into the film and my character and I’m humbled that it has resonated with so many people globally!’ 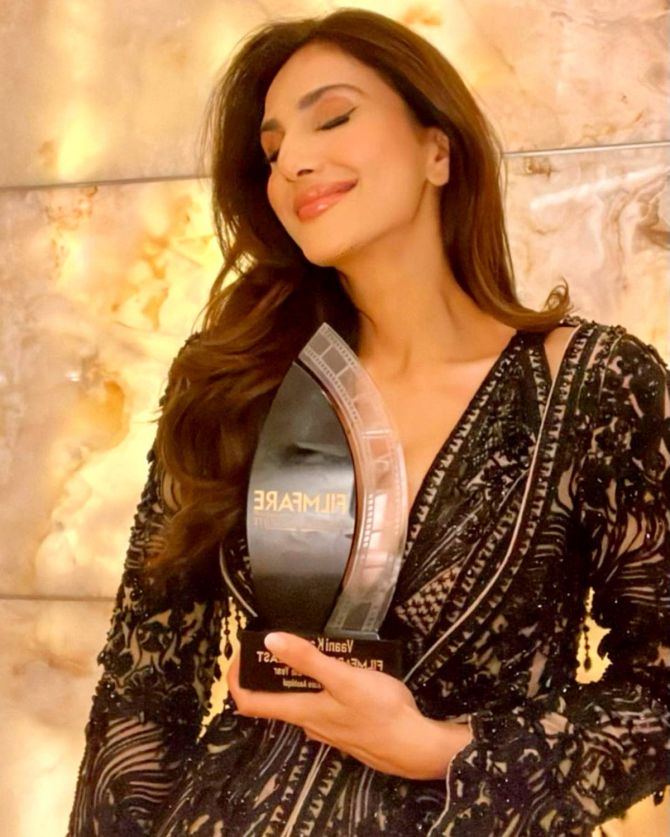 Vaani Kapoor, who made everyone take note of her in Chandigarh Kare Aashiqui, wins the Game Changer of the Year award: ‘The immense love and acceptance I’ve received for this film and my part has been beyond the realm of any societal conditioning. Im extremely grateful to @filmfareme for recognizing and honoring our film with utmost respect and love.

‘@gattukapoor None of this would’ve been possible without your faith and conviction in me. @ayushmannk thank you for being the best Manu to Maanvi .. couldn’t have done it without your support and brilliance as an actor. @pragya and @tseries.official thank you for making this experience a smooth sail’ 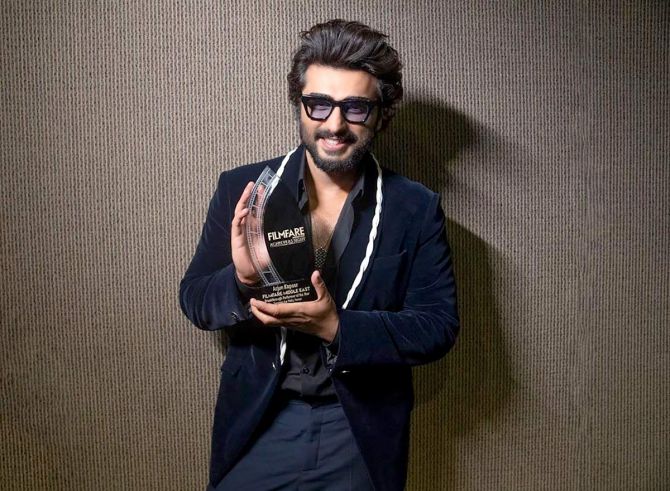 Arjun Kapoor says, ‘This one’s really special! Proud to receive the ‘Breakthrough Performer of the Year’ award from @filmfareme for my acting in #SandeepAurPinkyFaraar!! Thank you Dibakar Banerjee for your belief in me as an actor and mentoring me to deliver a performance that is my career best so far! Thank you @parineetichopra for being an awesome co-star as always and the entire team of #SandeepAurPinkyFaraar. I dedicate this award to you mom for always believing that I should always dream with my eyes open! Love you and miss.’ 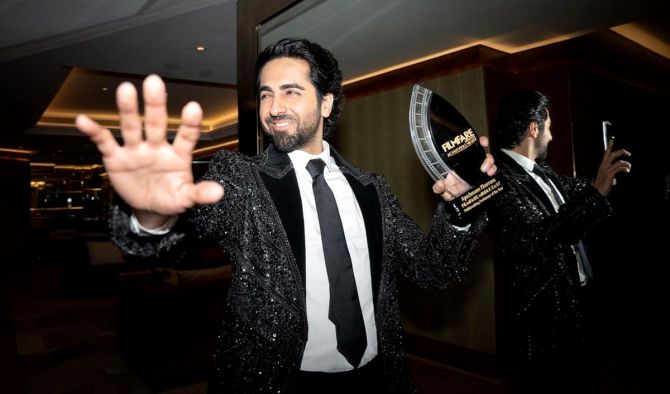 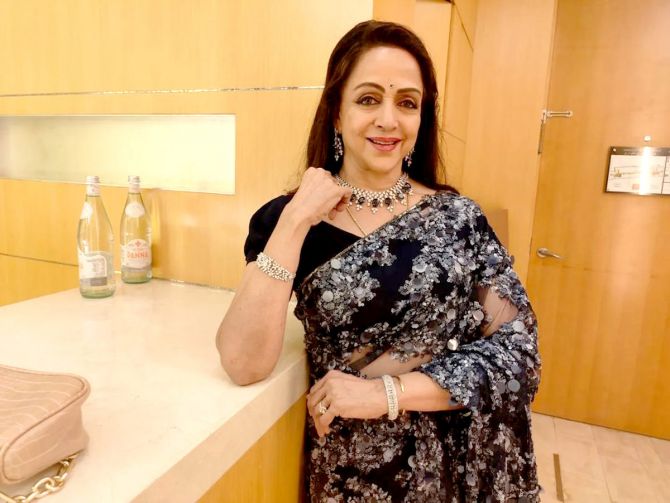 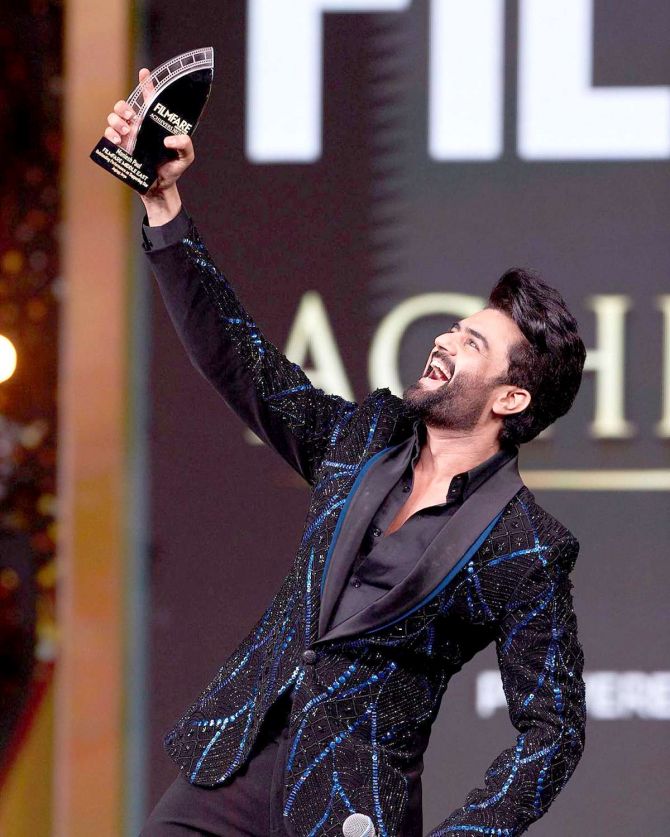 Maniesh Paul is ecstatic after receiving an award for JugJugg Jeeyo: ‘O IT HAPPENED LAST NITE!! I won the FILMFARE MIDDLE EAST BEST SUPPORTING ACTOR for JUG JUGG JEEYO!! Thanks to all the fans for loving GURPREET! Thank you @rizwan.sajan @filmfareme for the honour Thanks @karanjohar @apoorva1972 @raj_a_mehta @dharmamovies for making me see this day.’ 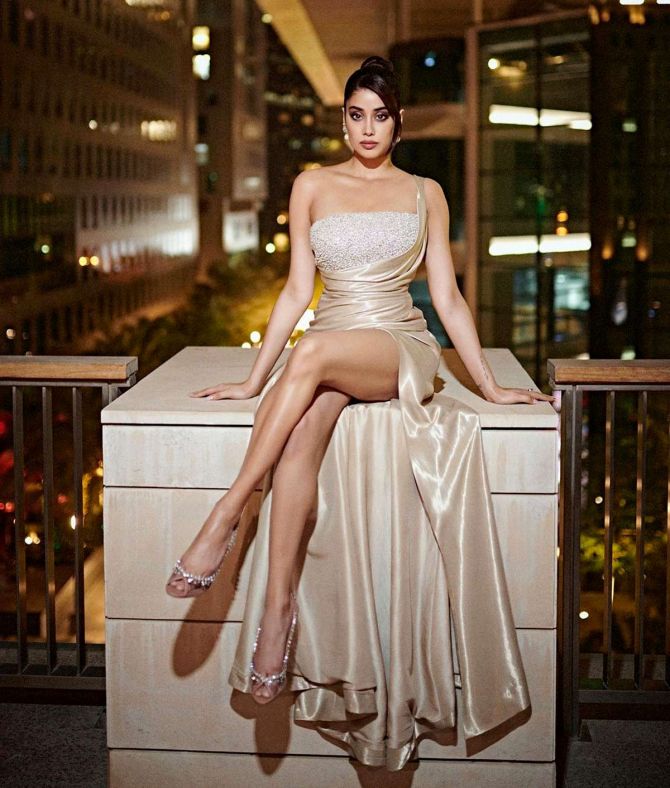 Janhvi Kapoor performed at the awards night and says, ‘Thank you for such a fun night Dubai!’ Nargis Fakhri made memories at the event too. The day after the awards, Karan Kundrra took Tejasswi Prakash out on a date! 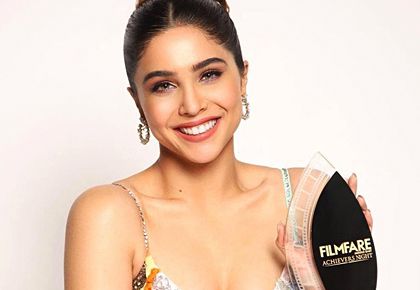