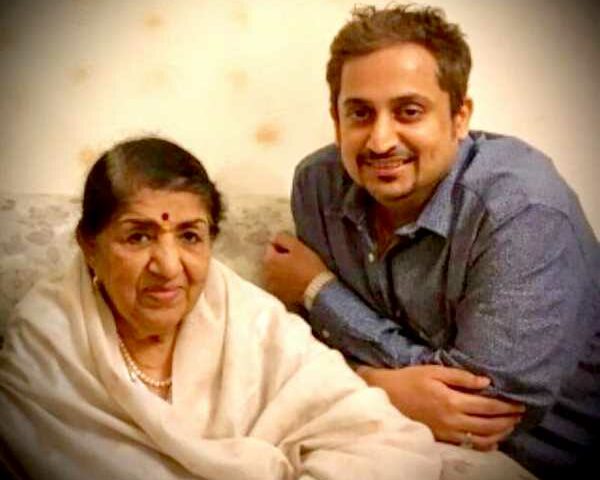 ‘While we conversed in Marathi, she would always make it a point to ask me in English, “Are you okay? Have you eaten?”‘
‘I sorely miss that care and concern.’

Among the millions who deeply felt Lata Mangeshkar’s loss when she passed away on February 6 was her nephew, brother Hridaynath Mangeshkar’s singer-composer son Baiju Mangeshkar.

As he comes to terms with the irreplaceable loss, he narrates some beautiful instances from Lataji‘s life that very few know about.

He especially remembers the way she would spend her birthdays on September 28, and tells Rediff.com Senior Contributor Roshmila Bhattacharya, “Her birthdays in the ’70s, ’80s, till the late ’90s, was always spent away from home. Aunty would check into the Taj Mahal hotel in Mumbai on September 26 or 27 and stay in a suite for three nights. In hindsight, I realise that this was her way of keeping herself detached and grounded.”

One of my earliest memories associated with Lata (Mangeshkar) aunty is that of a Paddington Bear.

In fact, I have been thinking of this much-loved stuffed toy since Queen Elizabeth II passed away because she had made it famous worldwide.

Aunty would make trunk calls to the family back home when she would go on trips and vacations abroad.

Once she was in London then and, as usual, when she called, we all stood in queue, waiting to speak to her.

When it was my turn, she asked me what I wanted.

I was all of five years old and asked for a teddy bear.

She got me the Paddington Bear which was my size, with his own cap, jacket and Wellington boots which I could have worn.

I had the bear, battered from frequent hugs, one button eye gone, till 2001-2002 when during renovation, it was lost.

Aunty was pretty strict with us kids, but she also pampered us, getting us loads of toys. On one occasion, she brought an entire suitcase from which toys spilled out. I was fascinated by her room which was always dark because the windows had stained blue glass panes that fractured the rays that filtered through, muting the sunlight.

It was also smoky from the incense sticks she lit when doing puja.

From this haze, would rise a mythical figure with long, Rapunzel-like tresses.

It was almost like a scene from a movie.

When you are just three or four, you don’t understand the meaning of star or legend, but I could feel the almost spiritual aura around Aunty, which was more than just being the eldest in the family.

It set her apart from the others.

‘For us, there were birthday cards with handwritten messages’

She had a photographic memory, and remembered birthdays and anniversaries of not just family, but friends and colleagues too.

She would call and wish, send thoughtful notes, flowers and gifts.

For us, there were birthday cards with handwritten, age-appropriate messages, which would change from year to year, as did the visuals.

When I was young, they came with pictures of cakes and cartoon characters like Mickey Mouse.

As I grew older and grew interested in art, Aunty picked out cards showcasing the works of Claude Monet and Edgar Degas, French Impressionist painters I enjoyed, and other artists she thought I might like.

The accompanying messages were sweet, succinct and sometimes cryptic.

They came with her blessings and always ended with ‘Only yours, Didi’.

I still have all the cards and will always treasure them.

There were gifts too, carefully chosen with likes and dislikes in mind.

But as I grew older and my preferences became strongly defined, knowing how finicky I was, a trait I had inherited from her, Aunty would give me money in an envelope to buy what I wanted.

She would laugh, saying, ‘Baiju, he either loves something or he hates it.’

‘I had the privilege of not just composing for her, but also singing with her’ Aunty was fondly indulgent towards me because we had a lot in common, including our passion for music.

She always said she would like to do something for me, but I also think that she was proud and appreciative of the fact that I didn’t want to piggyback on her name and success.

That made our collaboration special and I had the privilege of not just composing for her but also singing with her.

The lyricist, a 15th century Sufi sant, Hazrat Shah Hussain, was more popular up North. While she knew of his poetry, she still wanted to know more and even asked how to pronounce certain words.

When it was work, she had no ego.

If she didn’t know something, she admitted it without trying to wing it with an I-know-it-all attitude.

In a professional capacity, Lata Aunty was not just respectful towards her elders, she also treated contemporaries and her juniors with the same respect.

She was a student all her life, always receptive to knowledge.

You could have a healthy discussion with her knowing she would quietly listen to your point of view before giving her opinion.

She was growing every day, which is the sign of a genius.

Which are my favourite Lata Mangeshkar songs?

It’s hard to pick because I’m a die-hard fan. There are too many gems that I was blessed to hear live when I accompanied her to concerts.

One of my early favourites were the Meera bhajans composed by my father (Hridaynath Mangeshkar) for Lata Aunty.

I heard them first when I was around three-and-a-half years old and till I was five, I would go to V Shantaram’s home and his eldest daughter-in-law would play the LP record for me on their system in their huge drawing room.

I didn’t understand the words, but Aunty’s voice was so pure that I would fall asleep listening to them and take my afternoon nap there.

Down the decades, from the ’50s and ’60s to the ’70s and ’80s, there have been so many songs, from Madan Mohan’s Lag Jaa Gale and Zara So Aahat Hoti Hai to Jaidev’s Allah Tero Naam and Raat Bhi Hai Kuch Bheegi Bheegi.

They should never be touched because no singer can reach that height of perfection and sublimity ever.

She could create magic in any language and any genre.

‘She gave me her closely-guarded sheera recipe on the phone’

We also shared a passion for food.

Like me, Lata Aunty not only enjoyed eating, but cooking too.

She relished my pan-fried chicken, chicken in mushroom cream sauce and a diet version of Kentucky fried chicken.

She herself excelled in khandani Lucknavi cuisine which she had learnt from Majrooh Sultanpuri’s wife.

She made Zaffran Chicken Pasanda, which you don’t get even in restaurants, and Dhania Gosht.

Aunty had also lived in various places in Maharashtra, including Kolhapur, and had picked up recipes along the way.

She made amazing Gajar Halwa and Sooji Halwa or Sheera as we Maharashtrians call it.

She would make it for us, especially when we were in London.

She made her own ghee and refused to use the store-bought variety.

Once when I was away in London doing workshops, I missed her sheera so much that I called to ask Aunty how she made it.

She was very guarded with her recipes, but made an exception and instructed me on the phone.

It turned out well and whenever I made it, Aunty would laughingly remind me that she had taught me how to make sheera.

In later years, I was put in charge of organising her birthday dinner.

I would order a special cake or biryani… once I baked the cake myself.

On another occasion, I got Patrani Machchi (a steamed fish Parsi delicacy), which she loved, especially made for her on September 28.

‘Earlier, before her birthday, she would check into the Taj for three days’ Aunty would check into the Taj Mahal hotel in Mumbai on September 26 or 27 and stay in a suite for three nights.

On her birthday, we would join her in her room.

It was a fun day. We kids would go swimming, frolic around and return to dine with mostly family and a few select friends whom she interacted with daily, like Majrooh Sultanpuri and Pandit Naresh Sharma.

Aunty would have her lemon tart.

In hindsight, I realise that this was her way of keeping herself detached and grounded.

Back then, she was at her prime, and being wooed by everyone.

The house would be filled with flowers, right from the lobby.

But she never saw them because by the time she returned home, my aunt would have sent the bouquets to hospitals to cheer up patients.

Being wise beyond her years, Aunty knew that the flowers would get fewer as she grew older and wanted to spare herself the hurt.

Fortunately, in her case, they never completely stopped.

From 2000, she started spending her birthday at home.

She would take calls, chat on the phone, give interviews to the media.

But dinner was always a private affair with family.

‘How was I to know that would be my last gift to Aunty?’

I would get her gifts on her birthday which got more expensive when I could afford them.

Last year, when Aunty was confined to the bedroom, put on a strict regime where even her intake of liquids was regulated, I bought her a cutlery set and a beautiful, made-in-India glass with markings.

They were modest, frugal gift, but she insisted the love and thought behind them made them special.

I told her I had still to present her with her real gift and presented it with a flourish.

It left her teary-eyed!

It was one of her life’s biggest regrets that she could not sing with her idol, K L Saigal, because of his untimely demise.

After I played the song for her, Aunty put a hand to her chest and said, ‘This is the best gift I have ever received.’

Even her nurse, a girl in her early twenties, who would come out of her bedroom often, laughing after listening to yet another story of my childish pranks from my aunt, was overwhelmed.

She told me later, ‘Dada, I pray to God that the love and happiness I see in this family always remains.’

How was I to know that would be my last gift to Aunty?

This year, her birthday will be a sombre occasion for me, a quiet celebration of her life and my time with her.

Like so many others, I have been beguiled by her all my life.

She was a father-figure, an epitome of perfection in her dedication to art, whom I aspired to be like in the way she handled her life and relationships.

She had so much intelligence and soul.

Like me, she would get rattled if things didn’t turn out right, but then, she set them right with calm composure.

Even when things got difficult, she would spring back quickly.

The last two years were very difficult, but she never complained.

She was happy and content to relive her journey through memories with those around her.

I had her photographic memory and when I remembered certain songs, she would narrate behind the scenes stories behind them.

Today, those conversations are priceless memories.

The only thing that upset her was if one of her loved ones fell ill.

Then the lioness became a vulnerable lamb.

These seven months without her have been hard. I feel her loss acutely because there can never be anyone like her.

But I also sense her presence.

Her family was her world and she was our world.

While we conversed in Marathi, she would always make it a point to ask me in English, ‘Are you okay? Have you eaten?’

I sorely miss that care and concern.

We all do, it’s our biggest loss.