Despite consumer inflation, joblessness, etc, ordinary voters still think Modi is the best to rule the country.
Going into the poll with a tried and tested prime ministerial candidate is a huge plus for the BJP — and a huge handicap for the Opposition, points out Virendra Kapoor.

With normalcy fast returning after the two-year disruption caused by the pandemic, national politics seems to be warming up for the next parliamentary poll in 2024.

It may be early days yet, but both sides do not want to take any chances and can be seen preparing the ground already for the next big battle.

The flurry of activity in the Opposition camp demonstrated that it is conscious of the truth in the adage united we stand divided we fall.

With that end in view, Nitish Kumar recently undertook a whirlwind tour of the capital, meeting a number of Opposition leaders with the objective of forming a joint front against BJP.

Whether he met any success is unclear, but having left the BJP for the second time, and teaming up with Laloo Prasad’s RJD to continue as chief minister, Nitish believed he had the stature and political nous to bring the disparate groups together on one platform.

A difficult task, no doubt, but no harm in trying. For the record, he denied for the nth time any ambition to lead the proposed joint front.

Yet, simple caste arithmetic would suggest that even without a formal creation of a third front, an understanding among parties to avoid splitting their votes in is as many constituencies as possible could make things difficult for the BJP.

The point is straightforward. By ensuring a one-to-one fight the Opposition can deny Modi a third successive five-year term as prime minister.

But is it do-able, especially given the clashing ambitions, egos and interests of various Opposition players?

Ideology may have long vanished from Indian politics, but personal ambitions are still difficult to put aside even for defeating Modi. Admittedly, both in Maharashtra and Bihar if the current political equations remain undisturbed the BJP could find it hard to repeat its 2019 success.

The BJP and the Shiv Sena together had bagged 41 of the 48 States.

The Sena, which won 20 seats, is now with the NCP and the Congress whereas the BJP now partners the rebel Sena group.

How this will pan out, whether the current arrangement will survive till the poll in 2024 is hard to guess.

Likewise in Bihar, where BJP had won 17 of the 40 seats, might be in trouble with the Janata Dal-United-Rashtriya Janata Dal joining hands.

Ditto in Jharkhand which too has an omnibus anti-BJP alliance in power now.

In short, the aggregation of the Opposition vote can pose a headache for the BJP in Maharashtra, Bihar, Jharkhand and even West Bengal where it had surprised itself by winning 18 of the total 42 seats.

But one factor which can cancel out the aggregation advantage the Opposition craves for by pooling anti-BJP vote is the magnetic pull of Modi.

A number of opinion polls have revealed how no Opposition leader comes close to him in popularity.

To put it bluntly, without Modi the BJP might shrink to its normal 70-80 seats won in multi-party contests from the Hindi heartland. With Modi, its tally crosses the half-way mark.

Going into the poll with a tried and tested prime ministerial candidate is a huge plus for the BJP — and a huge handicap for the Opposition.

True, in 2004 when the Vajpayee-led BJP was defeated the Opposition did not have a prime ministerial candidate.

But in 2004 people had voted against the Vajpayee government, rather than elected Manmohan Singh, who was nominated the head of a hurriedly cobbled together United Progressive Alliance post-poll. 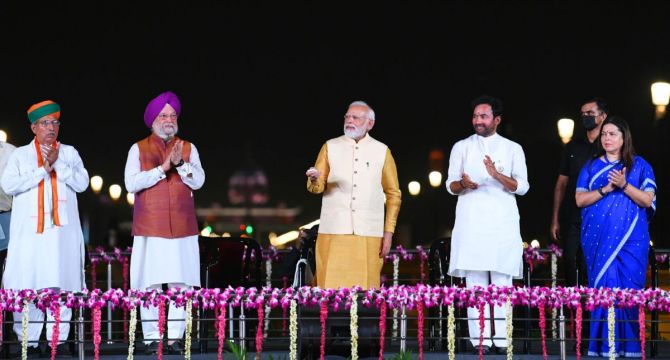 The political landscape is vastly different now from the one in 2004.

For one, Modi’s popularity far exceeds that of Vajpayee. Modi has expanded the BJP’s footprint to a much larger electoral space.

Besides, Modi has turned the cadre-based BJP virtually into a mass party drawing support from castes and sections hitherto indifferent to the saffron party.

In West Bengal, Mamata Banerjee has vowed to defeat Modi by joining hands with Nitish Kumar, Hemant Soren, the Jharkhand chief minister, Akhilesh Yadav, the Samajwadi Party leader in UP.

But she made no mention of Rahul Gandhi or the Congress party.

In the same public meeting, Mamata lambasted the Modi government for unleashing various investigating agencies against her party men.

Indeed, there is a feeling that if all else fails to unite the Opposition, the unending raids, searches and arrests by the ED, CBI, Income Tax et al, might to do so.

Even the prime minister seemed to be alive to the danger, commenting how the ‘corrupt leaders are coming together to save their ill-gotten loot.’

Given that corruption is the common denominator in politics, vulnerable Opposition leaders can be expected to put aside their differences to try and protect themselves from the investigating agencies.

This is a powerful motive for Opposition unity.

Meanwhile, the BJP has become hyper-active in renewing its connect with the people.

The launch of the aircraft carrier, Vikrant, opening of the newly-made Central Vista project, erection of the Bose statue at India Gate, etc., were well-timed, these can only add luster to the Modi persona.

Aside from formally sounding the bugle, poll preparations have already begun. 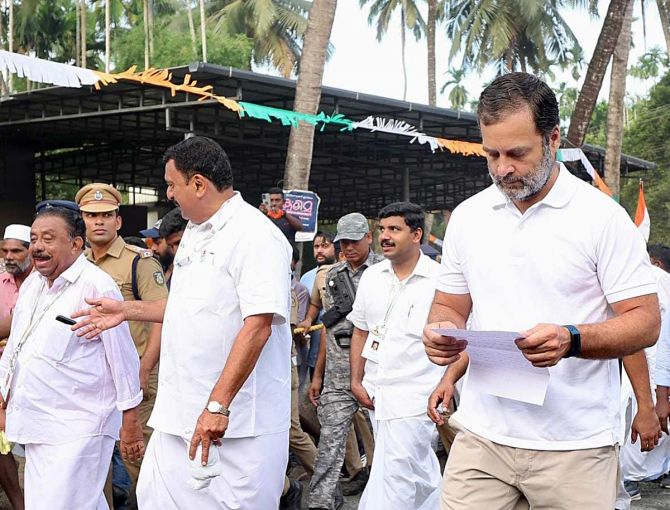 As for the main Opposition group, it has now undertaken a country-wide Bharat Jodo Yatra. Whether it would succeed in attracting people is not clear.

Being yet another effort to make a leader out of Rahul Gandhi, the focus will remain on what he says and does during the course of the trek through a select number of states.

We may be wrong but it is hard to clothe the Gandhi scion with any sort of charisma.

Columnist Virendra Kapoor — former editor of the Free Press Journal and Onlooker magazine was jailed for his views during the Emergency.
You can read his earlier columns here.
Feature Presentation: Aslam Hunani/Rediff.com