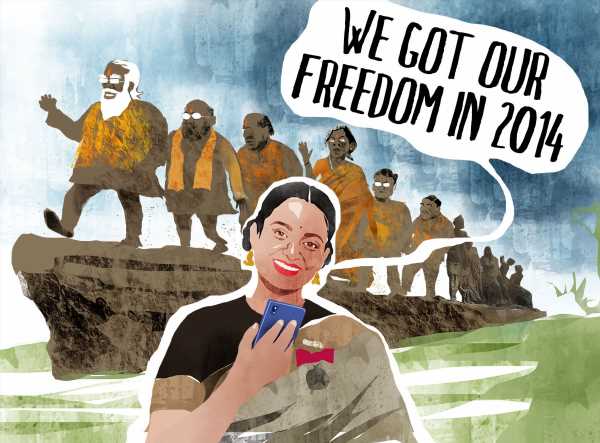 ‘You can’t pull down the nation’s builders and architects to please the people in power.’ Because she gets away with outrageous comments on history, politics and religion, Kangana Ranaut is emboldened to get more and more provocative in her thinking aloud process.

This time she seems to have crossed all limits when a couple of days after receiving the Padma Shri, she declared that India got its actual freedom in 2014, and the version of freedom gotten in 1947 was just bheekh.

Kangana may have wanted to please Narendra Damodardas Modi and his Bharatiya Janata Party with her statement, but the prime minister has reportedly decided to distance himself from Kangana’s wildly inappropriate swipe at the blood, sweat and tears of India’s freedom fighters, coming at a time when the government of the day is celebrating Amrit Mahostav, 75 years of Indian Independence.

“She has been making more provocative statements counting on the ruling regime’s tacit support. This time she failed to see what was coming,” says a leading figure in the Hindi film industry, speaking not surprisingly on condition of anonymity.

“No right-thinking politician would fall for this kind of sycophantic attempt to win brownie points,” this individual adds.

“Prime Minister Modi is not enthusiastic about sycophancy. You can’t pull down the nation’s builders and architects to please the people in power,” explains the individual. “He is far too clever to be flattered by such gimmicky efforts at damning history.”

An entertainer present at the venue where Kangana made the bheek remark confides, “We all flinched. Jab woh kamre mein hoti hai toh hamesha darr laga rahta hai kya bolegi (when she is in the room there’s always the fear of what she would say).

“But this time she has outdone herself,” emphasises the entertainer.

“Who will get us freedom from Kangana Ranaut’s ill-fired salvos?” asks a leading film-maker who wants to cast Kangana in a major historical part. “One never knows what she will say about whom, and what repercussions it would have.”

“How can she play a legend from history when she has scant respect for our history?” asks the epic film-maker after Kangana’s faux pas.