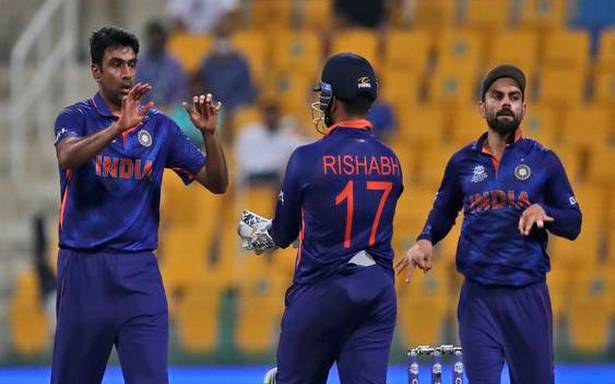 India vice-captain Rohit Sharma says R. Ashwin’s presence in the playing XI is always an advantage as the seasoned off-spinner is on the lookout for wickets at all times

Senior off-spinner Ravichandran Ashwin, who had impressive figures of 2 for 14 on his white-ball comeback, was the best thing to have happened in India’s comprehensive win against Afghanistan in the T20 World Cup, captain Virat Kohli said on Wednesday.

Ashwin, who was playing a white-ball game after four years, was one of the architects of India’s 66-run win against Afghanistan which kept their slim chance of reaching the semifinals alive.

"The return of Ash was the biggest positive, it was something he has worked really hard for," Kohli said at the post-match presentation when asked what was biggest takeaway from the win.

"He (Ashwin) showed this control and rhythm in the IPL as well. He’s a wicket taker and a smart bowler as well." Ashwin, who last played an international game in June in the World Test Championship, finally got a game after nearly four and half months. He was named in the playing XI after mystery spinner Varun Chakravarthy developed a left calf issue.

Kohli said the Sharjah pitch was a much better wicket than those of the earlier two matches and his batters were able to come up with free-flowing batting.

"Much better wicket as well, to be fair. In the other two games as well, if we just had two overs of that free-flowing batting capability, that could have sent the message to the opposition that we’ve put them under pressure.

"T20 is a very instinctive game, even in terms of decision-making. The top three is more or less set unless something like today happens, when the top two go on until over 14 or 15." Kohli said India still have a small chance to reach the semifinals.

"We spoke in the team meeting that we have to focus on the small chance we have (to qualify) and stay positive and hunt that chance down." Asked if the team had come out to go all out, Kohli said, "We don’t decide we’re going all out. We back the guys because they’re so skillful, and sometimes it comes off like today.

"To give credit to the opposition, they bowled really well in the first two matches and didn’t let us get away." India now have a positive net run rate after the big win against Afghanistan and Kohli admitted that NRR was on the back of the mind of the players.

Ashwin is not there to just survive but take wickets at all times, says Rohit

India vice-captain Rohit Sharma says R. Ashwin’s presence in the playing XI is always an advantage as the seasoned off-spinner is on the lookout for wickets at all times.

"He’s a quality bowler, without a doubt. He’s played so much cricket and taken so many wickets, obviously playing for India in limited overs. He also knows that it was a challenge for him because he was playing after three or four years," Rohit said after the game.

"He’s someone who’s a wicket-taking option. Any time you give him the ball, he comes to take wickets. He’s not there to survive or just to bowl his six balls and get away.

"He’s always looking to take wickets, and when you have someone like him in the squad and in the playing XI, it gives that advantage that you have someone in the middle who can take wickets." During his spell against Afghanistan, Ashwin took the wickets of Gulbadin Naib and Najibullah Zadran.

Rohit added, "That’s the quality of him. He understands his bowling really well and has bowled really well in IPL. He’s coming off good form as well, so I’m glad that he could contribute to our success today, and I hope he can do the same in the next few games." Back to winning ways after suffering two big loses against Pakistan and New Zealand, India are now looking to continue in same vein in the remainder of the matches, even as their fate also hinges on results of other games.

Player of the match Rohit Sharma also said that the team wanted to get off to a good start which didn’t happen in the first two games.

"There was a conscious effort to lay a good platform for the other batters to express themselves later. A good start and a respectable total were very important from our side. Exceptional batting from KL as well. "Looking at the trend, they (Afghanistan) have batted first in all their games. We were looking to field first, but it was a good pitch to bat on," said Rohit who scored 74 off 47 balls with the help of eight fours and thre4e sixes.

He said the team knew run rate could come into play and so wanted to win by a good margin.

"Glad that we did that. Whatever the team requires, I’ll try to do that. Today the need was for a quick start. Normally, I try to assess early on but today I had to play a bit differently." Afghanistan captain Mohammad Nabi said his side wanted to bat second because of the dew factor and the wicket looked really good for batting.

"In the end there wasn’t that much dew, but India batted really well on this pitch and put our bowlers under pressure. We didn’t rotate strike well in the middle, and we threw away our wickets and got under pressure."