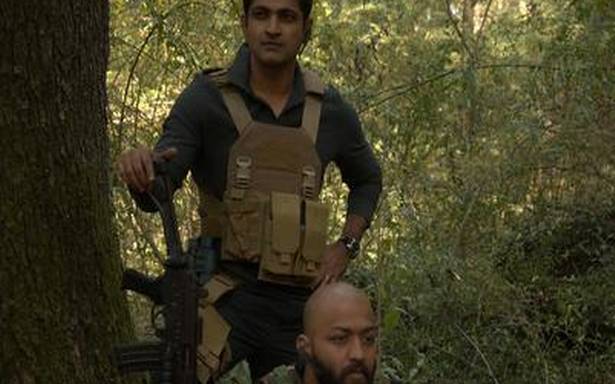 The actors who were part of the on-screen NIA team in the Nagarjuna Akkineni starrer ‘Wild Dog’, share their journeys from fitness and stand-up comedy to cinema

For emerging actors cast in supporting parts, the challenge is to make an impression even when the focus is more on the protagonist. In writer and director Ahishor Solomon’s Telugu film Wild Dog, which stars Nagarjuna Akkineni as an NIA (National Investigation Agency) officer leading a mission to nab a terrorist responsible for a series of blasts across India, the actors who were cast as his team members — Ali Reza, Prakash Sudarshan, Pradeep Rudra and Mayank Parakh — also got noticed.

Both Mayank and Pradeep are known in Hyderabad social circles, Pradeep for establishing the F45 fitness centres in the city and Mayank for his stand-up comic shows.

Kurnool to cinema, via Australia

Pradeep’s is a journey from management to fitness and then cinema. He was born into an agricultural family in a village near Kurnool, and his mother insisted that he study in an English medium school. “The nearest such school was 20 kilometres away; I was put in a boarding school,” he recalls. Growing up in a boarding school taught him to take decisions independently, and this came in handy later.

The interest in cinema had always been there. He had auditioned for a part in director Shankar’s Tamil film Boys in the early 2000s, after completing engineering in Chennai. “I was among the 10 shortlisted boys; I was asked to get a portfolio photoshoot done. It would have cost me ₹7000. I had put aside ₹5000 to process my visa to Australia and I had to take a call.”

Considering the struggles his family had been through, he felt responsible and chose to go to Australia and pursue an MBA. Neverthless, he retained the knack of charting his course without following the herd. While his peers applied for corporate jobs, he became a consultant and took up independent projects: “I earned well and my finances were good. But I yearned for something other than a desk job.”

A freak car accident, from which he escaped unscathed, made him re-evaluate his choices. Unsure of what he wanted to do; he took some time before he zeroed in on entrepreneurship in fitness.

“I did a one-year fitness and nutrition course at the Australian Institute of Fitness, where I was the only Indian that year. I then returned to India,” he says. As part of the founding team of F45, he saw the brand grow to open 30 centres in India within two years. At the fitness centre in Hyderabad, he was privy to several film personalities walking in to train.

A scene from Wild Dog

One of them asked if he is open to lending his voice for a film. As luck would have it, the director felt he would be apt for the antagonist role and asked him to act. Pradeep was signed for Ksheera Sagara Madhanam, which is yet to be released.

Many auditions later, more opportunities followed — a supporting part in the web series Gods of Dharmapuri, Wild Dog and a handful of films that are scheduled to release in the next few months.

Talking about the Wild Dog experience, Pradeep says he had to unlearn what he had learnt as a fitness trainer and take a new approach for the combat moves that needed to be done with stealth. He is happy with the positive response to the film and his performance, and says he is a work in progress. “I took up acting classes and it’s been an ongoing process,” he says.

Next, Pradeep will be seen alongside Adivi Sesh in Major, Nani starrer Shyam Singha Roy and Srinivas Avasarala starrer 101 Jillala Andagadu, apart from an untitled film headlined by Kalyan Dhev.

Mayank Parakh can look poker-faced while on a mission, like he did in Wild Dog, and can also make a gathering laugh aloud when he’s on stage as a stand-up comic.

He calls himself an accidental actor. Acting, both in cinema and theatre productions, happened after he watched Paresh Rawal’s play Kishan Vs Kanhaiya and was mesmerised by the stage performance.

Earlier, Mayank worked as a civil engineer in Hyderabad from 2013 for the L&T Hyderabad Metro Rail project. The Chattisgarh native discovered theatre while in Hyderabad, signing up for acting workshops with Samahaara and Sutradhar theatre groups and performing with them.

“Once the acting bug got the better of me, I went to Mumbai to explore my opportunities in Hindi cinema,” he reminisces. He starred in the web series Lakhon Mein Ek. When he did stand-up shows thereafter, he was introduced as Bala from Laakhon Mein Ek and there was usually a packed crowd to listen to him.

Intermittently, smaller roles in Telugu films like Goodachari also happened. “I was getting offers from Hindi and Telugu cinema but I wasn’t keen on doing insignificant parts. It was a risk to turn down offers as a newcomer, but I did it,” he says.

Wild Dog stayed focussed on the anti-terror mission and there was less scope for stories of the supporting actors, Mayank explains: “But each of our characters had a backstory. My character had been on previous missions with Vijay Varma (Nagarjuna) and thus, we see him understanding his boss’s every move and being second in-charge on the field. Within the given framework, we tried to give some ingenuity to my character. There’s also the aspect of a mysterious past to my character — he has seen the death of his close ones and hence, doesn’t hesitate to embark on a do-or-die mission,” he says.

Mayank is now working on a web series produced by Arka Media and a new Telugu film starring Vishwak Sen. He also hopes to resume stand-up acts once the second wave of COVID-19 declines.