‘He has taught us to take the moment and ourselves seriously.’

Saif Ali Khan has worked with Mr Bachchan only once, in Vinod Chopra’s Eklavya in 2007.

But the bond between the two families goes beyond the professional.

Speaking on his impressions on the actor who defines screen magic for over 50 years, Saif tells Subhash K Jha, “For me, Mr Bachchan stands head and shoulders above every other actor. The comedy scenes, the stylised punch, the bloodshot eyes and black, grimy makeup, and that 1,000-watt smile… He would bring so much conviction and belief to every screen situation .”

The Big B’s baritone figures high on Saif’s list of Bachchan-bests: “The unparalleled dialogue delivery and clarity of diction is a masterclass class to just listen to, whether he is reading his father’s wonderful poetry or speaking to us on KBC.”

“My first impression was of this impossibly commanding presence, standing tall at a film party with his arm in a sling. He explained, ‘I broke it while kicking down a door in an action sequence.’ Then he smiled and I thought it was one of the warmest, kindest and most infectious smiles I had ever seen.”

“He set the gold standard in punctuality. He would write a note with his famous black fountain pen to members of the staff of hotels he has stayed in and been well looked-after. He also writes to us actors if he likes our work in a film. We prize those letters and treasure them more than any other review!

“He is a charismatic and stylish actor and a big influence on us actors, who came after him. The impact he has had on me is such that as recently as Vikram Vedha, I wrote in the margin of a scene… how would Bachchan do it? Hrithik (Roshan) spoke about how influenced he was by Mr Bachchan and I agree. He has taught us to take the moment and ourselves seriously.” 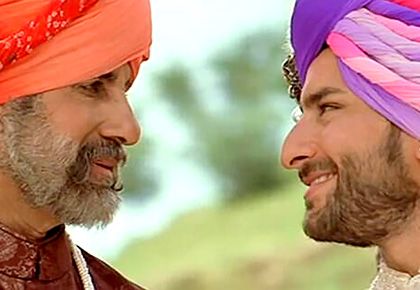