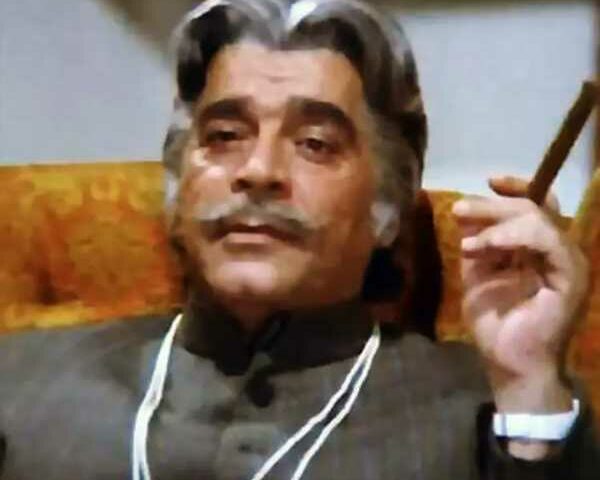 ‘When Ajitsaab pronounced the word lion in his own, unique way, I retained it.’
‘And so, ‘lion’ became ‘loin’ and my dialogue attained cult status after the film’s release.’ 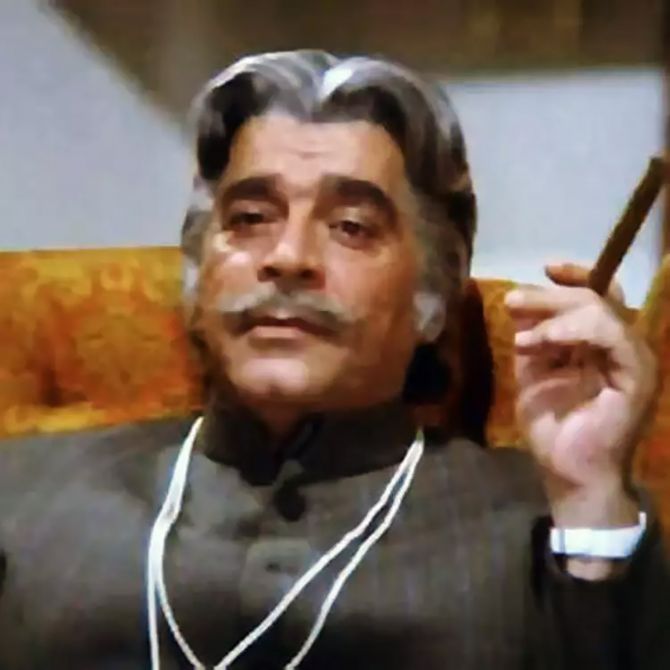 In a career spanning five decades, he worked in almost 200 films.

Twenty-four years later, we still remember him as the ‘Lion’ from Kalicharan, who ruled the screen even without roaring.

Actors enjoy it when their dialogues become famous. Punchlines are the dividends of a great performance,” he says,

Kalicharan was my first film as a director.

It had Shatrughan Sinha in a leading role, a double role, as a fearless cop, DSP Prabhakar, and a fearsome criminal, Kalicharan.

Along with him, I wanted two established actors, one a top-ranking villain, the other a well-known character actor.

For the latter, I had already decided on Premnathji to play Inspector General P N Khanna.

For the role of the suave don, Loin, who masquerades as the philanthropist businessman Din Dayal and hoodwinks the police to orchestrate organised crime, I had Ajitsaab in mind even when I was writing the script.

I had seen his films like Mughal-e-Azam in college, and Zanjeer, in which he played the antagonist, Seth Dharam Dayal Teja, and was acquainted with the power of his performances.

When I was narrating the script, which begins with several phones ringing incessantly, till a man stirs from sleep to flick a switch and answer the one by his side, I confidently told my producer, N N Sippy, ‘This man is the Lion, and he will be played by Ajitsaab.’ While I was very friendly with Premnathji and Shatrughan Sinha, I did not know Ajitsaab at all.

I took an appointment with his secretary and went to meet him in his Bandra home (north west Mumbai).

He welcomed me graciously and invited me to have breakfast with him.

I was amazed because back then, I was just a new boy from the FTII, an actor who wanted to make films.

I told him I wanted to narrate the subject first before we spoke.

He nodded his permission, ‘Okay, carry on.’

He listened to me quietly, then asked, ‘Since when have you been writing this?’

I told him I had been working on the script for the past two years and now, with N N Sippy’s backing, I was ready to direct the film.

‘Yes, you are the best person to direct it,’ he nodded approvingly. ‘The way you just narrated and acted it out to me, I could visualise every scene, every character.’

He immediately agreed to do the film, but admitted that he was given to over-the-top theatrics.

‘You are a new generation director, and an actor too. Mujhe sambhal lena (At times, rein me in),’ he requested.

I quipped with a poker face, ‘But sir, this character is theatrical!’

He started laughing, and from that day, our bonding was cemented.

Actors like Dilip Kumarsaab, Balraj Sahnisaab, even Premnathji, were natural actors who improvised on the spot, you didn’t know what they would say on camera.

As part of my acting course at the FTII, I had been introduced to different schools of acting.

I had sufficient knowledge of the craft which I put to good use when I started directing, using an actor’s aces to my full advantage.

I presented him as the majestic king of the jungle 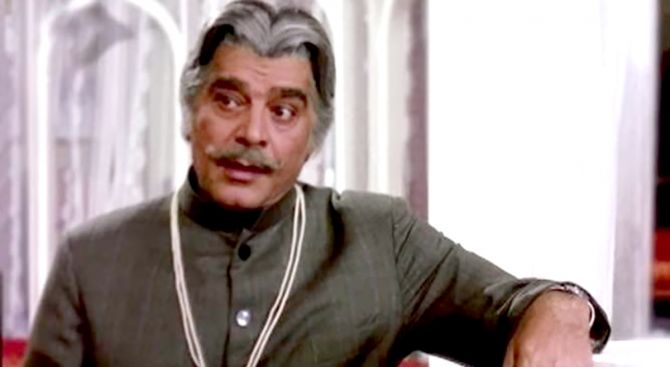 Ajitsaab was a dignified actor, he was never crass, never indulged in frivolous talk.

He was a quiet, well-read man with a regal look and old-world chivalry.

He ruled my imagination, which is why I presented him as a lion, the majestic king of the jungle.

I pitted him against Premnathji and Shatrughan Sinha and gave him the now-ionic dialogue, ‘Sara shaher mujhe Lion the naam se janta hai.’

The word Lion is emphasised throughout my film because the key to the suspense was the NO. 17 which when reversed reads LION.

That’s what alerts Kalicharan to Din Dayal’s real identity in the climax.

It was a gimmick I played up, and when Ajitsaab pronounced the word lion in his own, unique way, I retained it.

And so, ‘lion’ became ‘loin’ and my dialogue attained cult status after the film’s release.

How will you tackle an imposter? 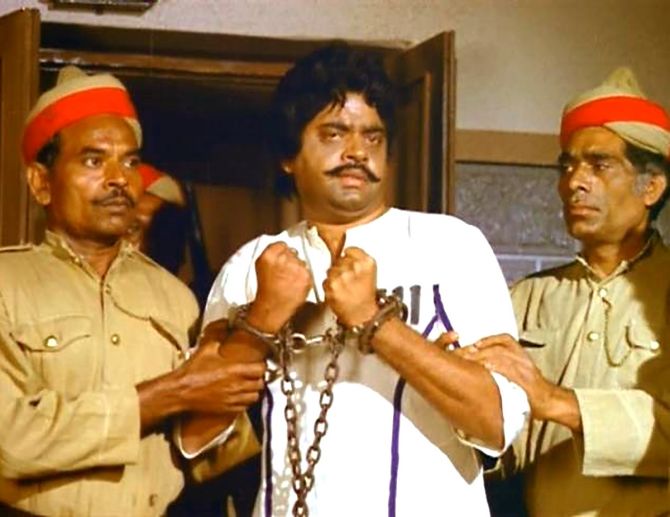 We are Indians. For us, English is a foreign language and we speak it with a distinctive accent.

I tapped this in my film, using English as a plot point to unmask Kalicharan.

When Shetty reveals him to be an ignorant labourer, who, like him, was serving out a life sentence in prison, and not DSP Prabhakar, the wily Lion puts Kalicharan through a language test.

He poses a very simple question to him, ‘As a police officer, how will you tackle an imposter?’

The words, spoken in an alien tongue, baffles Kalicharan.

Even as he nervously stutters, ‘Yes… No… No… Yes’, I had Ajitsaab as the Lion repeat the question three times, even as I zoomed in for a trolley shot.

The fourth time, he screams, ‘How will you tackle…’ before breaking into maniacal laughter and telling the imposter standing before him that the inspector general had made one fatal mistake.

‘He taught anpad (uneducated), gawar (illiterate) Kalicharan everything except English,’ he guffaws, asking his henchmen to bring the children.

Ajitsaabcarried off that scene with aplomb.

Even after 46 years, it remains one of the highlights of the film, as also his dialogues.

Punchlines the dividends of a great performance 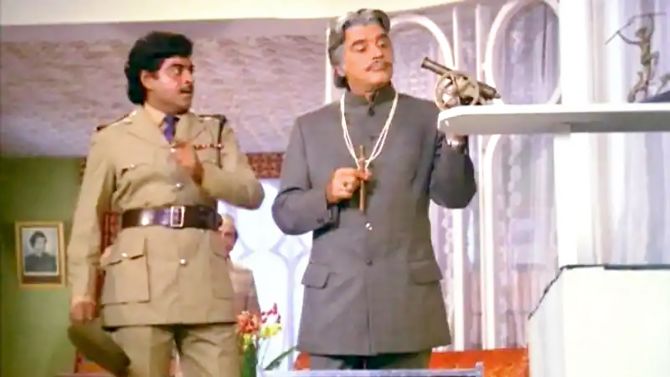 I am good with punchlines.

Actors enjoy it when their dialogues become famous.

At shows and events, the anchor uses these punchlines to introduce them and the audience clamours to hear them in their voice.

Punchlines are the dividends of a great performance.

The credit goes as much to the actor, as the writer and director.

‘Kitne aadmi the?‘ taken alone is just an oft-heard question.

It the way Amjad Khan delivered it in Sholay as Gabbar Singh that made the three simple words an oft-repeated iconic dialogue.

I did not introduce Ajitsaab in Kalicharan, I used the power of his stardom and his histrionics to carry forward my film.

I had promised him during the narration, ‘Jo maine aap ko abhi samjhaya aur batayaWhat I just sketched out for you) that is what you will see on screen.’

After seeing the film, he told me, ‘I see exactly what you narrated to me. That’s why I signed it.’

It’s a compliment I cherish to this day. All through my career, I have cast a film according to the subject.

There were times when big stars approached me, samne se, for films like KhalNayak.

They were ready to give bulk dates, even make concessions in their price, and while I respected them, was overwhelmed by their gesture, I would tell them gently, ‘You are too big for this role.’

It’s a principle I have stood by for 50 years.

Yes, there were a couple of times I faltered, and suffered for the miscasting.

So, after a point, I learnt not to compromise knowing a good script, requires the right casting.

Of course, this meant that I did not have the pleasure of working with Ajitsaab again because I did not find another role that suited him to the T. 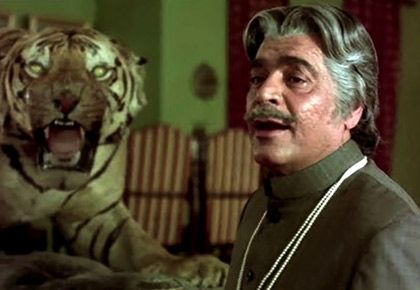