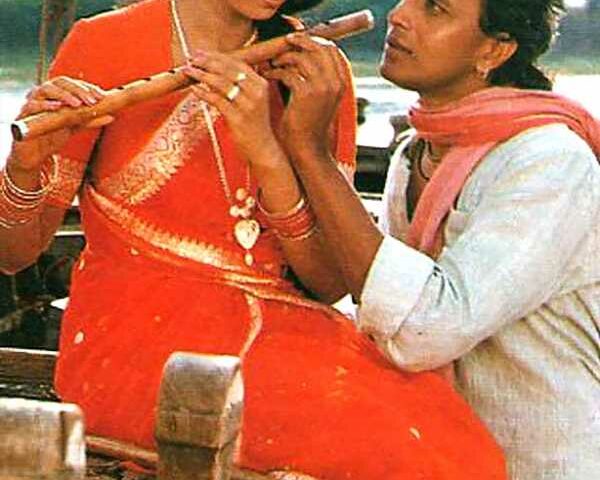 Though it was Himmatwala that launched her into stardom in Bollywood, she first starred in this unsuccessful nugget, produced by Rakesh Roshan and directed by the inimitable K Vishwanath.

Sridevi shone as a temple dancer wooed by a Brahmin boy (Rakesh Roshan) and a socio-economically challenged underdog (Mithun Chakraborty).

She danced and emoted as though there was no tomorrow. The true coming of age of one of India’s finest actresses.

As a girl, who after an accident, regresses into childhood, Sridevi conveyed all the nuances of her character’s predicament without getting over-cute.

The performance is so accomplished and complete that it never ceases to astonish.

Sridevi’s formidable co-star Kamal Haasan thinks she did the character even better in the Tamil original Moondram Pirai. We could say the same about him. 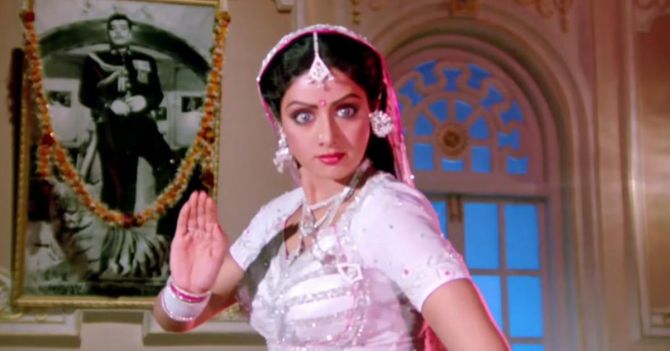 An awful film, but what an impact!

Sridevi played a snake-woman, slithering on the floor and dancing to Amrish Puri’s music, as Lata Mangeshkar sang the chartbuster Main Teri Dushman.

Does anyone remember anything else about this Harmesh Malhotra creation? 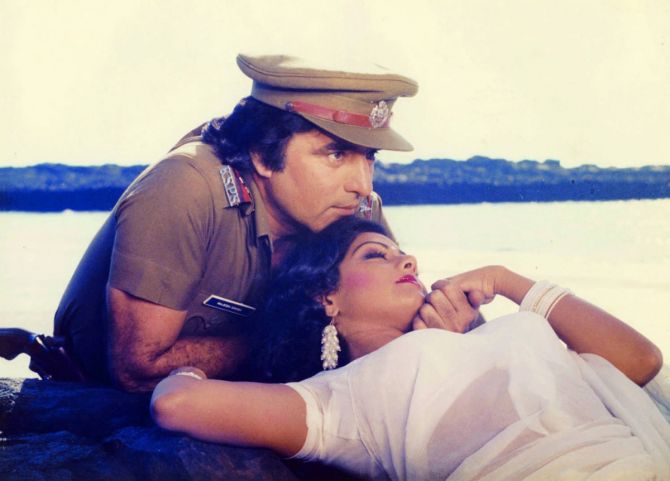 In Feroz Khan’s Janbaaz, Sridevi had a brief role as his beloved.

But her presence in the glowing orange chiffon sari dancing to the sound of Har Kisiko Nahin Milta lingers. 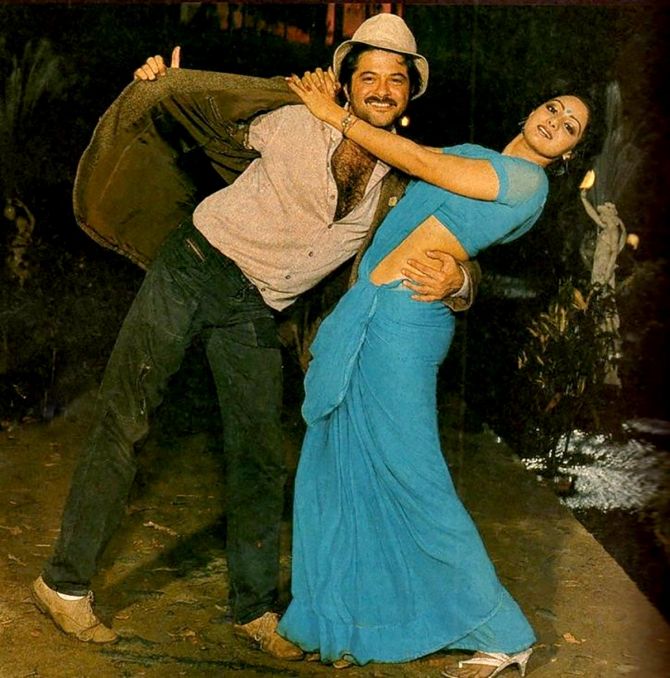 Shekhar Kapur’s Mr India was a turning point in Sridevi’s romance with the camera.

Playing the perky journalist who hates kids, the actress was amazing.

If Sridevi’s comic timing in the Charlie Chaplin impersonation sequence was impeccable, she oozed sensuality in that iconic blue chiffon sari in the song Kate Nahin Katte. 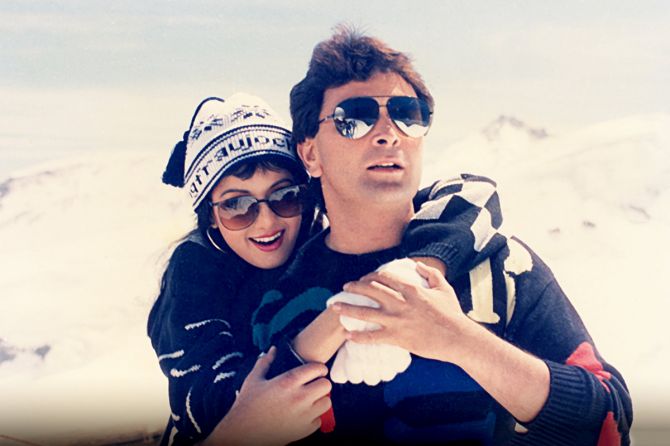 Sridevi delivered a knockout performance, which straightway propelled her to the top position.

The film was an extended show-reel of her talent as she danced, sang, giggled and wept for the love of wheelchair-bound Rishi Kapoor.

Seldom has any Yash Chopra heroine made such sumptuous use of the camera space. 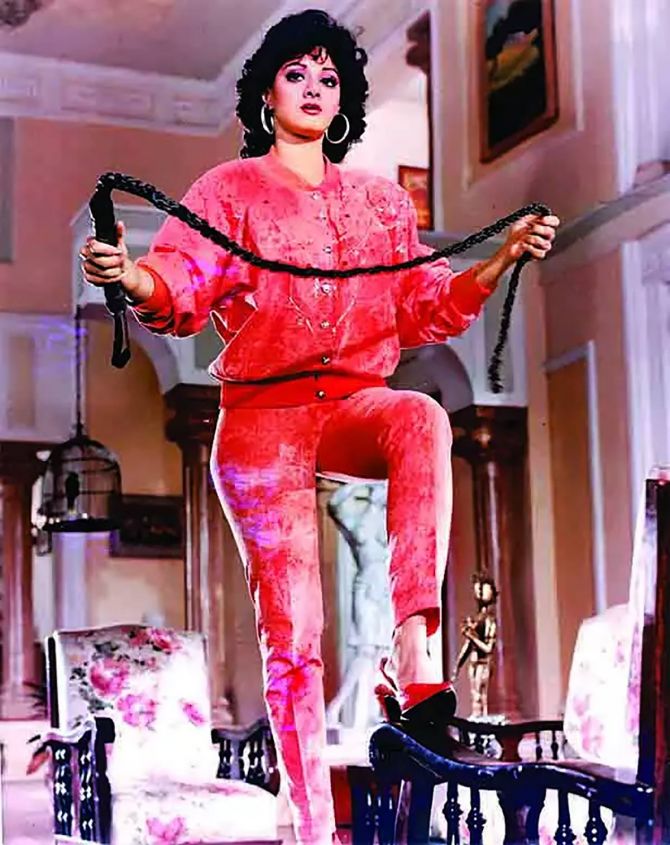 Released in the same year as Chandni, Sridevi wowed audiences with her double role as the docile Anju and the tomboyish Manju.

Though Dilip Kumar and Hema Malini had done the same double role before, Sridevi brought an added zest to the role.

Director Pankaj Parashar let the actress have all the fun she wanted. 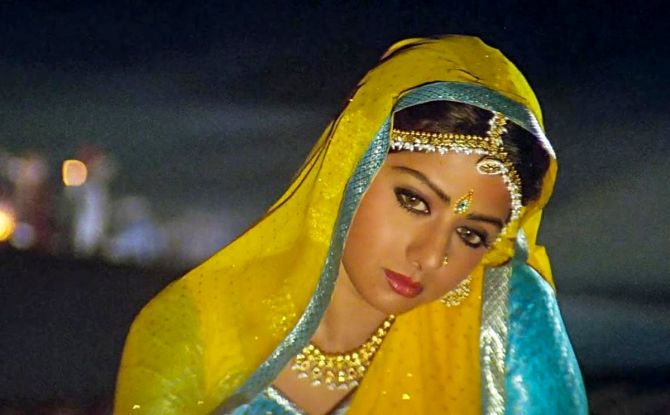 After Chandni, Yash Chopra brought Sridevi back to the screen in this bold love story of a girl who dares to love a man old enough to be her father.

Sridevi played both the mother and the daughter with such distinctive flair that we wondered if the same actress could do so many emotions in the same film. 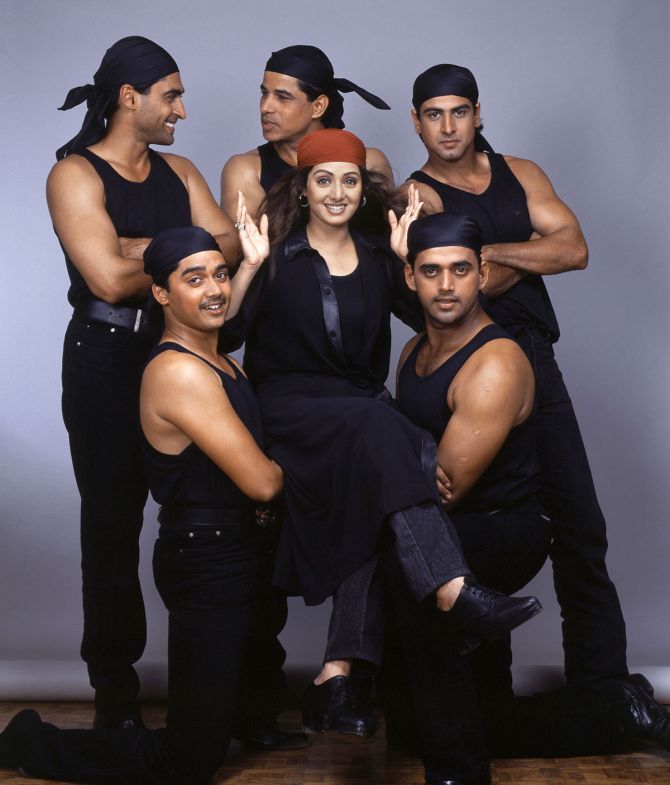 Army is only film where Sridevi starred with Shah Rukh Khan.

There is a sequence where Shah Rukh, playing her husband and a soldier, is brought home dead.

Since he would always play these ‘I-am-dead’ pranks on Sridevi, she presumed this was one of them.

The way she goes from giggling to shock and finally breaking down is a textbook of pitch-perfect acting.

Sridevi played Sanjeev Kumar’s role in Sholay, of a woman, who hires mercenaries to avenge the villain (Danny Denzongpa).

As it often happened, Sri was far superior to the material offered to her. 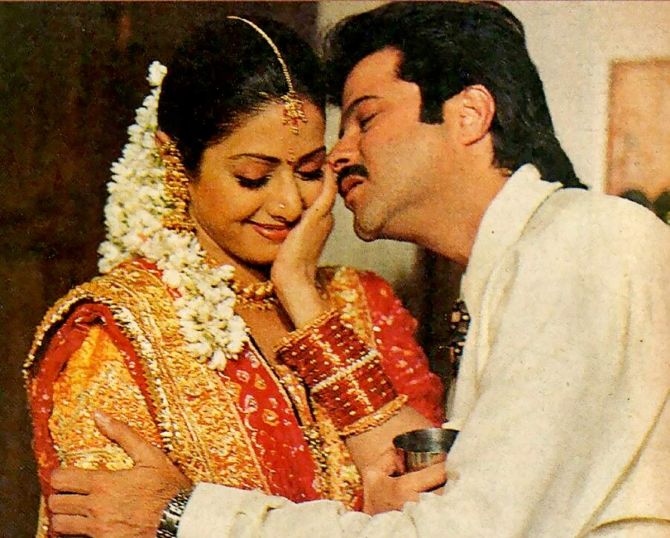 Judaai was her last hurrah before she bowed out to play real life wife and mother.

Raj Kanwar’s film saw Sridevi at her best, as she enhanced mundane scenes. English Vinglish is a fabulous tale of a woman’s self-actualisation.

Sridevi’s Shashi breaks up a little every time the three most important people on her life — her husband, daughter and son — crack up at her vernacular accent.

Then comes the chance for redemption: A three-week vacation in the USA, a clandestine crash course in English and best of all, a chance to feel special when a fellow classmate gives Shashi the attention she doesn’t get from her husband.

Debutante Director Gauri Shinde won over the audience at the story-level itself.

Much of Shashi’s inner power comes from Sridevi owning the role. This actress simply vanishes into her character, from Shashi’s laddoo-making to self-actualisation.

‘I could never imagine it would connect in such a way with people all over the world,’ Sridevi had said.

‘It’s a life-changing film. My daughters were a part of my life when it happened. Of course, they had seen my films on television. But this is the first time I did a film that they saw happening. They liked what I did in English Vinglish and for me, that was the greatest happiness.’ 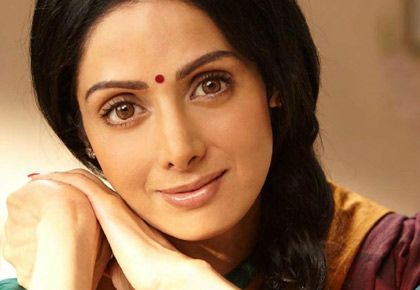