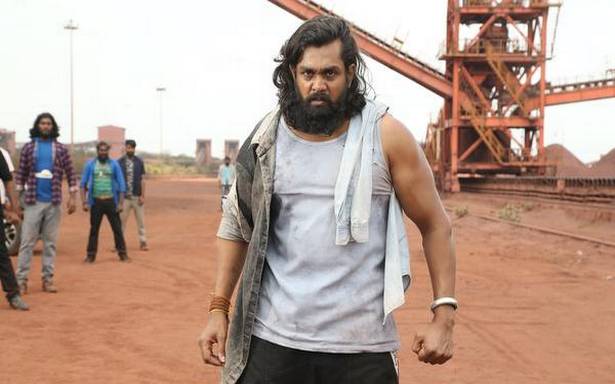 Actor Dhruva Sarja on taking the ‘action’ route like his uncle Arjun Sarja, and filmmaker Nanda Kishore explains why he used international bodybuilders as antagonists in ‘Pogaru’

In the 10 months since it was uploaded to YouTube, ‘Karabuu’ — a song from the Dhruva Sarja-starrer Pogaru — has been viewed over 200 million times, which leaves its popularity in no doubt. Nevertheless, the song also drew criticism for showing the film’s leading man trouble the woman he fancies (Rashmika Mandanna), in a bid to woo her.

The film’s director, Nanda Kishore, who was in Chennai recently along with Dhruva to promote Pogaru, ahead of its release in Tamil on February 19 (titled: Sema Thimiru), does not think it warrants a discussion. “A teaser or a song is not the full movie. What people have seen is only a glimpse,” he says, adding that Dhruva’s character in the film justifies it.

“He plays a ruffian. But even the baddest guys have life partners. How the two find common ground despite the differences is what we have shown. [Rashmika] plays a teacher. She sees the kid in him (Dhruva) and wants to make sure he turns over a new leaf and becomes a responsible person,” Nanda Kishore adds.

Dhruva, who is billed as the ‘Action Prince’, is the nephew of actor Arjun Sarja. Although he made his film debut in 2012, Pogaru is only the fourth film in Dhruva’s career.

Having starred in action-comedies prior to this, Dhruva says, “Pogaru is a family film. It is a story about a mother and her son. They split when he is 17. Why that happens, how or whether they get back together is the story,” he says.

Nanda Kishore admits to have conceptualised the film as a multilingual project — Pogaru releases in Kannada, Tamil and Telugu.

“It is the reason why we didn’t localise any aspect of the story, or set a location for the events. That helps us to present the film in Telugu and Tamil,” he says. Why not release in Hindi as well? “This film can, perhaps, be remade in Hindi but it cannot be dubbed into the language. The elements and narrative are distinctly South Indian,” Nanda Kishore clarifies.

An interesting aspect of the film is the use of four international bodybuilders to take on the protagonist. The crew enlisted Kai Greene, the former Mr Olympia runner-up from the USA, Frenchman Morgan Aste who is nicknamed The Big Rock, South African fitness professional John Lucas and German fitness model and influencer Jo Linder.

Dhruva himself had to bulk up to match the monstrous bodies of his antagonists. “I had to drop 35 kilograms to first play a 17-year-old version of myself for the opening portions of the movie. Then I added the lost weight back,” he says.

Altogether the crew shot the film for 110 days. However, filming with professional bodybuilders comes with its own set of challenges, especially while filming stunt scenes.

Nanda Kishore explains, “We tried to rope in WWE wrestlers but their contracts meant they couldn’t come. So we hired these trained professionals but the problem was they don’t have control when it comes to punches and kicks. Dhruva had to take hits for real. In fact, there is a stunt sequence where Jo Linders lands a kick on his chest, and for four days after that Dhruva was coughing out blood.”

Dhruva adds: “It went fine for a couple of days but afterwards they came up to me and said ‘Listen, if we get a chance we will land a few real punches. You too can punch and kick us for real if you get the chance.”

Are these risks worth taking? The actor smiles and replies, “It is cinema. You have to take a few risks.” Dhruva’s answer comes from a place of having to continue “a legacy” — in his words. “My uncle has the moniker ‘Action King’. My father was a wrestler too. There is pressure to live up to the legacy and take it forward. So I see this all as a requirement of the job, even to keep up this appearance,” he says.