Kartik Aaryan looks promising, but the trailer not so much, observes Namrata Thakker.

Akshay Kumar and Vidya Balan’s blockbuster film Bhool Bhulaiyaa, which released in 2007, is considered a classic in the horror-comedy genre.

Its sequel starring Kartik Aaryan, Kiara Advani and Tabu is ready to hit the theatres on May 20.

Directed by Anees Bazmee, the Bhool Bhulaiyaa 2 trailer is out and despite garnering a good amount of buzz, the film looks pretty average.

The trailer starts and ends on a high note, courtesy the popular song Ami Je Tomar, but what happens in between is hardly funny or spooky.

Kartik Aaryan plays Ruhan who is eager to catch the evil spirit Manjulika.

Kiara Advani plays his love interest Reet whereas Tabu’s character warns Ruhan not to mess with Manjulika as she is no ordinary ghost.

Of course, Ruhan ends up doing the opposite and now Manjulika is back, roaming an old haveli.

Unlike the original movie, Bhool Bhulaiyaa 2‘s story hardly has anything exciting to offer.

Kartik, who has tasted success in the comedy genre, looks promising because of his quirks and antics. What may let KA down is the writing. Most of the jokes in the trailer either don’t land or aren’t funny enough.

In the trailer, Kiara gets into the Manjulika mode for a bit, but she comes across too nice to look the evil spirit.

Tabu gets a decent amount of screen time in the trailer, but not much is revealed about her character and that’s quite interesting.

Rajpal Yadav from the original cast has been retained and it’s good to see him in his element, even if it’s for a few seconds.

The VFX is shabby too, making the film look a lot less scarier than the original. 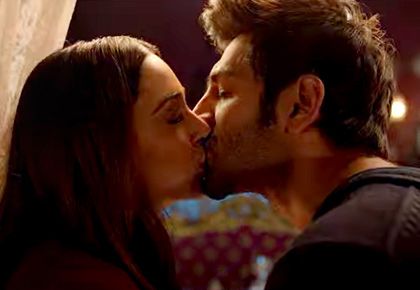