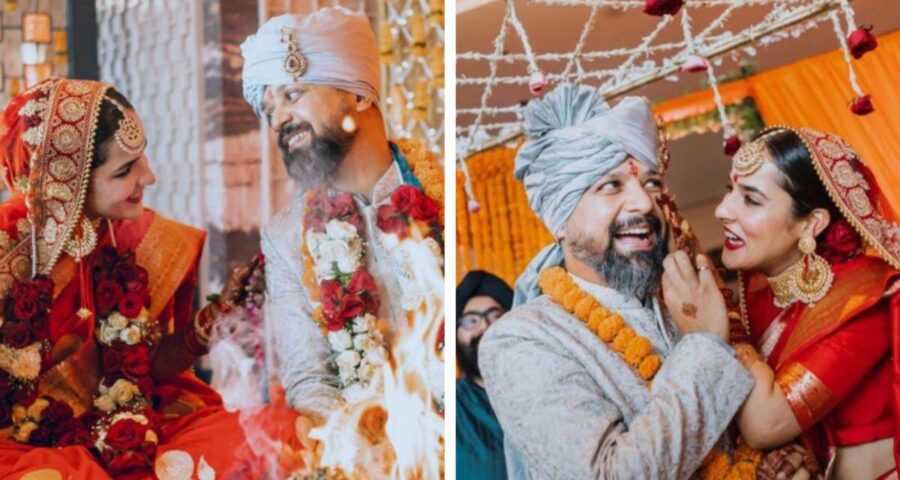 Angira Dhar and Anand Tiwari married in a private ceremony in April and recently announced their nuptials. They have shared new photos from their wedding ceremony on social media. Actor Angira Dhar took to Instagram and shared a photo of filmmaker Anand Tiwari getting emotional at their wedding. The couple, who got married in April, have been sharing photos from the intimate ceremony.

In the latest photo, Angira Dhar is wiping Anand’s tears as her ‘vidaai’ happens. She captioned her post, “You know you are in the right hands when it’s not you who’s tearing up at the vidaai.” The photo received much love from Vicky Kaushal, who had worked with Angira in Love Per Square Foot. Harleen Sethi commented on the picture with, “Heart is full.”

Anand Tiwari and Angira Dhar, who worked together in Love Per Square Foot, tied the knot in a rather hush-hush ceremony in April. This week they announced the news on social media. Anand shared photo on his Instagram account, with the caption, “On 30-04-21 Angira and I sealed our friendship into a marriage, with our family, closest friends and God as our witness. With life slowly unlocking around us, we wanted to unlock this happiness with you,” Anand had written.

Angira looked resplendent in red on her wedding day, while Anand complemented her in a cream-coloured sherwani.

Angira Dhar has starred in the web series Bang Bajaa Baraat and was seen in Commando 3.