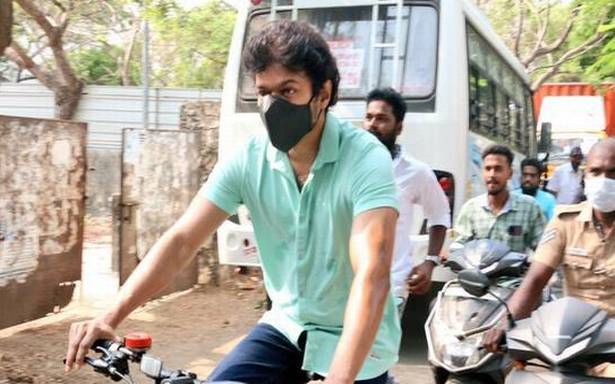 The ‘Master’ star made news by opting to cycle from his house to the booth in Neelangarai, which attracted a huge crowd of bikers on the road keeping pace with him

Vijay made news by opting to cycle from his house to the booth in Neelangarai, which attracted a huge crowd of bikers on the road keeping pace with him. After he cast his vote, the Master star was mobbed by the onlookers, and had to leave on a two-wheeler with one of his staff members, as the police tried to control the crowd.

Vijay after casting his vote

Pictures of Vijay riding his cycle went viral on social media, with several fans posting that it was a political statement made by the actor to protest against the petrol and diesel price hikes.

However, Vijay’s team soon after released a statement clarifying the reason, “The polling booth is in the street behind his house, and since it’s a narrow area, it would have been difficult to park his car there. This is why he opted to ride a bicycle instead, and there was no other motivation behind his actions.”

Actor Ajith, who went to vote along with his wife Shalini, also was caught in a spot of bother as fans tried to mob the star at the booth. The Valimai star grabbed a phone away from an unmasked man trying to take a selfie, visibly upset at the chaos around him. He later apologised and returned the phone.

Rajinikanth and Kamal Haasan were careful to ensure that they kept the crowds at a safe distance.

Kamal, who is contesting from the Coimbatore South assembly constituency, went to vote with his daughters Shruti and Akshara. Akshara later also posted a selfie on social media from the morning.