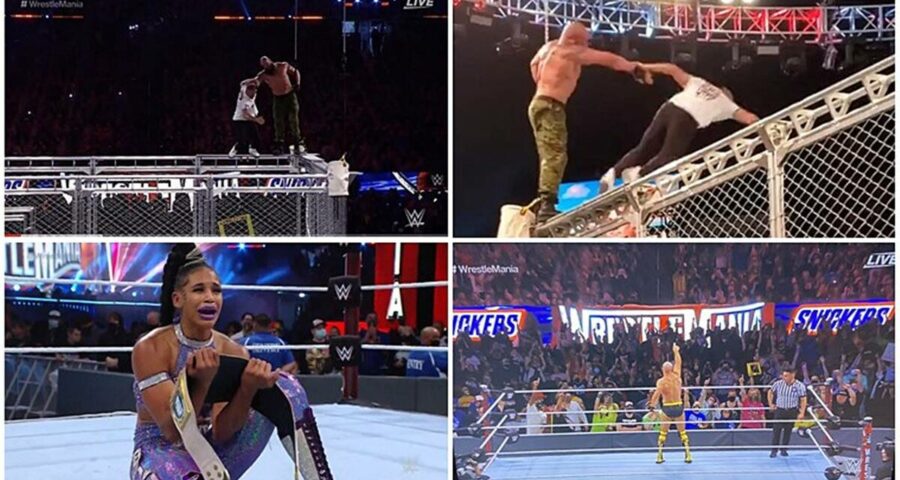 WWE Wrestlemania 37 2021 Day 1 Results: WWE kicked off in front of the live audience for the first time in over a year.

WWE Wrestlemania 37 2021 Day 1 Results: WWE kicked off in front of the live audience for the first time in over a year at The Showcase of the Immortals. And it was only fitting that WWE’s biggest event of the year kick off with WWE Chairman Mr. McMahon and the entire WWE roster welcoming the WWE Universe back before sharing in Bebe Rexha’s stirring performance of “America the Beautiful” with the crowd at Raymond James Stadium.

Although the Tampa Bay weather delayed The Showcase of the Immortals for a few minutes, WrestleMania was officially back in business.

Bobby Lashley toppled Drew McIntyre to retain the WWE Championship at Night 1 of WrestleMania 37 at Raymond James Stadium in the first match in front of the WWE Universe in more than a year. MVP played a decisive role. With his distraction disrupting McIntyre’s cadence before a Claymore attempt, Lashley had time to dodge his challenger’s feared attack.

Lashley then applied the Hurt Lock after several earlier failed attempts. Despite spirited attempts to escape, McIntyre had nowhere to go and was rendered unconscious, prompting a referee stoppage.

In the biggest match of his nearly decade-long WWE career, Cesaro answered the call.

The Swiss Superman knocked off Seth Rollins in his first-ever singles match at The Show of Shows, seizing his WrestleMania moment.

After weeks of bullying and ridicule, Shane McMahon’s debt came due on The Grandest Stage of Them All.

Braun Strowman dismantled Shane-O-Mac in awe-inspiring fashion, winning only the second Cage Match in WrestleMania history and the first in 35 years.

Strowman made his foe’s worst fears come true, dragging Shane atop the cage before tossing him to the mat like a bug with a deafening thud.