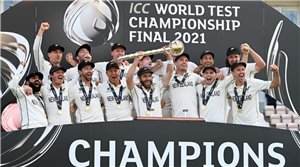 New Zealand hold their nerve at various stages on the final day to become World Test champions, a result of administrative foresight as much as sporting talent. 2015, Heartbreak in Melbourne. 2019, Heartache in London. 2021, delirious joy at a sun-soaked Southampton. Even as India worryingly continued to trip up in knockout games, New Zealand, the team that not even the most parochial Indian fan can stir up any negative emotion for, admirably held their nerve to become world Test champions.

It would be tempting to see Wednesday’s eight-wicket win as a romantic story of redemption for the nice guys, as the night when the Cinderellas of world cricket didn’t have to flee in despair, but that would be disrespectful. This is a team of highly-talented players – skillful, passionate, professional, ambitious, intensely disciplined, and now, a bunch that knows how to win.

There was a moment from every phase on the final day that screamed out their nerveless approach. Young Kyle Jamieson bossed around like Gulliver in the land of Lilliput in the morning. He erased India’s biggest chances of a win and a draw respectively by taking out Virat Kohli and Cheteshwar Pujara.

In the afternoon, when India tried to hang on for dear life, Neil Wagner had to contend with a soft old ball, but dug deep to unearth life on a sunbaked pitch that was playing at its best to harass with an awe-inspiring bumper barrage and remove Ravindra Jadeja.

When Rishabh Pant continued to tempt fate with a chancy knock that seemed like a self-parody of sorts, Trent Boult, who had been listless all game, stood up for the count. He was lucky to get Ajinkya Rahane with a down-the-leg-side strangle and kept putting it there to help Pant cancel himself. It wouldn’t still have been enough but for a marvellous catch from Henry Nicholls, who ran back from gully to hold on to a difficult swirler over his shoulder.

When Ravichandran Ashwin expectedly took out the left-handed openers relatively early in the chase, Kane Williamson and Ross Taylor showed how to soak up pressure. It didn’t come easy. Mohammed Shami got the ball to cut around, Ashwin was tantalisingly good, and even Jasprit Bumrah, who had had an average game, managed to rouse himself to produce a probing spell right in the end. Jadeja didn’t give anything away but Williamson and Taylor were ready and primed for the greatest evening of their careers.

Neither is this an overnight triumph. For those who have been involved with New Zealand cricket, it’s the culmination of hard toil for over two decades.

When Williamson was five, New Zealand cricket went through its most important structural reforms. It was mid 1990s and Kiwi cricket was lurching from one crisis to another. Disciplinary issues in the national team too cropped up but the structural issues were far direr, and the fans were falling out of love with the sport. Crisis meetings were held, one turned rather acrimonious – the chief executive resigned prior to it and furious debates ensued, but New Zealand cricket went through the soul-searching process.

A watershed report came through – the Hood Report of ’95 – which prescribed an overhaul of the system. The governance structure was changed, and ways devised to increase fan-following of the game. Some of the changes were not too dissimilar to what Justice R M Lodha would suggest in the Indian scenario decades later.

A new cricket board came in in ’95 as the previous board of elected association representatives was replaced with a dispensation of independent members known for their business and cricket expertise. They went for active intervention – a top-down approach to revamp the grassroots. School cricket began to flourish, infrastructure was spruced up, and money spent productively. Williamson was nurtured through this system and his rise is as much a story of a rejuvenated system as it is for individual triumph.

Immigrants too have helped. Largely from South Africa. Every year, 10,000 South Africans land up in New Zealand, a country that has upwards of 60,000 migrants, looking for a better life. Not a surprise that some fall in love with cricket. BJ Watling, the scrappy fighter who played his last Test in Southampton, came to New Zealand when he was just nine. The mulleted-wonder Colin de Grandhome came when he was a teenager. So did Grant Elliot and Wagner. Jamieson came when he was a kid. New Zealand’s system was ready to nurture these talents.

Last time he was in England at the end of an ICC final, Williamson was left devastated. The ODI World Cup had just slipped out of his hands, and he stood there at the team balcony, staring at a distance, surrounded by his teammates but looking forlornly alone.

Not this time. Befittingly, Taylor was with him till the sweet end. In all probability, this is Taylor’s last year in international cricket and both have experienced despair together at various corners of the world. But here they were on a rare sunny English day, clasped in an emotional hug mid pitch – a poster for posterity.