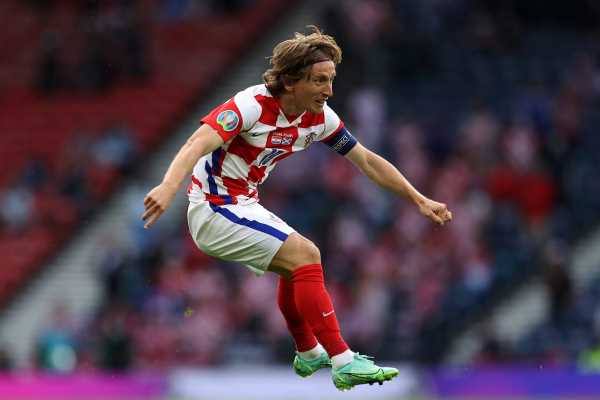 The league stage in Euro 2020 was completed on Wednesday with the last round of matches in Group F.

France, Germany and Portugal were the last teams to make it to the last 16 albeit after much uncertainty till the final whistle.

While World champions France and defending champions Portugal were involved in a thrilling 2-2 draw that saw three penalties and Cristiano Ronaldo and Karim Benzema scoring twice in the match, a late Leon Goretzka goal salvaged a 2-2 draw for Germany against Hungary.

Rediff.com looks at the five best goals from the concluding round in the league stage. Trust Luka Modric to come up with something out of the ordinary. Just when his form was being called into question at Euro 2020, the 35-year-old midfielder delivered. And it was in style, during Croatia’s 3-1 win over Scotland in Group D.

The 2018 World Cup runner-up’s magnificent finish, in the 62nd minute, into the top corner of the Scotland goal gave Croatia a 2-1 lead and put them on course for a last 16 berth.

The goal was the result of excellent teamwork by the Croatia players, who worked the ball nicely down the middle and around the Scotland box before teeing up the Real Madrid midfielder. Captain Modric, who had lurked on the edge of the box, waiting for the ball to come to him, controlled the spheroid delicately and with the outside of his right foot dispatched it into the top left corner of the net, much to the surprise of the Scotland defence.

Modric had a quiet outing in Croatia’s first two group matches having been forced into deeper positions. But against Scotland he displayed his class as the playmaker which won him the Ballon d’Or in 2018.

He is now the youngest and oldest player to score for Croatia at the European Championship. His first Croatia goal was when he was 22 years and 273 days, against Austria in 2008. At 35 years, 286 days, his wonder goal against the Scots, which will go down as one of the best in this edition of Euro 2020, made him the country’s oldest scorer.

Indeed, Modric continues to mesmerise with country and club. After struggling in his first two Euro 2020 outings and facing calls to be dropped, France’s Karim Benzema repaid coach Didier Deschamps’s faith, scoring twice to help the World champions qualify atop Group F after a 2-2 draw against Portugal in Budapest.

Back in the squad after a nearly six-year absence, Benzema looked out of sorts in the first two matches against Germany and Hungary and there were doubts whether he would deliver in the crucial outing.

But, he did. Before the tournament, in a warm-up game, the Real Madrid forward had missed a third consecutive penalty for France. Yet, it was he who stepped up for a penalty on the stroke of half-time – rather than fellow strikers Kylian Mbappe or Antoine Griezmann – to wrongfoot Rui Patricio and make it 1-1 after Cristiano Ronaldo had put Portugal ahead, also from the ‘spot’.

Then came the icing on the cake when Benzema put France ahead. He controlled his run to beat the off-side trap and latched on to Paul Pogba’s through ball down the right before running past two Portugal defenders to angle the ball into the far corner of the Portugal net past goalkeeper Rui Patricio.

It was a gem of a goal. After 2,085 days, Benzema scored for France again. The last time he found the net for his country ahead of Wednesday’s Euro outing was on October 8, 2015, in a 4-0 win over Armenia in Nice, when he scored twice in just two minutes.

After that game, he played just twice more for France in 2015 before a six-year absence from the national team. Ahead of Euro 2020, he played in friendlies against Wales – missing a penalty – and Bulgaria.

Touch regained, as we head into the knock-out rounds France will be counting on him to add to that tally. 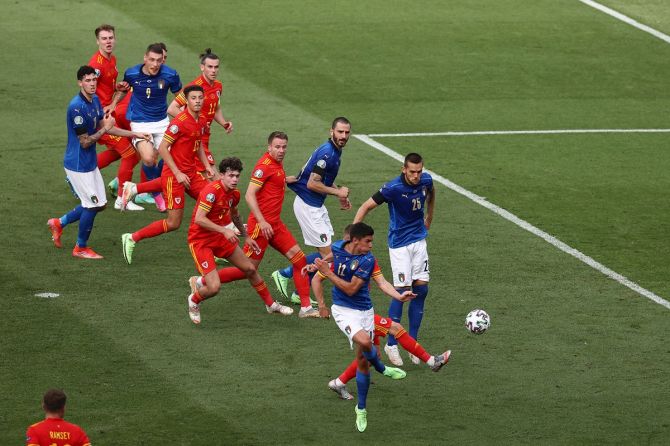 Italy, already guaranteed progress from Group A, made sure of first place in Group A with a 1-0 victory over 10-man Wales on Sunday. Matteo Pessina’s first half goal cliched victory for a new-look side that extended Italy’s unbeaten run to 30 games, equalling their all-time best run recorded from 1935 to 1939. The Azzurri also kept a clean sheet for an 11th consecutive match to underline their credentials as potential tournament winners.

Already through to the knock-out stages, coach Roberto Mancini made eight changes to his starting line-up. One of them was Pessina. The midfielder, who plays for Atalanta in Serie A, only made the playing eleven following an injury to Stefano Sensi and made most of the opportunity, scoring 20 yards from the Wales goal in the 39th minute.

Returning midfielder Marco Verratti won a foul and off the resultant free-kick whipped a low floater across a host of Wales defenders and teammates. Pessina got in line with the near right post and deftly diverted the ball with the instep of his right foot. In the wink of an eye the ball was lodged in the far corner Danny Ward’s goal. 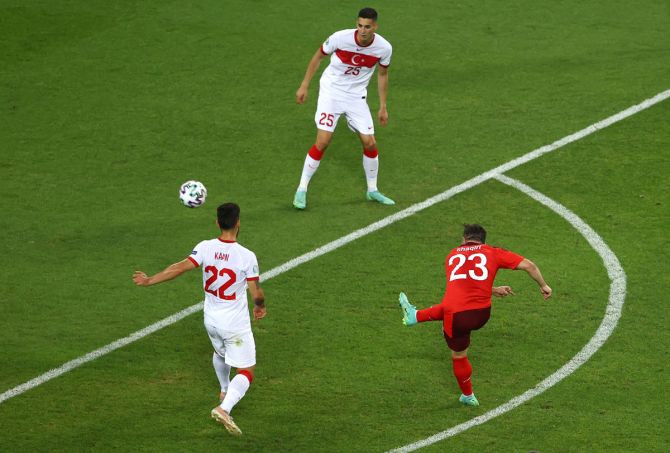 Xherdan Shaqiri’s superb double helped Switzerland secure third place in Group A on Sunday with a 3-1 win over a dismal Turkey, who were sent packing after another defeat.

The victory left the Swiss, who finished level on four points with Wales but behind on goal difference, hoping to secure a spot in the knock-out round as one of the four best third-placed finishers from the six groups.

Having taken the lead in the sixth minute through Haris Seferovic, the Swiss struck again 20 minutes later when Steven Zuber, who provided the pass for the first goal, found Shaqiri in a similar position, and the Liverpool midfielder curled an exquisite shot beyond the despairing dive of Turkey goalkeeper Ugurcan Cakir.

Irfan Kahveci pulled one back for the Turks in the 62nd minute with a spectacular strike from distance to reduce the deficit but the joy of their thousands of supporters in the stands felt was short-lived as Shaqiri fired home another Zuber pass to complete a surging counter-attack.

Their industrious performance and Shaqiri’s finishing bodes well for the next phase which sees them up against France in the last 16. Needing a victory to have any chance of progression, Mikkel Damsgaard lit the touchpaper with a 38th-minute wonder goal on a head-spinning night in the Parken stadium in Copenhagen to pave the way for Denmark’s 4-1 thrashing of Russia and a place in the last 16.

Christian Eriksen’s replacement produced a moment of magic in the 38th minute.

Receiving a pass from Hojbjerg, he took a silky touch with his left foot and opened his body to swerve a majestic shot beyond Russia keeper Matvei Safonov. A dreadful mistake by Russia’s Roman Zobnin, who  Zobnin inexplicably played a pass back towards his keeper, gave Yussuf Poulsen the simplest of tasks to score and double the lead on the hour.

Russia’s giant striker Artem Dzyuba however converted a penalty to pull a goal back and set up an interesting.

The mood in the stadium became jubilant as news filtered through that Belgium had finally taken the lead against Finland in the other group match played simultaneously and Denmark rode the red wave to finish with a flourish.

Christensen latched on to a clearance to smash an unstoppable shot past Safonov from 25 metres before Maehle fired home his side’s fourth to make absolutely sure of a reaching the knockout phase for the first time since 2004.

Despite losing their opening two games in the wake of Eriksen’s cardiac arrest in the opener against Finland, Denmark went through as runners-up from Group B and will face Wales next.