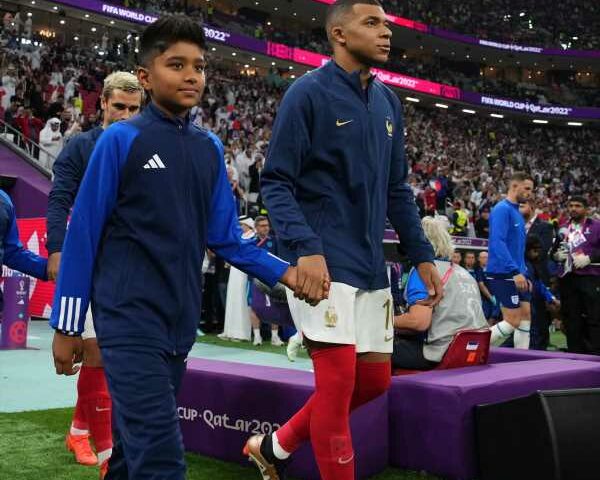 ‘Historically, Qatar has done wonders as I don’t think this will ever be possible with the new format of the World Cup.’

The FIFA World Cup Qatar 2022 turned out to be the best so far. The organisers made sure that the footballing extravaganza would be remembered by fans for the rest of their lives.

The tournament was held in one city. With FIFA’s decision to extend from 32 to 48 teams from the 2026 edition of the World Cup, it will be impossible to organise another one-city tournament in future, for that matter probably near to impossible in one country alone.

What the fans experienced in Qatar will never be experienced ever again. Fans were able to watch 2-3 World Cup matches on the same day.

Zach Joseph, Senior Venue Operations Manager at the Supreme Committee for Delivery and Legacy at the 2022 FIFA World Cup, tells Laxmi Negi/Rediff.com how the England versus France quarter-final encounter will be remembered by his family for a long time.

It was during this match that his son Jozef walked out with France superstar Kylian Mbappe and his daughter Amiee escorted England’s Jordan Herderson for the national anthems before the kick-off.

Joseph, who hails from Kottayam in Kerala, reveals that his son predicted before the tournament that France would win, while his daughter supported Japan. Meanwhile, Joseph believed that Brazil would win it for the sixth time.

As the family argued about their favourite football teams, Joseph gives us a sneak peak into his nine-yea journey in Qatar, where he played a key role in bringing the World Cup to fans all over the world. Most fans want to be a part of the World Cup, but for real die-hard football fans, the Qatar 2022 World Cup was an unbelievable opportunity to watch as many matches as possible. My family watched 14 matches out of 64 in the World Cup in Doha.

When you look at the 2018 Russia World Cup, on an average, fans in Moscow must have watched maximum 2 matches in a week, but in Qatar it was possible to watch at least 10 matches in a week if you were able to buy the tickets.

The road and metro rail networks were constructed especially for the World Cup and because of that many could multiple matches at stadiums on the same day. The investment into the road and metro infrastructure, of course, will remain as legacy post World Cup for the country.

I have been a part of the last five World Cups in some sort of role or the other. My first -ever FIFA World Cup match was in Munich in 2006 between Brazil and Australia. I was a student at that time doing the FIFA master management course in Switzerland and we were invited to the match.

For the 2010 South Africa I travelled to Johannesburg and Durban with my wife. For the 2014 Brazil World Cup, I was part of the observer group and also got invited by one of the sponsors for the final in Rio de Janeiro.

In 2018, I was sent on an official working role as assistant venue manager to Kaliningrad, Russia for 7-8 weeks. I took the opportunity to travel to other Russian cities — Moscow, St Petersburg, Kazan and Sochi as well — during the 2018 World Cup.

I have been employed since January 2014 by the Supreme Committee for Delivery and Legacy, which is responsible for the delivery of the required infrastructure (stadiums, roads, metro, accommodation etc) for Qatar to host the 2022 FIFA World Cup.

I was officially hired as Venue Operations Manager for Stadium 974. But, once I reached Doha, I was 1also handed responsibility for the Al Bayt stadium (which was the opening match stadium) and the Khalifa International Stadium.

In Qatar, working with a team which built seven of the eight stadiums from scratch was once in a life time opportunity. Until now the World Cup was hosted by a number of cities in much larger countries. Now, since FIFA has confirmed that the next World Cup will extend from 32 teams to 48 teams, it will be impossible to host it in a single city in future.

Historically, Qatar has done wonders as I don’t think this will ever be possible with the new format of the World Cup.

One of the major concerns was how to manage the estimated expected one million fans in a single city. Stadiums were all built with all modern amenities, latest technologies and were world-class, but when it came to air and ground transport movements, accommodation etc were the topics under discussions during the planning phases.

As some fans decided to make day trips from cities such as Dubai, Muscat etc and also thousands of fans from Saudi Arabia chose to drive through the land border, the pressure on accommodation and transport demand especially during the first 13 days of the group stages of the tournament was significantly reduced.

The first 13 days were the most challenging, as four matches were played in a day with fans able to watch 2 matches or sometimes even 3 matches on the same day.

All stadiums in Qatar were designed taking into consideration accessibility for everyone, amenities such as special toilets for families with kids, latest audio and broadcast and information technology systems etc.

Stadiums were all mostly full capacity for most of the matches. The decision was to close all schools during the tournament, 80 per cent of offices adopting work from home and this provided added comfort of less traffic and non World Cup related movements in the city.

The stadiums are state of the art, fully accessible for all. Stadium were also built with outdoor cooling systems taking into consideration the legacy aspects of use of stadiumS during the summer months when the temperatures are high.

As we all have to adapt with technology advances, we also had the FIFA plus app, which enabled fans at the stadium to scan the field of play on their phones and see information such as player’s profile and view player’s stats live.

Qatar has been awarded the AFC Asian Cup which will be held in 12 months’ time and also the 2030 Asian Games. So I am sure the stadiums will be kept in full use in the coming years.

Favourite moments from the World Cup As I was initially assigned to the venue operations role at the Al Bayt stadium in 2014, being part of a venue which had the opening ceremony was special. It was a spectacular opening ceremony in a very unique stadium designed from the outside and inside representing a traditional Arabic tent.

Seeing the opening ceremony and match kick off where I was working for the last nine years was surreal.

On a personal level, there was also the England versus France quarter-final game, where my son walked out with Kylian Mbappe and daughter with England’s Jordan Henderson. So it was a great experience for the entire family.

But if I have to rate just one, then it has to be the opening ceremony at the Al Bayt stadium.

If I am allowed another favourite moment, it was the France versus Morocco semi final, with 50,000 passionate Moroccan fans supporting their team.