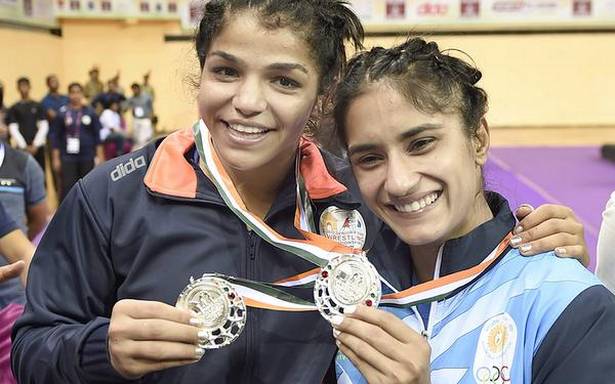 “Vinesh is very strong — both mentally as well as in wrestling. We have performed together and stayed together,” Sakshi, who will be part of Sony Sports live studio show, Sports Extraa, for the 2020 Tokyo Olympic Games starting from today, told The Hindu.

“In the last Olympics, we went 14-15 days prior to the Games. Vinesh, who competed in 48kg, used to weigh around 54-55kg and came down to 48kg with a lot of difficulty. She was my roommate. I saw her having only 200ml of water a day for three days to compete in the Olympics. She won her first bout but got injured in the second bout against China.

“I have not seen a mentally strong wrestler like her. We also reduce weight but we take it easy, have salad or drink more water. But I have seen Vinesh going through a lot of struggle,” said Sakshi.

“In Rio, Vinesh was a medal prospect as well. Now she is much stronger and World No.1. I am very confident about her.”

Sakshi said Vinesh (53kg), Bajrang (65kg), Ravi Dahiya (57kg) and Deepak Punia (86kg), who qualified through the 2019 World championships, would be medal contenders. “If I have to pick two, then Vinesh and Bajrang have a better chance because of their experience.”

Sakshi had a word of advice for the youngsters, including Sonam who beat her in the selection trials.

“For Anshu (57kg), Sonam (62kg) and Seema (50kg), this is the first Olympics. They have less experience at the highest level… If they fight without fear, they can win medals.

“For me, Rio was my first Olympics but I did not fear anything. I also had less experience at the senior level. I gave my 100 per cent without any fear. I will suggest the same to them. A big platform is there for you and the whole of India is expecting good things from you,” said Sakshi, who won her medal in 58kg.

(Watch the 2020 Tokyo Olympic Games live on Sony Ten 2 and Sony Six channels in English, on Sony Ten 3 in Hindi and Sony Ten 4 in Tamil and Telugu)