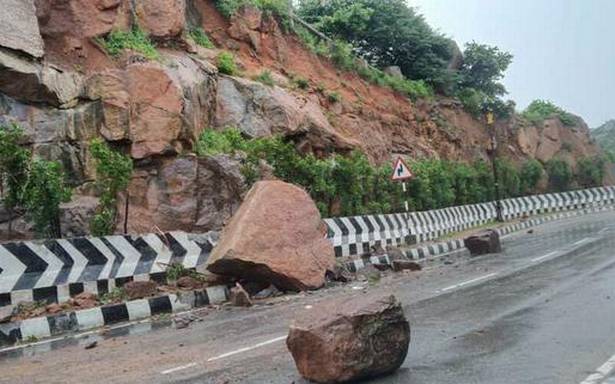 No injuries as the incident happened around 7 a.m.

Following days of incessant rain in the region, boulders and a few stones broke off the Yadagirigutta hillock and came rolling down on Thursday.

The incident, local police said, occurred on the newly-laid ghat road to the hill shrine of Sri Lakshmi Narasimha Swamy at around 7 a.m. As there was no major activity at that time, there were no injuries to people or damage to property.

Pictures circulated from the site showed boulders and the debris strewn on the road, and a few auto-rickshaws were still using the path.

Yadagirigutta police said that the road was blocked for commuters, and temple officials were alerted for works to clear the way. They said free movement of devotees and vehicular traffic were not affected as they were diverted to the old and the first ghat route.