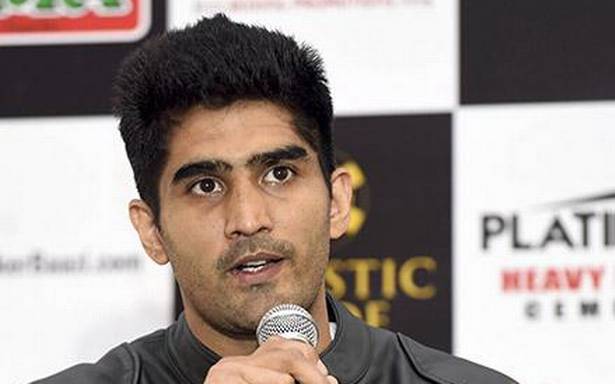 Olympics and World championships medallist boxer Vijender Singh has highlighted the concern of some famous former athletes, who have been employed with Haryana Police for several years.

Vijender, who has taken to social media to raise the issue, said these athletes should be treated with respect.

“On one hand you are promoting ‘Cheer For India’ and on the other hand you are not giving them promotions. They were stars at the peak of their careers. They should get what they deserve,” said Vijender.

“They fulfil all terms and conditions. Someone like (hockey player) Mamta Kharab was appointed in 2007 and (wrestler) Geetika Jakhar in 2008 but they have not got promotions yet.

“In Punjab, (shooter) Harveen Srao and (hockey player) Jugraj Singh have been promoted. It’s about respecting an athlete who has performed at the highest level,” said Vijender.

Nine sportspersons, most of them Arjuna award winners, were appointed as Deputy Superintendents of Police between 2007 and 2010.

Olympic medallists Vijender and Yogeshwar Dutt and hockey player Sandeep Singh, who is now a minister in the Haryana government, were also in the list until they resigned from their jobs to join politics.

“Most of them were employed with the Railways and other top organisations before switching jobs and would have reached higher ranks (had they continued) today,” said Vijender, adding that such apathy would only discourage up-and-coming athletes.