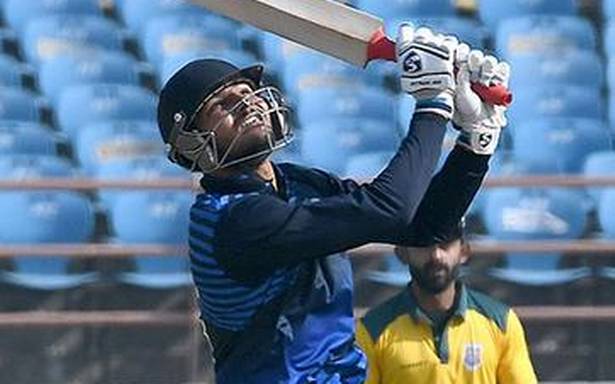 Vidarbha’s batting comes a cropper with the exception of Apoorv

Saurashtra cruised to a seven-wicket win over Vidarbha in the quarterfinals of the Vijay Hazare Trophy thanks to disciplined efforts from its seam bowlers here on Wednesday.

Electing to field, led by skipper Jaydev Unadkat, the Saurashtra pacers kept picking wickets and ran through the Vidarbha batting order easily to bowl them out for just 150.

Skipper Faiz Fazal held fort at one end and stitched a small partnership with Akshay Wadkar for the fourth wicket.

Medium-pacer Mankad however gave the breakthrough removing Wadkar playing on to his stumps. Soon, Fazal too fell when he chased a wide one from Chirag Jani and edged it to the slip fielder undoing all the hard work he had done to leave Vidarbha tottering at 66-5.

Then left-arm spinner Dharmendrasinh Jadeja struck twice off successive deliveries to reduce Vidarbha to 86 for eight.

Wankhede then turned the heat on as he went after the spinners Jadeja and leg-spinner Yuvraj Chudasama. He was particularly severe against Jadeja, hitting him for four sixes and a boundary as he raced to his half-century before eventually being dismissed by Chudasama.

Defending a paltry total, Vidarbha started promisingly with pacer Aditya Thakare removing the openers quickly. When Jackson fell, Saurashtra was in trouble at 35 for three before Mankad and Vasavada took charge.

Vasavada started with three boundaries off Lalit Yadav through the off-side with beautiful drives and a late-cut. Soon Mankad joined the party, going after Lalit picking three boundaries in an over and attacking the spinners with ease to seal the chase.