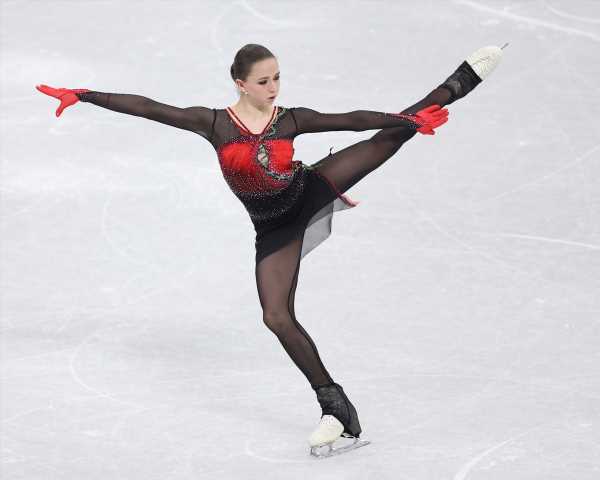 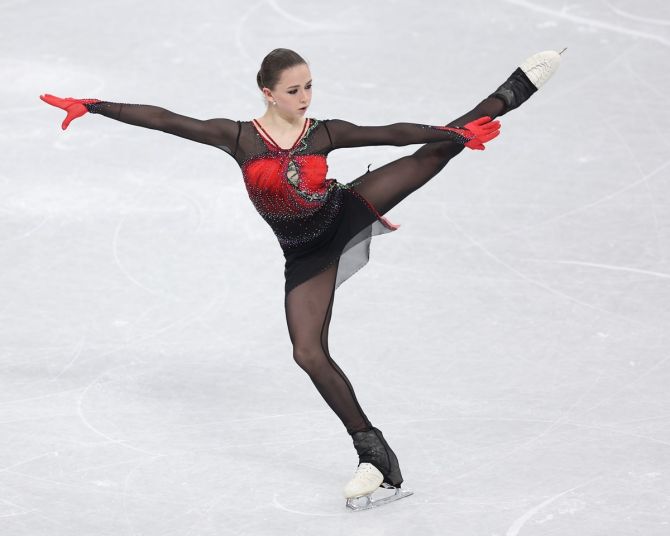 The 15-year-old’s gold medal and Games future now hangs in the balance as the International Olympic Committee (IOC) attempts to draw a line in the sand over Russian doping.

The pint-sized skater is one of the youngest Olympic athletes to test positive for a banned substance and many fans around the world expressed outrage over how she came to have a banned angina drug in her system.

“It is a shame, and the responsible adults should be banned from the sport forever!!!” German figure-skating great Katarina Witt posted on Facebook. “What they knowingly did to her, if true, cannot be surpassed in inhumanity and makes my athlete’s heart cry infinitely.”

Russian athletes are competing in Beijing without their flag and national anthem because of sanctions against Russia for previous violations. Russia has acknowledged some shortcomings in its implementation of anti-doping rules, but denies running a state-sponsored doping programme.

A defiant Kremlin on Friday said it was convinced Valieva’s positive drug test was a ‘misunderstanding’.

“Hold your head up, you’re a Russian,” Moscow’s spokesman Dmitry Peskov urged Valieva in a conference call with reporters. “Go proudly and beat everyone.”

Valieva delivered one of the Winter Games highlights when she landed the first quadruple jumps by a woman in Olympic competition on Monday.

Her Olympic dream, however, turned into a nightmare on Friday when the ITA revealed publicly that she had tested positive for banned angina drug Trimetazidine in a urine sample collected by Russian authorities at the national championships in St Petersburg on Dec 25.

The testing lab in Stockholm, Sweden reported on Tuesday that her sample was positive, the day after she wowed the world with her unique quadruple jumps and helped win the gold for her team, who are competing as the Russian Olympic Committee (ROC).

It was not immediately clear why there was such a delay between her test and the result, which allowed her to travel to Beijing and take part in the first of her two events.

The IOC said the handling of this case was initially with the Russian testing authorities and then with the World Anti-Doping Agency (WADA) accredited lab in Sweden.

The Russian Anti-Doping Agency (RUSADA) did not respond to Reuters inquiries.

Russian Olympic Committee president Stanislav Pozdnyakov raised doubts on Friday about how the testing was handled.

Pozdnyakov said that Valieva’s positive doping test may have been deliberately held back to coincide with the end of the team competition, TASS reported.

He said the long gap between the Dec. 25 doping test and the Feb. 8 announcement looked suspicious and he had “serious questions about the process”.

Earlier, the Russian Olympic Committee said it was taking comprehensive measures to protect its athletes and to keep a gold medal won ‘honestly’.

It said that Valieva’s tests were negative before and after Dec. 25.

RUSADA imposed a provisional suspension on Valieva after Tuesday’s result. She appealed a day later and her ban was lifted. The Russians did not disclose publicly the reason for removing the ban.

Now, the IOC, the International Skating Union (ISU) and WADA have said they will ask the Court of Arbitration for Sport (CAS) to overturn the Russian decision to lift her ban. CAS on Friday said it had not yet received the appeal.

“We have a 100 percent policy against doping,” IOC spokesman Mark Adams said in a press conference on Friday.

He added the IOC had demanded that a decision be made before Valieva is due to compete again on Tuesday in the women’s singles. Under the rules of the draw, the ROC cannot replace Valieva in singles competition because she has already competed in the team event.

“We need to expedite this as quickly as possible for all those concerned,” Adams said.

Valieva, wearing a navy hoodie and black tights under padded shorts, skated in practice on Friday afternoon with her team mates Anna Scherbakova and Alexandra Trusova, as well as Russian-born Anastasia Gubanova, who represents Georgia.

For days, a doping cloud has hung over the Russian teenager and the Olympics. Russian media first reported that Valieva had tested positive on Wednesday.

The medal ceremony for the team event has been delayed since Tuesday, with Team USA and Japan waiting in the wings for their prizes.

America’s top anti-doper Travis Tygart, who unravelled the Lance Armstrong doping operation, expressed sympathy for Valieva, but said the U.S. could use new laws to prosecute those around her.

“Clean athletes deserve better, and this poor young woman deserves better,” Tygart, the head of the U.S. Anti Doping Agency (USADA), told Reuters on Friday. “She’s getting chewed up (for doping) on top of being abused by the Russian state system.”

The United States could prosecute the Russians involved in Valieva’s doping case under the American Rodchenkov Act (RADA).

The RADA bill was signed into U.S. law in 2020 and empowers American prosecutors to seek fines of up to $1 million and jail terms of up to 10 years, even for non-Americans, if actions have affected American athletes’ results.