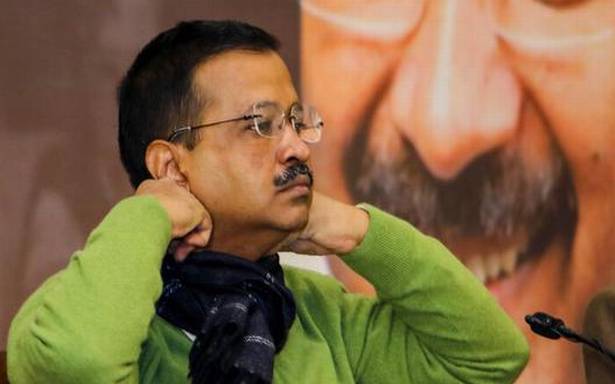 Every government has looted Goa since 1961, says AAP chief

The priority of the BJP government in Goa was only to cater to VIPs, AAP national convenor and Delhi Chief Minister Arvind Kejriwal said on February 11, alleging that a helipad for Prime Minister Narendra Modi ahead of his rally had come up within 24 hours but a bus stand adjacent to it had not been finished even after 20 years.

Speaking in Goa on the last day of poll campaign, Mr. Kejriwal appealed to the electorate not to split votes while exercising their franchise on February 14 by choosing non-BJP parties such as the Congress, the Goa Forward Party (GFP) and others.

Commenting on the Prime Minister’s mega rally held on Thursday in Mapusa in North Goa, the Delhi Chief Minister said, “While the PM’s helipad came up within 24 hours, a bus stand next to it could not come up in 20 years. It just shows that if a government has the will, it can do anything. Unfortunately, the Goa BJP government’s priority is only to cater to VIPs.”

Assuring the Goan people that they were the VIPs for the AAP, Mr. Kejriwal promised that his party would build roads and bus stands in the State at the same speed with which the Prime Minister’s helipad was constructed by the current BJP government.

Remarking that the February 14 Goa Assembly election was “no ordinary election,” but one that could change Goa’s present and future, the AAP leader appealed to people to give his party a chance to improve the State.

“Today I want to appeal to Goans…you have voted for the Congress and the BJP for 27 years and 15 years respectively, but these parties have not done anything for the people. Today, Goa’s health and education services are collapsing, the roads are damaged, there are water and electricity problems, the youth are unemployed. Things will be as they are for the next five years as well if you vote for these parties. They will just loot Goa,” he said, remarking that all governments after 1961 (Goa’s Liberation from the Portuguese) had done nothing but plunder the State.

Alluding to the success of the AAP’s ‘Delhi model’, Mr. Kejriwal claimed that the people of Delhi had today completely rejected both the BJP and the Congress and were electing his party as they were happy with the AAP’s work in Delhi.

“Give the AAP one chance to show its work in Goa…If we don’t do proper work, the Goan electorate is free to throw us out after five years and I will never come to seek their votes again,” Mr. Kejriwal said.

“Today, Goa has been saddled by a ₹24,000 crore debt burden, which will only increase to ₹50,000 crore and ₹1 lakh crore if the BJP or the Congress returns to power,” he said.

He exhorted people not to waste their vote by giving it to the Congress or other parties because it was akin to voting for the BJP as all the MLAs of the Opposition parties eventually entered the saffron fold.

“If you want to defeat the BJP, and are fed up of its misgovernance and divisive ideology, then give your vote to the AAP instead of dividing votes,” Mr. Kejriwal said.