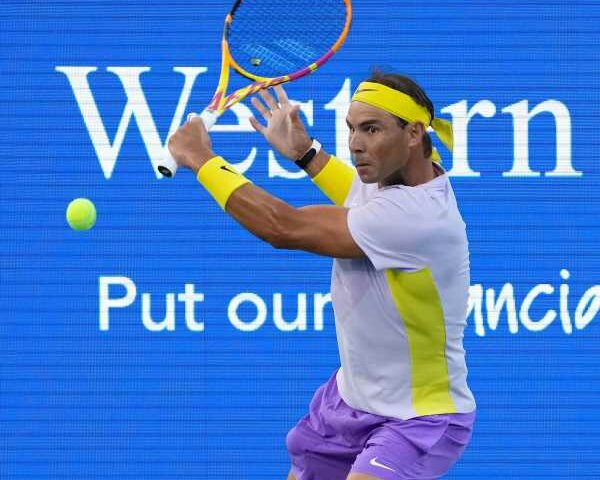 ‘He’s doing something that no one has ever done before.’

Rafael Nadal returns to the US Open for the first time in three years short of match practice and with big question marks about his fitness but few people will dismiss the Spaniard’s chances of claiming a record-extending 23rd Grand Slam title.

The 36-year-old Mallorcan went in to Wimbledon still on course for a calendar year Grand Slam but an abdominal injury forced him to pull out of his semi-final against Nick Kyrgios.

His return has been sketchy and the only clue to his form and condition was his loss to Croatia’s Borna Coric in his opening match at Cincinnati in which Nadal looked understandably rusty.

It was a similar story before this year’s Australian Open. Nadal arrived in Melbourne having not played a competitive match for five months but then went on a 20-match winning spree, a run that included claiming the Australian Open title by beating Danil Medvedev from two sets down in the final.

So if anyone can defy tennis logic, Nadal can.

The big question, however, will be whether or not his body will hold up on the unforgiving Flushing Meadows concrete.

A chronic foot injury that can flare up without warning means Nadal never really knows whether or not he will be fit for battle from one day to the next — a situation seven-time major winner Mats Wilander says must be hard to handle.

“He’s doing something that no one has ever done before which is waking up in the morning not knowing if I’m going to be able to play or walk or if I’m going home tomorrow,” Wilander, who will be working for Eurosport, said when previewing the event.

“That’s very different. I don’t really understand a player that can do that. I admire him for that more than I admire him for winning 14 Roland Garros titles, the fact that he’s willing and able to do what he’s doing at his age.” By the time the US Open starts on Monday, Nadal will be poised to reclaim the top spot for the first time since February 2020 as he has no points to defend and will be favourite to stay there until the end of the year if the injury curse does not strike again.

“He is in a great position to do that, which is amazing considering that he didn’t play for six months before that,” former world number one John McEnroe told Eurosport.

“Rafa does things that you can’t believe that it happened, which is why he’s considered the best and up there with the all-time greatest players — you never know what to expect.”

McEnroe also warned against reading too much into Nadal’s early loss in Cincinnati.

“You know that what he cares about is the U.S. Open. With all due respect to Cincinnati, he wasn’t too worried about that so at least he got on the court again,” the American said.