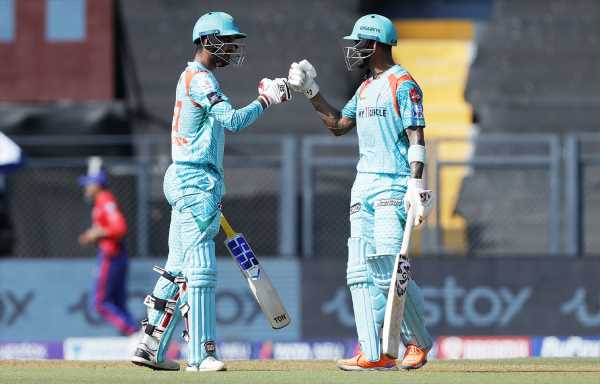 Captaincy seems to be working well for K L Rahul, who looks all set to steer Lucknow Super Giants to the play-offs in their debut IPL season.

A clinical Lucknow Super Giants outclassed the Delhi Capitals with both bat and ball to jump to second in the IPL standings, with seven wins from 10 games, behind another debutant Gujarat Titans (8 wins from 9 games).

‘I was disappointed and fuming at the end of the first innings. Stupid cricket with the bat,’ Rahul said after Lucknow’s last match against the Punjab Kings on Friday despite winning by 20 runs.

And it was Rahul, who shouldered the responsibility with the bat against Delhi Capitals, to ensure his team didn’t repeat the ‘stupid mistakes’.

After the early departure of Quinton de Kock (23), Rahul got the Lucknow innings back on track, putting 95 runs from 61 balls for the second wicket with Deepak Hooda.

Rahul, who got a lifeline on 14 when Lalit Yadav put down a tough chance off his bowling, started off slowly. He got going by hitting part-time spinner Lalit for a six and four in the fourth over, but for the most part of his partnership with Hooda, he was content to play second fiddle.

Hooda, who has been promoted to No 3, started off with a streaky boundary as he edged Shardul Thakur through the vacant slip region but treated the crowd to a few cracking boundaries after that. He was particularly severe on the Delhi spinners, going after Axar Patel and Kuldeep Yadav with regular boundaries in the middle overs.

The in-form Kuldeep was hit for a big six by Rahul to raise the 50-run stand for the second wicket, with Lucknow well-placed on 94/1 in 10 overs at the halfway stage.

The duo did well to ensure that they hit at least a boundary in every over to keep up the momentum in the middle overs. Rahul raced to his fifty from 35 balls in the 13th over and Hooda reached the landmark off 32 balls in the next over.

Hooda’s brave knock ended in tame fashion as he chipped a full delivery back to Thakur in the 15th over, to perish after a quickfire 52 from 34 balls.

Along with Rahul, he had put Lucknow on course for a 200-plus total. Rahul went on to smash 77 from 51 balls before he fell in the 19th over.

Delhi made a good comeback in the last few overs to keep Lucknow under the 200 run mark, but their batters failed to overhaul the target on a good batting as they suffered a six run defeat.