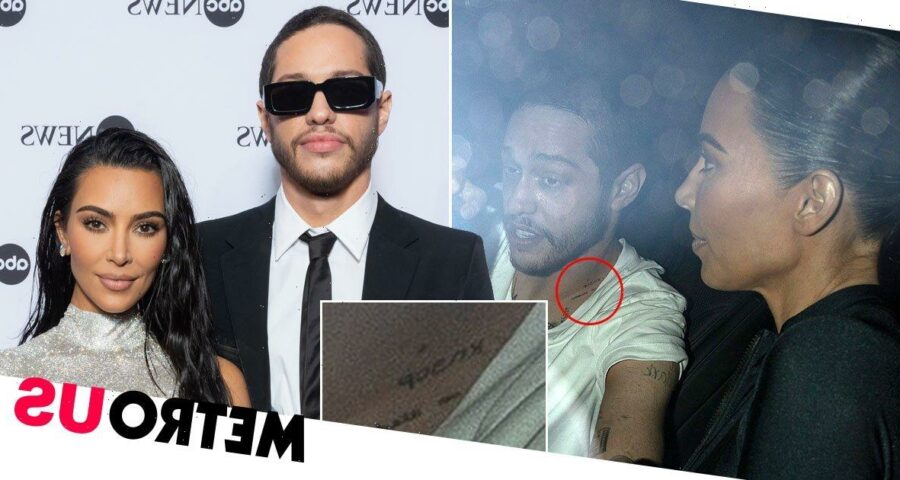 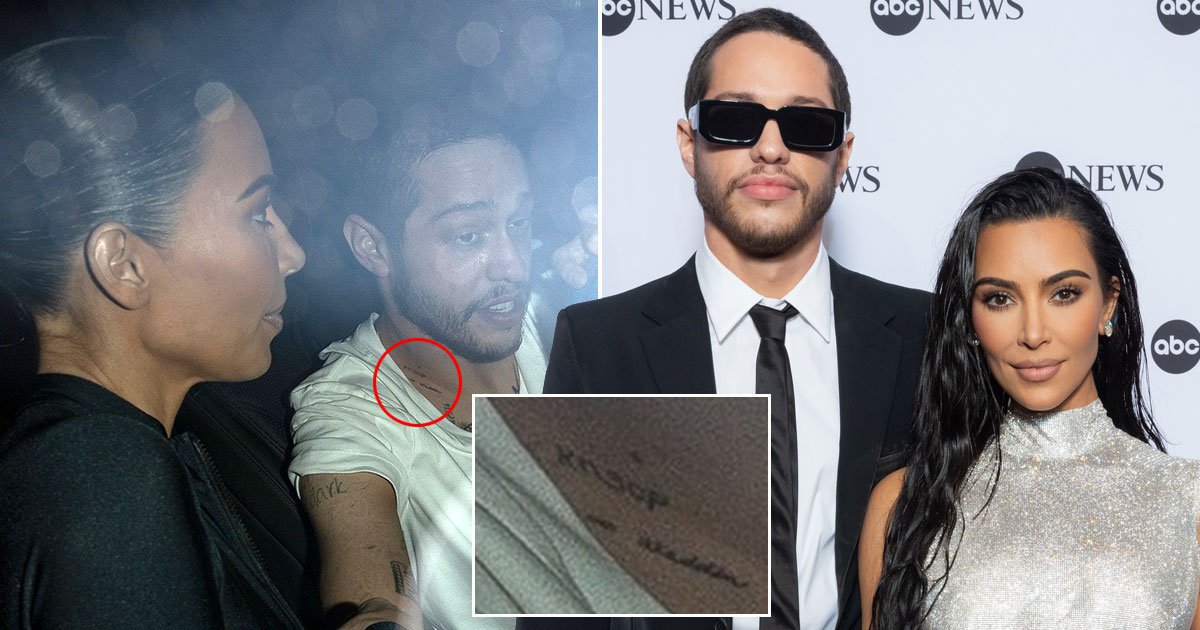 Pete Davidson appears to have a new tattoo dedicated to girlfriend Kim Kardashian’s children, but the internet can’t agree whether it’s a thumbs up or down.

The Saturday Night Live comedian performed his first stand-up show in three years at the Netflix Is A Joke: The Festival in Los Angeles on Friday night.

He was joined by Kim, 41, who supportively watched the comic return to the stage and make jokes about her estranged husband Kanye West.

While leaving and getting into their waiting car, Pete, 28, seemed to be sporting a previously unseen tattoo on his neck.

Inked in tiny font, the initials ‘KNSCP’ were seen just below his right jaw sparking speculation that it refers to Kim and her four children, North, eight, Saint, six, Chicago, four, and Psalm, two, as the letters appear in age order.

If it is indeed a tribute to Kim’s brood, it’s not known exactly when Pete met them for the first time or even how close they are, as Kanye publicly expressed his disapproval of the comedian having a relationship with his children amid his divorce from the reality star.

However, Pete was pictured spending bonding time with Kim and Kanye’s eldest child North, with the youngster seen sitting beside him as he drove an electric Moke car at Scott Disick’s home in early April.

It was reported that Chicago, Saint and Psalm were also there that day and met Pete.

Commentary on social media has been divided about Pete’s alleged tribute to the kids, with one Twitter user weighing in: ‘I’m starting to believe Pete enjoys poking at Kanye!’

Another agreed: ‘If this is true in regards to that new tattoo, it’s saying more about Pete & Kim than it does Kanye. That’s for sure. Let’s hope that Kanye stay strong, stay cool, & stay focus. As long as those children is good & safe; that’s all that should matter in my opinion.’

‘Agreed disrespectful. pete and kim have been dating 7 months and during the whole duration on their relationship kanye has made it very clear he doesn’t like pete.. feels like pete is pushing his buttons and if it’s not that pete must be obsessed with kim cause multiple tattoos?’ another nay-sayer tweeted.

One predicted: ‘I’ll be waiting for Kanye’s rant about this shortly.’

However, others didn’t see the big deal with the tribute, with one commenting: ‘Tattoos are permanent and it’s a very big gesture to make because essentially he’s committing himself to them. I personally see nothing wrong with it. I can understand how Kanye would feel but I don’t think Pete deserves the backlash.’

One other agreed: ‘What a nice gesture from Pete Davidson’s side. He is actively trying to be a part of Kim and her kids’ life.’

It’s not the first tattoo Pete has dedicated to his relationship with Kim, as he also has ‘my girl is a lawyer’ tattooed on his arm.

Speaking to Ellen DeGeneres about the tat, the Skims boss recently said: ‘The branding is my name. The other ones are cutesy things. I think my favourite one, it says: “My Girl Is A Lawyer.” And that one’s really cute.

‘I just think he was like, “I want something that’s there that I can’t get rid of, [like] my tattoos”. He’s in the process of getting rid of his arm tats and his neck tats. He’s like, “I don’t want to be able to get rid of it or to cover it up. I just want it there as a scar on me”.’

The couple have been going strong since they began dating in October, and made their red carpet debut at a White House dinner on Saturday, looking loved-up as per.