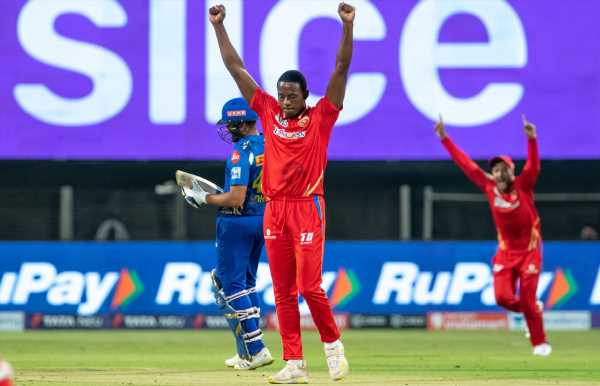 Mumbai Indians continued their winless run in IPL 2022 as they suffered a 12-run defeat at the hands of Punjab Kings at the MCA international stadium in Pune on Wednesday.

Put into bat, Punjab Kings’s aggressive approach saw them amass 198/5 in their 20 overs. Mumbai Indians faltered at the end as they finished on 186/9, their fifth defeat in a row in IPL 2022.

The target of 199 was within Mumbai’s reach on a good wicket. Captain Rohit Sharma gave the five-time IPL champions a flying start as he hit three fours and a six in his first 10 balls faced.

Ro looked in the mood to shred the Punjab attack to pieces as smashed Kagiso Rabada over the cover fence for a six. However, the South African had the last laugh as he struck with the big wicket.

The MI captain looked be caught in two minds as he tried to pull Rabada, but ended up getting a top edge which was taken by on the leg side.

Ro looked desperate to make the difference with the bat for his team, but could only score 28 from 17 balls. That wicket halted MI’s momentum in the Powerplay and things only got worse when Ishan Kishan fell in the next over, to Vaibhav Arora.

18-year-old South African dasher Dewald Brevis revived MI’s hopes in the middle with an entertaining 49 from 25 balls, which included four sixes in a row off leg-spinner Rahul Chahar in the ninth over.

After Dewald’s departure, the experienced Suryakumar Yadav looked to have things under control as he kept producing the boundaries at regular intervals.

Kieron Pollard’s run out was a setback, but SKY kept his team’s hopes alive as he slammed pacer Arora for back to back sixes in the 17th over.

With 28 needed from 12 balls, MI looked towards SKY to guide them home. He started the 19th over with a boundary hitting the full toss from Rabada behind square on the leg side.

But Rabada kept his composure in a pressure situation, as he dismissed SKY off the fourth ball of the over; the MI right-hander hit a full toss straight to Odean Smith at long-on.

Rabada’s figures might read 2/29 in four overs, but it were his two big strikes of Rohit and Suryakumar at crucial junctures, which turned the game in Punjab’s favour.