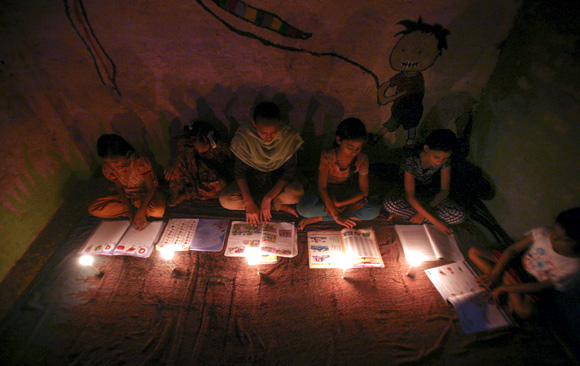 ‘We are planning load shedding in such a way that the entire state will not suffer.’

The Maharashtra State Electricity Distribution Company — MSEDCL — has announced load shedding in rural and urban areas of the state owing to shortage of coal and unavailability of enough water to produce hydro power even as the gap between demand and supply soared to 2,500 MW with soaring temperatures.

Prasanna D Zore/Rediff.com spoke to Maharashtra’s Energy Minister Dr Nitin Raut to find out the reasons behind the increasing gap between demand and supply in the state and the measures the state government plans to undertake to improve the situation.

Why is Maharashtra facing power cuts this summer?

It is just not Maharashtra. Many other states like Gujarat and Andhra Pradesh are going for power cuts to industrial and residential consumers due to sharp rise in demand and simultaneous shortage of coal availability.

There is a coal crisis in India right now due to poor management of coal supply from producing states and mining. We have been facing shortage of coal since last September and the situation has still not improved.

Whatever coal is available (within India) cannot be transported because we do not have enough transportation rakes. Given this situation we are not able to produce enough power.

What measures is the state government undertaking to meet the rising demand from power consumers in the state?

We are trying to produce more power from the Koyna Hydro Power Project (at full capacity Koyna produces 1900 MW of power) but there too we have water constraints.

We have been running Koyna Hydro Electric Power Plant at full capacity since last four-five months after the central government asked us to produce more hydro power.

Now, there is only 17 TMC water available in the reservoir enough to last only for 17 days. If we request them (the Koyna Hydro Power Project officials) they can spare only 3 TMC water more to produce power. But after that we will have to find ways to produce power through thermal power plants.

Why can’t we import coal from outside India?

The Union power and coal ministers are discussing this issue. I am sure the Centre will find a solution to deal with the coal shortage in India.

Who is responsible for the mismanagement of power supply in Maharashtra? We did not face power cuts for quite some time now. What has changed?

There have always been power cuts in Maharashtra during peak summer.

The heat wave in the state, particularly in the Vidarbha region is intense and many parts in the state including Vidarbha are witnessing temperatures in the range of 45 degrees to 48 degrees Celsius.

During peak summers Maharashtra’s power demand is 30,000 MW per day and we are already producing 28,700 MW per day.

The shortfall in the state fluctuates between 1,500 MW to 2,500 MW depending on demand for power from consumers.

Post lifting of COVID-19 restrictions economic activities have resumed fully and that too is adding to the soaring demand.

Do you think nuclear power plants like the one proposed at Jaitapur in Ratnagiri could help India secure its energy needs in the future?

That is a political issue and nothing can move on this front without people’s consent and participation. Right now, the state government is also focusing on producing more power through renewable energy.

Talking about the measures undertaken by the state government to improve the energy situation in Maharashtra you will soon see us unveiling a new RE (renewable energy) policy in the coming cabinet meeting.

In the RE policy 2020 there weren’t enough benefits and incentives for trading companies. In the new RE policy we will be giving a red carpet treatment to the trading companies. Our policy will attract lot of bidders to invest in Maharashtra and produce green energy and generate employment.

What was the situation a month ago and what has changed now?

It is not that entire Maharashtra will be shut down. We are planning the load shedding in the state in such a way that the entire state will not suffer.

How soon is the power situation likely to improve in Maharashtra?

It depends upon the production, which in turn, depends upon clearing of coal supply bottlenecks. We depend on the Union government to ensure smooth mining and supply of coal across the country.

Once enough coal is available, our thermal power plants can work full steam and help improve the electricity production in India.

We are facing a financial crunch in the state. Till now the state government has not paid dues worth Rs 9,000 crore (Rs 90 billion) to the rural and urban development ministry.