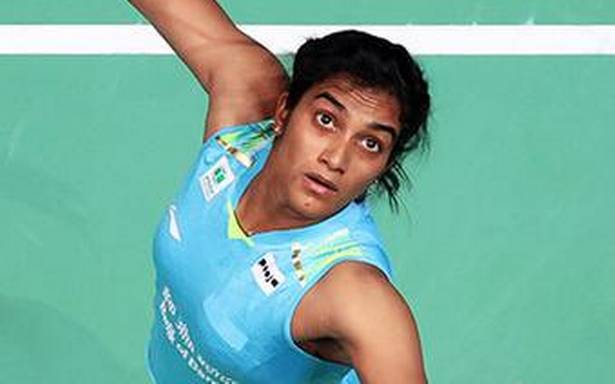 The World champion has to beat the likes of Tai, Yamaguchi and Chen en route to realise gold

World champion P.V. Sindhu returns to the Olympic arena determined to do one better than her runner-up performance in 2016.

Though the men’s 13th seed B. Sai Praneeth and the unseeded duo of Satwiksairaj Rankireddy and Chirag Shetty will also be around, the quality of opposition they are drawn to face could prove too much for them to handle.

In the absence of defending champion Carolina Marin, Sindhu and other medal contenders can breathe a bit easy. Nevertheless, the journey to the podium is going to be tough.

After the two-match preliminary league, Sindhu’s first serious challenger could be Mia Blichfeldt (Denmark) in the elimination round. Sindhu has a 4-1 record against Mia. This year, it is 1-1.

Thereafter, Sindhu’s prospective rivals are World No. 1 Tai Tzu Ying (Chinese Taipie) in the quarterfinals, former World No. 1 Akane Yamaguchi (Japan) in the semifinals and top seed Chen Yufie (China) for the gold. Though these challengers appear intimidating, Sindhu knows she is treading a familiar path.

Tai holds a 13-5 advantage in their clashes but three of Sindhu’s victories have come in big-ticket events like the 2016 Rio Olympics, 2018 BWF World Tour Finals and the 2019 World Championship. Since then, Sindhu has lost thrice. Therefore, this could well be a make-or-break match.

Against Yamaguchi, Sindhu will be confident of improving on her 11-7 record, following a comeback-win in this year’s All England Championship. However, in familiar home conditions, Yamaguchi could prove tougher.

Since the Chinese have not played competitively since the pandemic set in, their form is unknown.

After losing the 2020 All England final to Tai, Chen returns as the seeding favourite. Sindhu holds a 6-4 record but Chen emerged triumphant in their last meeting in the 2019 BWF World Tour Finals.

Unless Sindhu reproduces the sublime form that brought her the world title, she could end up justifying her sixth seeding, in the quarterfinals. Praneeth, like Sindhu and Satwik-Chirag combination, is drawn to play the top seed Kenta Momota. Before the prospective quarterfinal against the Japanese, Praneeth will have to deal with eighth seed Ng Ka Long (Hong Kong).

Satwik and Chirag are unlikely to go beyond the league stage. Clubbed with the top seeded Indonesians Marcus Fernaldi Gedeon and Ken Sanjaya Sukamuljo, besides World No. 3 Lee Yang and Wang Chi-lin (Chinese Taipei) for company, the debutants can only hope to cause a flutter.