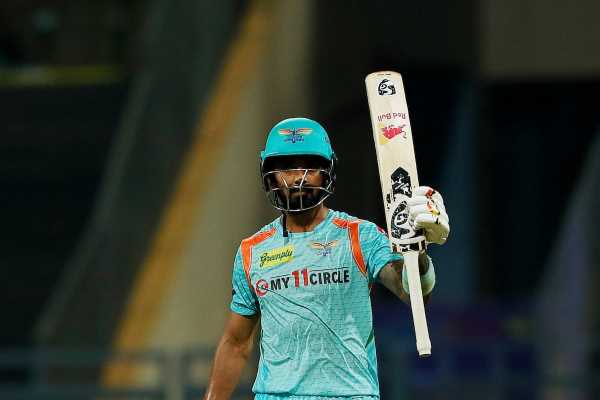 At first glance, K L Rahul’s individual contribution of 103* off 62 balls towards the Lucknow Super Giants’ cause against Mumbai Indians looks spectacular on its own merit. Compared to the fact that LSG posted 168 runs on the board reveals that Rahul contributed over 61% of the total.

Considering the numbers, one may confidently say that he single-handedly won the tie for Lucknow. The one true ‘Super Giant’.

Rahul started off slow, played good cricketing shots, built good partnerships along the way and then went on the offensive in the closing stages in a strategy that was seemingly well planned and in a single word — measured.

The match came into life in the third over of Lucknow’s innings when Rahul hit back to back fours off Daniel Sams. On to the next over and Lucknow lost their first wicket with Quinton de Kock’s dismissal for 10 off Jasprit Bumrah’s bowling. De Kock’s wicket triggered a lean period for Lucknow, one where the scoring rate dipped and both Rahul and Manish Pandey seemed content to rotate the strike and keep the scoreboard ticking.

The floodgates finally opened in the 9th over when Rahul finally began to aggressively go after Mumbai’s bowlers, smashing a huge six off Jaydev Unadkat

Onto the 10th over and Riley Meredith found himself at the receiving end as Rahul hammered two consecutive fours off the last two deliveries.

Bumrah was the next to be targeted as Rahul smashed him for four and also brought up his 50 in the same over.

Lucknow lost two quick wickets in succession as Manish and Marcus Stoinis fell in the 11th and 12th over respectively. Rahul, however, continued to find the boundary with relative ease.

Krunal Pandya and Deepak Hooda came and went; Rahul remained undeterred at the crease and continued to soldier on.

After hitting Bumrah for two fours in the 17th over, Rahul went one better in the 18th delivered by Unadkat — smashing three back to back fours off the last three balls.

His century, his third of the season, came in grand style after launching Meredith for six in the final over of the innings.

Needless to say, Rahul is in the form of his life at the moment and debutants Lucknow Super Giant are the worthy beneficiaries.