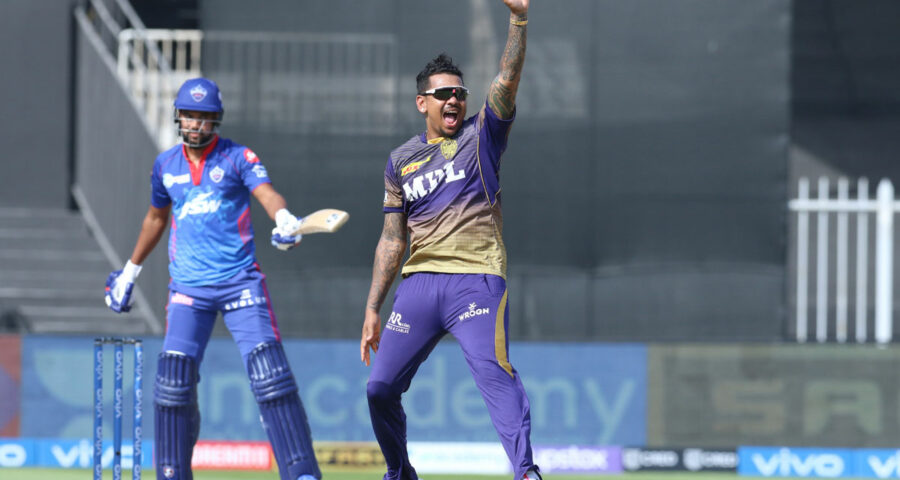 Sunil Narine was the hero with both bat and ball as Kolkata Knight Riders scored a three wicket win over Delhi Capitals and boosted their hopes of a place in the IPL play-offs in Sharjah on Tuesday, September 28, 2021.

Delhi Capitals were off to a steady start on a sluggish Sharjah wicket that was not easy for stroke-making. They could score just 39/1 in the six overs of Powerplay.

Narine, who was introduced in the seventh over, took just two deliveries to strike with in-form Shreyas Iyer’s key wicket. Iyer was done in completely by Narine’s guile as he played down the wrong line, was beaten by the off-break delivery and bowled for 1.

Narine and Varun Chakravarthy then spun a web around the Delhi Capitals batting line-up in the middle overs, drying up the runs to build up the pressure.

Narine ended his spell in the same fashion he had started. He foxed Lalit Yadav with one that went straight on after pitching to trap him plumb leg before and finish with excellent figures of 2 for 18 in four overs.

When KKR batted, Narine did the star turn with a cameo innings at a crucial juncture in the contest.

KKR needed 30 from the last five overs as Delhi brought back their main strike bowler, Kagiso Rabada, in the 16th over.

Rabada overstepped to concede a no-ball as Narine lofted the free hit delivery back over the bowler’s head for a couple of runs.

That no-ball seemed to have disrupted Rabada’s rhythm. He tried the short ball, which Narine swung hard and got the edge that went over fine leg for a six.

The next ball was the slower bouncer, which Narine pulled square on the leg side for a four. Rabada followed it up with a similar delivery and Narine pulled it over midwicket for a second six.

He took a single off the last ball to make it 21 runs from the over as Rabada had a rare off day with the ball.

Narine perished in the next over, caught in the covers off Anrich Nortje after a quickfire cameo of 21 from 10 balls, which helped KKR complete victory with 10 balls to spare.