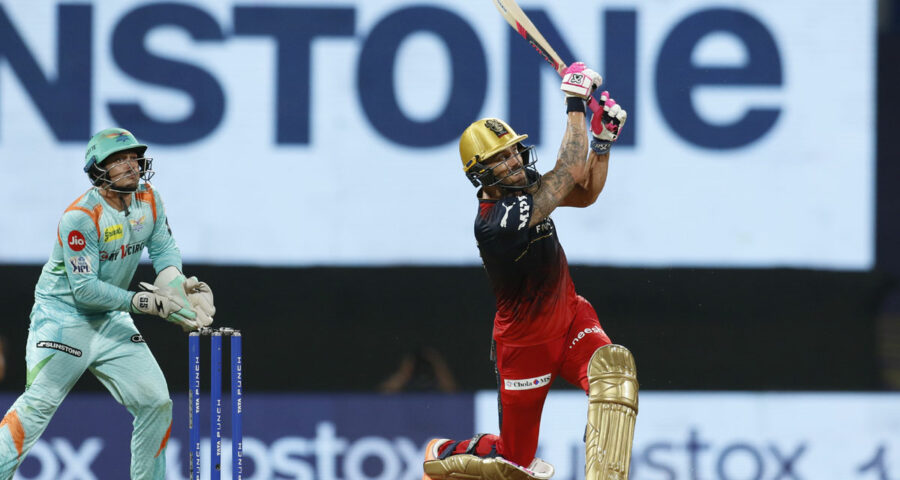 Faf du Plessis proved that he continues to be among the top-rated batters in T20 cricket as he steered the Royal Challengers Bangalore to a 18 run victory against the Lucknow Super Giants at the D Y Patil stadium in Navi Mumbai on Tuesday.

RCB signed the 38-year-old South African for Rs 7 crore (Rs 70 million) at the IPL auction and handed him the captaincy after Virat Kohli stepped down as skipper. The move seems to have worked well for RCB so far, with five wins from their first seven games.

Put into bat, RCB were rocked by early blows as Anuj Rawat and Virat Kohli were dismissed by Dushamantha Chameera in the first over.

Glenn Maxwell tried to hit his team out of trouble with a 10-ball 23 before he was brilliantly caught by Jason Holder off Krunal Pandya, while Suyash Prabhudessai’s dismissal saw RCB reeling on 62/4 in the eighth over.

Just when things looked to slipping out of RCB’s grasp, du Plessis took centrestage and rebuilt the innings in the middle overs. He put on 70-runs for the fifth wicket with Shahbaz Ahmed (26) to put RCB back on track.

Du Plessis was sensible with his strokeplay, not wasting any opportunities to score, hitting boundaries at regular intervals. He lofted leggie Ravi Bishnoi for a six over long on before a single saw him reach his half-century from 40 balls in the 14th over.

He raised the tempo after getting to his fifty, as he hit Krunal Pandya for a four and a six in the LSG left-arm spinner’s final over. A couple of fours off Bishnoi in the 18th over saw du Plessis race into the 90s, in the 18th over.

He was unlucky to miss out on a deserved century as he perished after a super 96 from 64 balls, with 11 fours and two sixes, caught at deep square leg off Holder.

Du Plessis’s splendid effort ensured that RCB posted 181/6 in their 20 overs on a wicket offering some bounce to the pacers. He was the only batter from either team to go past the 50 run mark.

RCB’s bowlers put in a disciplined effort as LSG managed only 163/8 in their 20 overs.