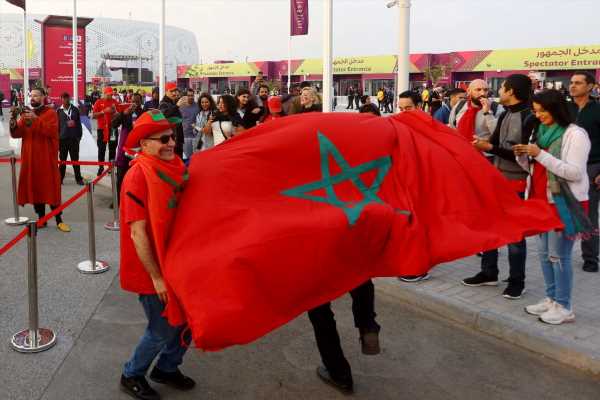 The flags, team jerseys and billboards with players are on full display in Rabat ahead of Morocco’s World Cup semi-final against France on Wednesday, but the team will have support much farther afield as the first Arab or African side to get that far.

In the Arab nations, Morocco’s exploits have particularly captured people’s imaginations during the first World Cup ever held in an Arab country and after the team posed with a Palestinian flag.

Morocco has outdone expectations by beating a succession of much higher-ranked European teams, Belgium in the group stage, then Spain and Portugal in the knockout rounds.

It has laid on more than a dozen extra flights to take fans to Qatar.

But Moroccan flags are also selling out across North Africa and the Middle East as fans rush for souvenirs to cheer on the team.

“There is a big demand for buying Moroccan flags because it is the first Arab country to reach the semi-finals. The demand is so big that they are out of stock,” said Karim Mohammed Qotb, a street vendor in Cairo.

In Gaza, Eyad Abu Teir was out shopping for Moroccan colours.

“Morocco’s win is a win for the whole Arab nation and we Arabs should all participate in it,” he said.

“Gaza is besieged and the financial situation is difficult. We hope the sales will go up if Morocco wins the World Cup,” he said.

Even as far as Iraq, people said they were excited at the prospect of an Arab country doing so well.

“It’s the best Arab performance we’ve ever seen as soccer fans and a great achievement,” said Salam Rabiea, an engineer in Baghdad.

In Morocco, an important member of the Arab League but where much of the population identifies as Amazigh, there has been some bemusement at the Arab embrace, including jokes that people from other Arab countries should finally accept the Moroccan dialect.

But in Libya, which like Morocco is in North Africa, there was no doubt in the mind of Mohammed al-Andaz as to which team he would support.

“We hope they beat France and get the cup. This is an Arab and African team. All Arabs and Muslims are praying, and we hope our prayers are met and Morocco wins,” he said.