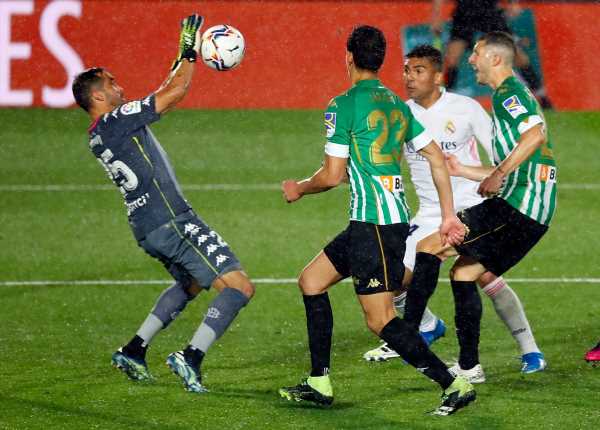 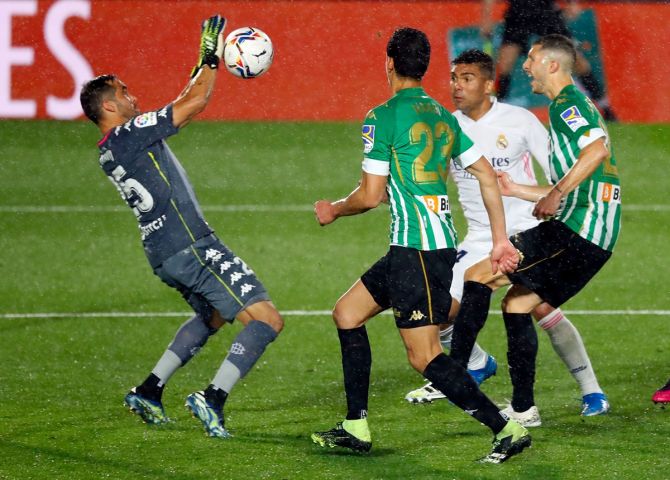 A sloppy Real Madrid were held 0-0 at home to Real Betis on Saturday in a further blow to their hopes of retaining the La Liga title.

Still depleted by a spate of injuries and stifled by a downpour and a soaking pitch, Madrid rarely got going and had few goalscoring opportunities, while Betis kept them on their toes but also failed to carve out clear-cut opportunities.

Madrid came closest with a mis-hit cross from Rodrygo in the second half which hit the bar plus a distance strike from Luka Modric which was comfortably parried by Claudio Bravo.

A second goalless draw in three league games, after last Saturday’s stalemate at struggling Getafe, left Madrid second in the standings with 71 points.

Zinedine Zidane’s side are two behind leaders Atletico Madrid, who can increase their lead to five points with victory at Athletic Bilbao on Sunday.

Barcelona will move level on points with Real with a game in hand if they win at Villarreal on Sunday while fourth-placed Sevilla can go one point behind them if they beat Granada.

One positive note for Real was the return of record signing Eden Hazard after more than a month out injured and the Belgian looked sharp in the 15 minutes he played after coming off the bench, giving him a chance of a reunion with former club Chelsea in Tuesday’s Champions League semi-final first leg.

“We didn’t play well enough to get the victory and have taken a step back in the title race,” said Real defender Dani Carvajal.

“We could have showed more hunger in the final third of the pitch and we’ve only got one point, which leaves us further away from the leaders. We couldn’t get to the right crosses or anticipate where to run in the final few metres; we didn’t get the small details right.

“We still want to send an optimistic message to the fans and we’ll fight for the 15 points left but today was a chance to put the pressure on and we didn’t take it.” 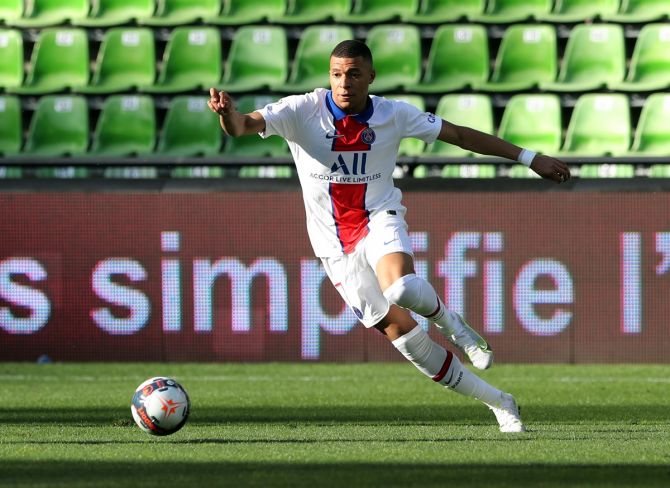 Kylian Mbappe scored either side of halftime but picked up a thigh injury as Paris St Germain returned to the top of Ligue 1 with a 3-1 victory over Metz at the Stade Saint-Symphorien on Saturday.

The France forward was substituted in the closing moments with a heavily strapped thigh, casting doubts on his fitness ahead of PSG’s Champions League semi-final first leg at home to Manchester City on Wednesday.

“We hope it’s not too serious,” PSG coach Mauricio Pochettino told reporters. “Kylian was calm when he was replaced but even a simple knock is always painful.”

PSG opened the scoring inside four minutes when Mbappe latched on to a floated pass from midfielder Ander Herrera, before smashing it past Metz goalkeeper Alexandre Oukidja.

Against the run of play, Metz scored their first goal in four league matches to equalise at the start of the second half as right back Fabien Centonze headed home a dipping cross by attacking midfielder Farid Boulaya.

PSG reclaimed the lead in the 58th minute when Mbappe capitalised on a misplaced Centonze pass, before scoring his 25th league goal of the season with a deflected effort from outside the box.

Mauro Icardi’s cheeky ‘Panenka’ penalty sealed the result with two minutes remaining as PSG moved two points clear of second-placed Lille, who have a game in hand against Olympique Lyonnais on Sunday.

The result rounded off a successful week for PSG as they remained on course for an historic treble of domestic league and cup and European Cup this season, having defeated Angers to reach the French Cup semi-finals in midweek.

“We are on the right track, there is still a month of competitive football to go, we are still in the cup, in the league and in the Champions League,” Pochettino added.

“We are battling to win all three; we want to accomplish what we want to do at the end of the season.” 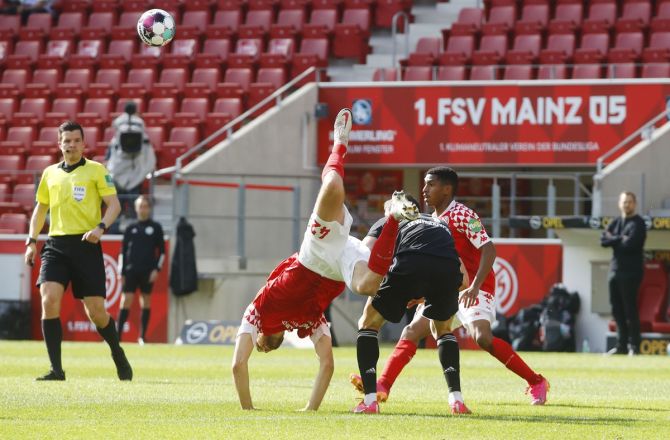 Bayern Munich squandered their first chance to seal the Bundesliga title when they lost 2-1 at Mainz 05 on Saturday and will now have to wait for RB Leipzig’s game on Sunday to see whether they have clinched their 31st German league crown.

Jonathan Burkardt stunned the visitors after three minutes, turning at the edge of the box and releasing only for Bayern keeper Manuel Neuer to turn the ball into his own goal.

The hosts enjoyed a powerful start and twice hit the woodwork in the opening 18 minutes with the Bavarian defence in disarray though Neuer made amends with a string of fine saves to keep the scoreline respectable.

The in-form hosts, unbeaten now in their last seven league games and having won three in a row, got a deserved second goal in the 37th when Robin Quaison drilled in a header from a free kick.

The Bavarians took control of the game after the break but created far too few chances until top striker Robert Lewandowski scored his 36th goal of the campaign, on his return from four weeks out with injury, with the final kick of the game.

The Pole is chasing Gerd Mueller’s all-time Bundesliga record of 40 goals in a season set in 1971/72.

“We had wanted a lot more from this game,” Bayern captain Neuer said. “Especially in the first half it was far too little from us.

“It was clear that Mainz were in good form. We created far too few chances and were then punished at the back. I would have liked to have settled everything today. This is a heavy defeat for us after the past few weeks.”

Bayern, who have three games left, are on 71 points, 10 clear of Leipzig, who play VfB Stuttgart on Sunday. The Bavarians will be champions if Leipzig lose.

Mainz, having played an outstanding second half of the season after collecting only seven points in their first 17 games, are now on 34 in 12th place and almost certain to stay up.