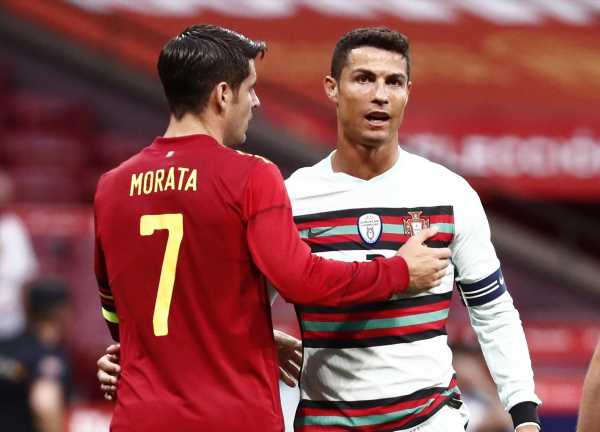 Spain and Portugal played out an entertaining 0-0 draw on Friday as both sides prepared for this month’s European Championship.

In the first international game with fans in attendance in Spain since the onset of the COVID-19 pandemic, the 15,000-strong crowd present thought Spain had fallen behind when Jose Fonte’s looping header beat Unai Simon after 23 minutes. However, it was ruled out for a foul on Pau Torres.

A nervy Simon then saw a clearance charged down by Cristiano Ronaldo. But the ball ricocheted straight back to the Athletic Bilbao stopper.

After struggling early on, the hosts were much better after the restart, with Alvaro Morata and Pablo Sarabia both missing chances.

Portugal were indebted to keeper Rui Patricio, who denied Ferran Torres from close range with two minutes remaining, before Morata hit the bar in stoppage time as Luis Enrique’s side pushed for a late winner to no avail.

“We wanted to win, but it wasn’t to be. We did some very good stuff and we’ll take that away with us,” defender Jose Luis Gaya told Spanish television.

“There’s room for improvement, but all sides have things to improve before the tournament.

“Maybe we need to get better at set pieces, which is where Portugal are really strong, but the reality is we had the best chances to win the game.”

Spain face Lithuania in their final warm-up fixture on Tuesday before the Euros kick off next Friday.

Portugal host Israel on Wednesday before they start the defence of their Euro title. Brazil beat Ecuador 2-0 in an insipid World Cup qualifying tie in Porto Alegre on Friday to maintain their perfect record and stay top of the South American qualifying group for Qatar 2022.

Everton forward Richarlison got the breakthrough 20 minutes into the second half when goalkeeper Alexander Dominguez could not stop his angled near-post shot.

Neymar then scored a penalty in injury time after Gabriel Jesus was brought down and the referee pointed to the spot after consulting the Video Assistant Referee (VAR).

The Paris St Germain striker saw his first attempt saved but was allowed to retake the kick after the referee spotted movement before the ball was struck.

Brazil were the better side for most of the match, but struggled to break down a plucky Ecuadoran side who had won three of their previous four qualifiers.

Flamengo’s Gabriel Barbosa, making his first international start in five years, had a goal disallowed for offside three minutes before half time and moments later Dominguez scooped a low drive from Neymar round the post.

The result means Brazil are top of the 10-team South America group, with 15 points from five games, four ahead of second-placed Argentina. Ecuador are third with nine.

The top four teams in the section qualify automatically for Qatar 2022 and the fifth-placed side goes into an intercontinental play-off.

Brazil’s next game is against Paraguay in Asuncion on June 8, while Ecuador are at home against Peru the same day.

Italy swept aside the Czech Republic 4-0 on Friday with a ruthless attacking display and all-around performance that could make them a dangerous side when Euro 2020 kicks off next week.

Lazio forward Ciro Immobile put the hosts ahead in the 23rd minute against the run of play when he latched onto a weak clearance and swept the ball into the net after it took a slight deflection off a Czech defender.

“It is still early to say where we can go, but we know what we are capable of,” said Napoli midfielder Lorenzo Insigne, who scored and had an assist to mark his 30th birthday.

“The coach has created a great group, he has given us the conditions to be able to express ourselves at our best.”

Euro 2020 will mark Italy’s return to a major tournament following a five-year gap. After reaching the quarter-finals of Euro 2016, they failed to qualify for the 2018 World Cup in Russia.

Italy face Turkey in the opening game of the tournament at Rome’s Stadio Olimpico on June 11 before hosting Switzerland and Wales in the Italian capital to complete their Group A fixtures.

Inter Milan midfielder Nicolo Barella doubled the lead for Italy just before the break when he dribbled toward goal and fired a shot home from just outside the penalty area.

In the second half, Italy knocked the ball around in midfield and picked apart the Czechs who could not hold possession or find any space to create chances.

Insigne made it 3-0 in the 66th minute when he took an Immobile pass and sent a sharp right-footed strike past the keeper. Insigne turned provider minutes later when he set up Domenico Beradi, who completed the scoring.

The Czechs will seek to regroup against Albania on Tuesday in another tune-up for the tournament where they will face favourites England, host nation Scotland, and 2018 World Cup finalists Croatia in Group D.